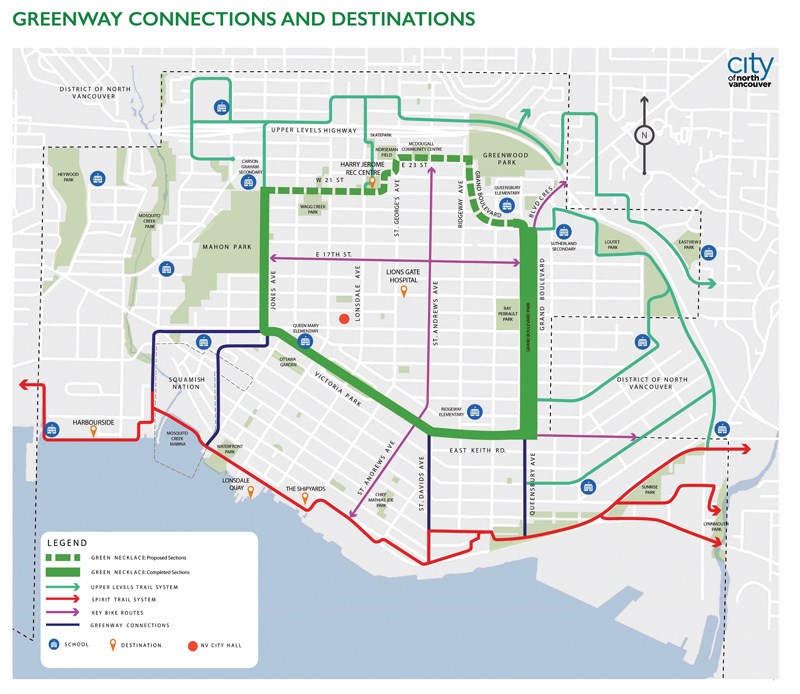 City of North Vancouver council voted unanimously to spend $3.23 million on the last leg of the Green Necklace at a Dec. 4 council meeting.

The finish line for the seven kilometre cycling/strolling path snakes over 1.7 kilometres from Lonsdale Avenue at West 21st Street to Grand Boulevard at East 19th.

While council has debated the cost of the trail, Coun. Linda Buchanan reminded her colleagues that the city pays about $2 million in annual road paving costs.

Coun. Craig Keating agreed, calling it “one of the most popular things” city council has done.

The path has been criticized, with Coun. Rod Clark referring to the trail as the “black necklace.”

However, many critics have become trail users, according to Keating.

“People vote with their feet,” he said.

Coun. Holly Back described her own change-of-heart on the Green Necklace, recalling her initial consternation.

“I am so happy that this is the final stage of it,” she said, explaining she was glad it would be finished and that: “we don’t have to talk about it again.”

“It’s all great to say we love it until it’s in front of our house,” he said, referring to opposition around the trail’s route past Grand Boulevard and West 21st Street.

The trail is loosely based on city founder Edward Mahon’s 1907 notion of a boulevard circling the city surrounded by parks and gardens.