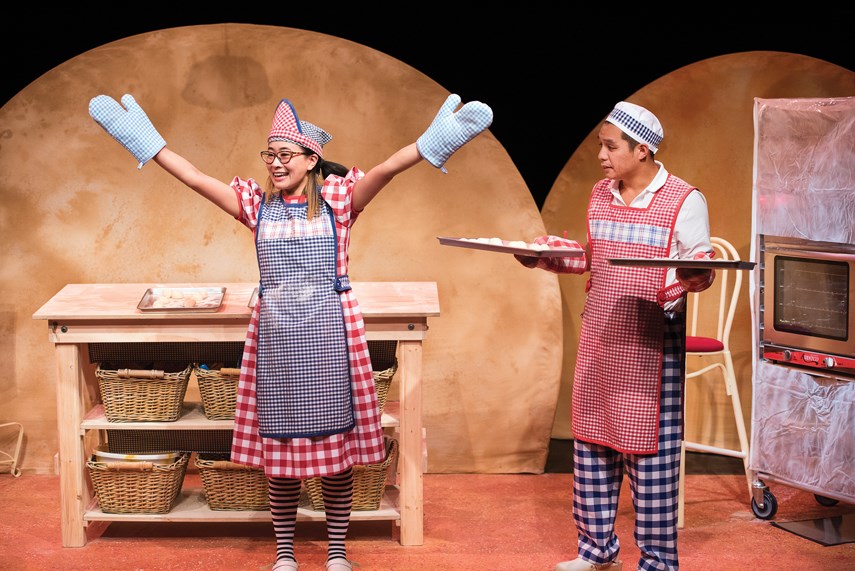 It’s a truth universally acknowledged that kids like to play with playdough, except when they’re given the opportunity to play with actual dough.

An upcoming production at Presentation House Theatre is aiming to give kids and their parents the opportunity to get their hands dirty with yeast, flour, salt and water in Holiday Baking Time, running from Dec. 6 to 16 at the North Vancouver theatre.

The show will feature plenty of baking antics, live music, audience interaction and participation, as well as a charming story involving characters Bun and Bap and the tale they spin, according to Kim Selody, the theatre’s artistic director and co-creator of Holiday Baking Time.

“At this particular time of year there’s always a celebration and the celebration involves food,” says Selody. “We’re going to be baking a lot of bread.”

The original production of Baking Time was created in 2002, when Selody collaborated with artistic director Tim Webb of Oily Cart Theatre in the U.K. to create an immersive theatrical experience for young children and their families.

The loose plot of the show means that when audiences enter the theatre, they’re actually entering a makeshift bakery, with bakers Bun and Bap getting ready to bake bread for a big holiday party.

“Everybody’s common goal is to become junior bakers,” says Selody, adding that the audience is tapped to help Bun and Bap with their task. “We make a little dough ball for every single person in the audience and then it gets put into the oven, and then what do you do while you’re waiting for the bread to bake? They make up a story about a little baby loaf of bread (named Loafy) and the adventures that the little loaf goes on.”

All of the action is draped in a charming live musical score featuring cello, accordion and percussion, notes Selody, adding that the live music component is a step up from the original production which used a pre-recorded soundtrack.

“One of the parts that I feel particularly that they always love is when they go into the mysterious bread forest, and it’s very mysterious and very atmospheric and the music is really complex and interesting and you can hear a pin drop in the theatre because the children are so riveted in that moment about what possibly could happen next,” he says.

The show – originally just called Baking Time, the “Holiday” part was recently added – is a well decorated production, having won a Jessie Award last year and a Dora Award back in 2004 for youth theatre.

Following a string of recent successful showings in Vancouver and throughout Canada during the last few years, Selody says he’s excited to bring this holiday iteration of Baking Time to the North Shore.

“For us the goal is to bring people together at that time of year who may be coming from different cultural backgrounds,” says Selody. “What we’re doing now is we’re bringing it back to our own theatre at this holiday time to see if it’s something that the local people would be interested in seeing as a kind of tradition.”

The shows on Dec. 6 and 13 are Pyjama Play Nights, with audiences encouraged to see the show wearing their favourite comfy PJs.

And while every audience member will get to go home with a small sampling of freshly baked bread, Selody adds that there’s options available for guests that can’t eat gluten or wheat too.

Older and Wiser: Let's look forward to brighter and better days by taking care of our eyes
Feb 28, 2021 9:05 AM
Comments