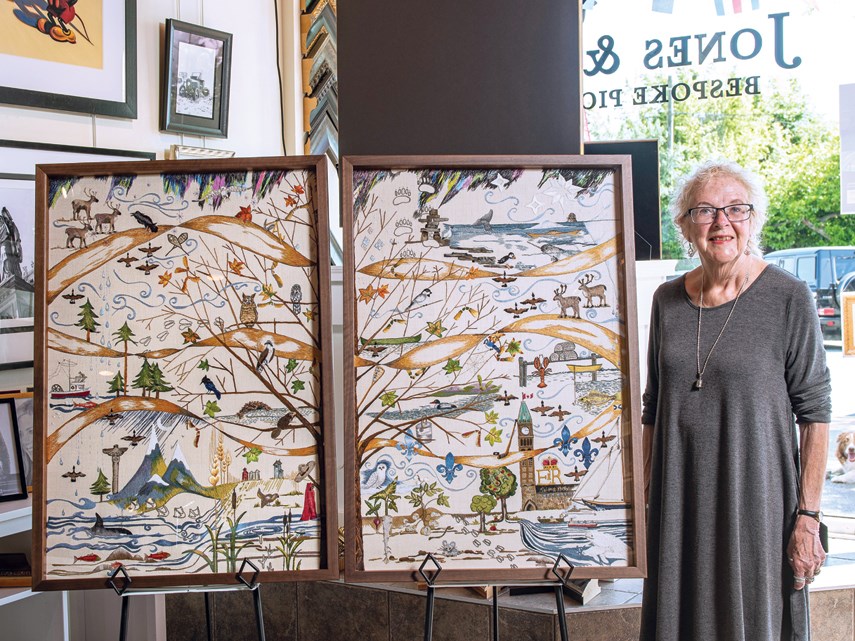 There were paintings and there were busts, but where were the textiles?

That’s the thought that went running through the minds of a contingent representing the Embroiderers’ Association of Canada during a trip to the nation’s capital more than five years ago.

“We had our national conference in Ottawa in that time and there were a group of people who went on a tour of Rideau Hall, the Governor General’s residence, and they saw all the artwork that was there and everything – and they realized there was no textile art,” explains Helen McCrindle, a longtime embroiderer and professional kilt maker from West Vancouver. “That was their impetus to start a project to do something about that.”

It was May 2014. The Embroiderers’ Association decided to undertake a project which would engage with Canadian identity as well as get the association’s diverse member base involved.

With Canada 150 just a few years away, the association and its 39 nationwide chapters got to work. McCrindle was named project leader, along with lead designer Catherine Nicholls, for what would become the Canadian Embroidery Tapestry project.

More than 650 Canadians of all ages and origins threaded needle on the project and more than 8,000 hours of work were recorded, according to McCrindle.

“I had to be sure that I knew where the project was at any one time and there were people responsible for it. I had to develop a whole set of instructions,” says McCrindle. “We took it upon ourselves to do the project, to fund it, and to present it to the government of Canada.”

Their efforts were not for nothing. The association recently learned that after years of putting the finishing touches on its project, the Canadian Embroidery Tapestry had been accepted into Canada’s Crown Collection.

“We had to wait until everything was finished, it was mounted and framed and professionally photographed, and then that proposal went in last September,” explains McCrindle.

The Crown Collection includes more than 7,000 objects, including contemporary and antique art and furnishings, books, rugs, and other objects owned by “the sovereign in right of Canada,” according to the National Capital Commission’s website.

Many of the items in the Crown Collection are used to furnish the country’s official residences, such as Rideau Hall.

“We don’t know where they’re planning to put this, but we’re hoping that it will be in an area that is accessible by the general public,” says McCrindle.

Across two large panels Canadians from all over the country have left their mark through embroidery. The project features a maple tree at its centre, with birds representing the country’s different provinces and territories hanging off its branches. Three golden ribbons wind and twist across the panels — representing the Trans-Canada Highway, railway, and the Great Trail — uniting the country, according to McCrindle.

“There’s rainfall coming down in the West Coast, and the totem poles and the forest going into the Prairie land,” she says. “Moving a little bit further east, we get into the Peace Tower of the Parliament Buildings, and the East Coast fishery and the lobster.”

The Canadian Embroidery Tapestry is currently stationed at a framing shop in West Vancouver, as final arrangements are made before it makes its way to its final destination in Ottawa.

Asked what it means to have the piece accepted into the Crown Collection, McCrindle touches on the theme of bringing people together and not letting things grow apart.

“It means that we’ve brought a lot of Canadians together with one purpose — and it’ll be there for a long time.”