The driver’s eyes darted from sidewalk to sidewalk as her car whispered around the block for the third time. She was looking for someone. The someone in question was wet and cold and not in the mood to deal with the driver. And yet she persisted.
Dec 23, 2017 10:30 AM By: Jeremy Shepherd 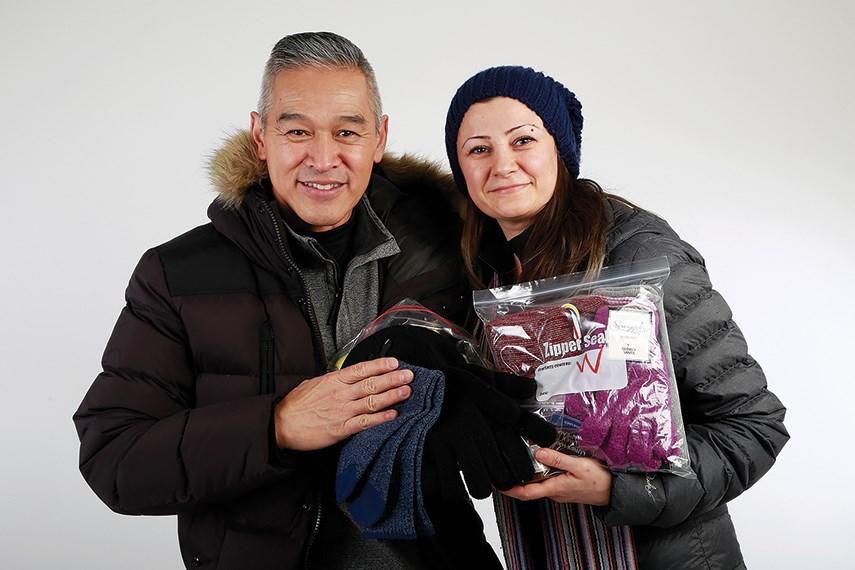 The driver’s eyes darted from sidewalk to sidewalk as her car whispered around the block for the third time.

She was looking for someone.

The someone in question was wet and cold and not in the mood to deal with the driver. And yet she persisted.

I have something for you, Sahar Manochehri remembers saying.

“What could you possibly have?” the man asked, hustling away from her.

Give me a chance, Manochehri insisted.

She produced a Ziploc bag. Inside was a toque, gloves, knitted wool socks, a rain poncho, hand warmer packets, and, because it’s Christmas, a candy cane. For homeless women, the packages include hand lotion and hygiene products.

The explanation sufficed, Manochehri says, smiling as she describes the man putting on a poncho faster than she’s ever seen anyone don a poncho.

“At that moment, I don’t care if you’re a criminal, to me you’re another human and I just want to make you feel good for five minutes.”

Manochehri and her husband Randy Wong are the founding members of Warming the Homeless.

For the fourth consecutive year, the duo are spending the year’s coldest months handing out as many packages of warm clothes as they can.

Like surfers waiting for their wave, Wong and Manochehri spend autumn surveilling clothing retailers and waiting for the new toques and gloves to arrive.

They usually swing from store to store, gathering as much as they can – so long as it meets their standards.

Manochehri appraises each piece of clothing, ensuring the gloves are double layered, the toques are thick, and the ponchos can stand up to the North Shore’s tireless rainfall.

But preparations for the coming cold of 2017 were initially sluggish as Wong and Manochehri watched donations trickle in.

But then the trickle turned into a snowball, thanks to a Lynn Valley resident known only as Tom.

Tom asked the couple what they needed this year. Well Tom, they replied, we’re always looking for socks and gloves.

He furnished them with 200 pairs of each.

With a little help from their friends, Wong and Manochehri are hoping to hand out between 250 and 300 packages this year.

“We’re fortunate enough that we do have a warm home to go to,” Wong says. “What about those people who don’t?”

“I haven’t given anything to anybody lately,” she recalls thinking.

Reflecting on the hands of the homeless, she decided to give out $50 of gloves.

On hearing his wife’s idea, Wong found himself thinking about feet, and decided to contribute $50 of socks.

Homeless people often suffer corns, calluses, as well as infections in their soles and toes.

Pretty soon they had a package. But getting those gloves and socks on the right hands and feet was another challenge.

When the first snow drifted over the North Shore in 2016, Manochehri recalls forcibly nudging her husband awake.

The Ziploc packages were welcome at the shelter, but Wong is well-aware they’re also needed elsewhere.

There are many homeless people who avoid shelters and sleep rough, Wong explains.

Getting packages to those people can require a lot of diligence and little luck.

Spotting a homeless man, he flipped on the lights, pulled a U-turn and got out of the car.

“How many cops have literally come up to him (and said): ‘What are you doing here?’” Wong explains.

But they got to talking anyway. Whitely wanted one thing: a blanket.

He found the blanket, but for months he couldn’t find Whitely.

The blanket went from the trunk of Wong’s police cruiser to the trunk of his car as he kept waiting to run into Whitely.

Finally, Wong and Manochehri spotted Whitely at a Tim Hortons on Marine Drive.

The three shared a coffee and Whitely finally got his blanket.

Hot drinks have also become part of Warming the Homeless, as Wong persuaded some of his fellow officers to contribute McDonald’s coffee stickers to a communal card that can help a homeless person get a hot cup on a cold night.

Wong has managed to get police officers and firefighters to hand out the packages, and he’s hoping to involve B.C. Ambulance.

However, he’s gratified to see the packages have migrated down highways and across bodies of water, turning up in Chilliwack as well as Vancouver’s Downtown Eastside.

“Our goal and dream is to have a package in everybody’s hand, it’s not a territorial thing, it just happens to be born out of the North Shore.”

The program seems to have made life a little better for some homeless people, Wong says, noting that he’s run into guys who still have the Ziploc bag a year later.

Manochehri and Wong are also hoping to ease a stigma that remains pervasive around homeless people.

Manochehri recalls seeing parents pull their children away from a homeless man on Lonsdale Avenue, “as if that person’s a monster.”

“We really have to break that stigma,” Wong agrees.

But it’s also about giving hope to people who have lost everything.

As more people struggle to keep their place in a sometimes unforgiving economy, Wong says he’s seen a lot of people without hope.

“It warms my soul,” he says, “to see the look on their face and how important this is to them.”

“But it starts off with something.”