Bowen birds getting a head start on Valentine’s Day: it's breeding season 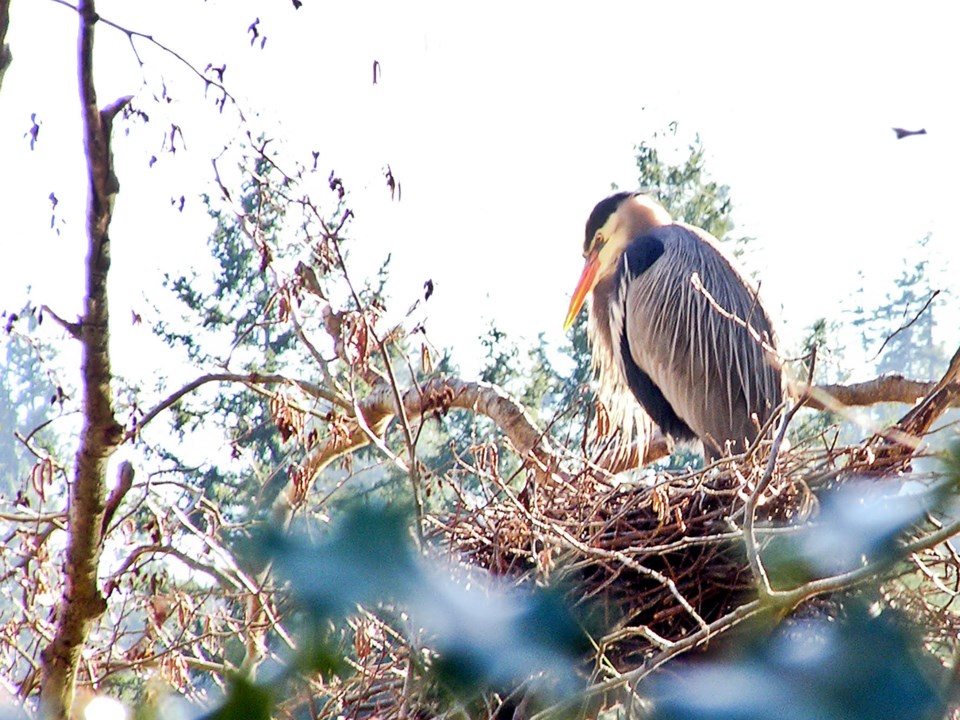 Spring may feel very far away, but love is in the air for the many birds already scoping out territory and mates. Here are a few of our local favourites that are already getting busy.

Anna’s hummingbirds start nesting and breeding as early as December. Their tiny 2.5 to 4 cm nests are made primarily of willow and leaves and bound together with spider webs. The outsides are decorated with mosses and lichen, making them well-camouflaged among shrubs and garden plants. Some will nest in Douglas fir trees or on man-made structures. Their pair of jellybean sized white eggs nestle one to three metres above the ground, where hatchlings will stay for three weeks before venturing out.

Barred owls are breeding by mid-January. Unlike the hummingbirds, which take great effort to build their nests, barred owls simply find a deep tree cavity, an abandoned platform nest or a 30x60 cm human-made nest box and add some “padding,” consisting of feathers, fresh conifer spray and lichen. They lay one to five white eggs, which are slightly smaller than a chicken egg, and keep watch over their brood for four to five weeks before the young will attempt their first flight from their 6 to 12 m perch.

Great blue herons return to their previous year’s nest in February to start making repairs. Herons breed in colonies of up to hundreds of nests, mainly in trees 30 m off the ground but sometimes among wetland grasses. The male brings branches to the female, who builds a platform, then creates a cup of grasses, leaves and mosses within which to lay her two to six pale blue pool cue ball-sized eggs. Hatchlings stay in the nest for seven to 11 weeks before their first glide to the ground.

Bald Eagles lay their eggs before the end of February. Both male and female will build or rebuild a nest using sticks, grass, moss and even seaweed. While a couple’s first nest might be small, every subsequent year they rebuilt it, it gets bigger and bigger––up to 4m deep and 2.5m wide. With such a large nest, they need to pick the biggest and strongest old-growth trees to support its weight. Usually they will build in the tallest tree around but not right at its crown. Rather, they will tuck their nest next to the tree’s trunk, about one quarter of the way down. They will commonly lay one to three dull white eggs, about the size of baseballs. The hatchlings will stay for 10 to 12 weeks before they fledge.

Ravens breed in late February. They find or break sticks about 1m long and weave them together to form a basket-like structure in a high crotch of a tree, on a cliff beneath an overhang or on top of a man-made platform, such as can be found under a bridge, or on a telephone pole. Inside the nest, smaller branches, mud, fur, bark and grass form a tighter lining in which to lay their three to seven golf ball-sized eggs. These eggs can be green, olive, or blue, often mottled with dark brown. The hatchlings will stay in their nest for four to seven weeks before making their leap.