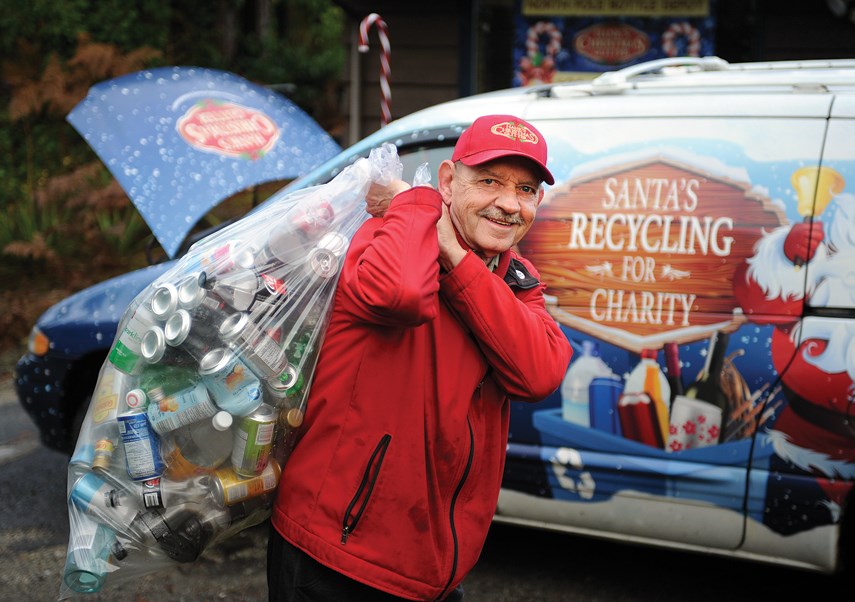 A North Vancouver resident who all year embodies Saint Nick’s generosity and passion for spreading joy is in need of a new sleigh.

Hank Brennan, who for years has used one of Santa’s old sleighs (actually, a 1998 Grand Voyager) to collect returnables and share goodwill, is hoping to receive a little goodwill himself so he can continue to turn bottles and cans into nickels and dimes – and thousands of little smiles.

“It’ll make a huge difference,” says Brennan, on upgrading his minivan – in urgent need of costly repairs – to a full-size van. “I’ve outgrown the size of it because of the amount that I’m picking up. I’m doing double duty on the road because I get full and have to drive back to the sorting facility.”

Brennan’s sorting facility is at an old house in Edgemont Village. Year-round at the facility, Brennan and a few volunteers organize and process hundreds of thousands of returnables culled from businesses, buildings and individual homes stretching from Horseshoe Bay to Deep Cove.

Funds raised from turning in the bounty of pop cans and beer bottles are converted into gift cards that Brennan humbly gives out to people in the community in need of a little extra cheer.

He always has the gift cards on him. They’re not for a lot – a hot cup of coffee at a local coffee shop, a meal at a fast food joint, the means to buy food at a grocery store – but anyone who has ever gone through tough times knows it’s the little things that can make a huge difference.

“This is what we do all year,” says Brennan. “I’ve gotten to know people so well over the years.”

Most of the North Shore residents that Brennan is supporting are experiencing homelessness in some form, either fully street entrenched or going through a period of unstable housing.

Brennan lights up almost as much as the people he’s helping when he has the opportunity to stop, chat a little bit and be on his way after giving his new friend an extra helping hand, he says.

“I still get kind of caught up in it, but it’s true,” he says. “I love helping people.”

While Brennan has always been a compassionate, charitable soul, his recycling project – which all year goes by the formal name Hank’s Christmas Glitter, as the festive “Santa’s Recycling for Charity” decal emblazoned on the side of his old minivan can attest – kind of started by accident.

Over the years, Brennan has worked in the printing industry, as a videographer, and has managed apartment buildings on the North Shore. But in 2006, he was in need of a vacation.

He decided he’d raise money to take himself on a cruise by collecting bottles and cans, tasking his friends and family to save up their returnables to lend a hand to the cause. After less than a year, he raised about $6,000. Realizing that he didn’t have to stop collecting recyclables after his bon voyage, he decided to keep at it for charity.

In 2008, he started in earnest. “Pretty much all my life I’ve been that way. I needed to do something meaningful, and this was a no-brainer,” he says.

Currently, Brennan is the de facto bottle collector for more than 700 buildings and individuals across the North Shore. Some folk call in when they need him to come collect, while he has agreements with other buildings to pick up their beverage containers on a weekly basis.

Back at the sorting facility, Brennan goes through the day’s haul along with his volunteers, including his brother Steve, who was drawn to the cause after living through homelessness himself back on the cold streets of Toronto.

“He is my head elf,” jokes Brennan. “He went through this, and he knows what this is all about.”

Brennan and company have been extremely busy this year. When the pandemic hit earlier this year, bottle depots, liquor stores and grocery chains weren’t accepting bottles and cans, notes Brennan. Coupled with the fact that many people were holed up at home and possibly consuming more than usual, Brennan says his phone hasn’t stopped ringing, estimating he’s brought in thousands of dollars a month this year that’s mostly earmarked for gift-card giving.

Other funds raised every year go towards supporting local charities, such as Harvest Project and Lookout Emergency Aid Society, in addition to gas and other expenses for getting around the North Shore — though the decrepit state of his vehicle is currently burning through more money that he’d rather be giving away.

December, a month that Brennan describes as “wicked, just wicked,” is particularly busy. There’s more cheer that needs to be shared, more bottles and cans that need to be collected, and stocking stuffers replete with toiletries and other essentials that need to be given out, he says.

While Brennan admits he feels sheepish asking the community for funds for his new van, he says it’s urgently needed if he’s to keep on playing Santa year-round.

“If I was going to get tired of this, it would have happened a long time ago. But it hasn’t. This is where my heart is,” he says. “I think about what these people are going through every day.”

To connect with Brennan a.k.a Hank’s Christmas Glitter about his recycling for charity program, click here.