Maplewood Farm recently welcomed a new, albeit temporary, addition to its sheep pasture and it’s not what you might think.
Jul 5, 2017 10:11 AM By: Richard Walton 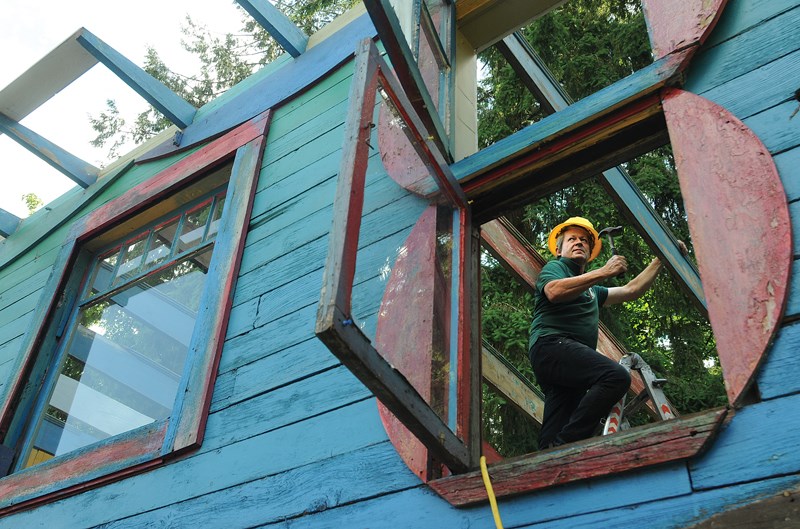 Maplewood Farm recently welcomed a new, albeit temporary, addition to its sheep pasture and it’s not what you might think.

The much-loved blue cabin, a remnant of the squatter community that once existed along the shores of Burrard Inlet, will briefly call the farm home as it is repaired and remediated before starting a new lease on life as a floating artists’ residency, next spring.

For more than 80 years the blue cabin lived on the foreshore of a small cove between Cates Park/Whey-ah-Wichen, and McKenzie Barge & Marine Ways. It was initially built as a home for a Norwegian carpenter who was working at a nearby shipyard. In 1966 it became home to writer/musician Al Neil who was later joined by his partner and fellow artist Carole Itter.

Neil, Itter, and their blue cabin were part of an established squatter and artist community that existed along the shores of Burrard Inlet from Maplewood mudflats to Cates Park/Whey-ah-Wichen. The community included several artists, such as renowned writer Malcolm Lowry, who preferred life off-the-grid.

In the late 1970s the unsanctioned cabins were removed by the District of North Vancouver and Port Metro Vancouver; however, the blue cabin remained thanks to its location on the McKenzie Barge land.

In 2015 Neil and Itter had to move out of the blue cabin, after Polygon Developments purchased the McKenzie Barge land. As part of the land deal Polygon agreed to remediate the surrounding area, including the foreshore area where the blue cabin stood.

When word of the cabin’s uncertain future got out a grassroots movement took shape aimed at preserving this little but distinct piece of local history. A blue cabin committee was formed and it led the efforts to move, repair and restore the cabin. The committee sourced a short-term storage site for the cabin while they worked to secure its long-term future.

Members of the local art community came up with idea of repurposing the cabin as a floating artists’ residency, which garnered much support throughout the local community. The committee has worked tirelessly to secure funding for this project which will eventually see the refurbished cabin mounted on a barge or floating platform.

The committee needed a secure location to renovate the blue cabin and Maplewood Farm was a logical, local choice.

The district’s parks department agreed to temporarily house the cabin at the farm while it is renovated. Over the next several months the cabin will undergo a series of restorative interior and exterior repairs, and a basic electrical system and a gas heater will be installed. Next summer it’ll be set afloat, ready to welcome its first artist onboard.

Thank-you to all the dedicated volunteers involved in this project including blue cabin committee members: Glen Alteen, Barbara Cole, Esther Rausenberg, Michael Jackson and Marko Simcic, whose initiative means that part of our community’s history will be preserved for future generations.