Heritage centre window to BC Parks’ past

Lucien Campeau is like a kid in a candy store, standing inside an old ranger station built in 1948 at the base of Mount Seymour. This Heritage Centre houses vast amounts of memorabilia and documents dating back to the early BC Parks days.
Mar 8, 2018 3:13 PM By: Maria Spitale-Leisk 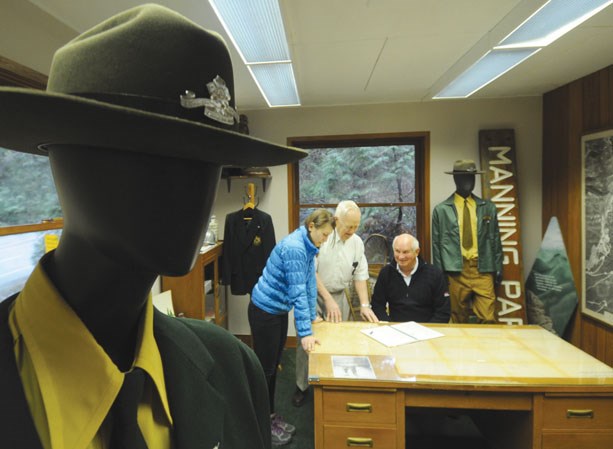 Lucien Campeau is like a kid in a candy store, standing inside an old ranger station built in 1948 at the base of Mount Seymour.

This Heritage Centre houses vast amounts of memorabilia and documents dating back to the early BC Parks days. One wall is decorated with vintage snowshoes, while against another rests a wooden and weathered Manning Park sign. The dogwood emblem is splashed about the space.

Campeau started with BC Parks in 1957 and would spend winter nights plowing the road up Seymour, steps from where he is standing today. In those days the crews would use snow blowers.

“Of course it was a cow trail up there, not the roller coaster that it is today,” says Campeau, referring to the layout of Mt. Seymour Road.

Campeau dedicated his entire career to BC Parks and was rewarded by being immersed in unspoiled nature while he worked at many sites throughout the province.

Back inside the old ranger station, Campeau can’t help but point out fascinating details about the building.

“During Mr. (John) Diefenbaker’s reign, this was the bomb shelter for the Lower Mainland,” says Campeau.

In the main room of the Heritage Centre, used for outreach programs, there are wood carvings dating back to the 1950s. At one time BC Parks had their own carver on staff.

Inside the old superintendent’s office, the contents of which remain preserved, Campeau cringes a little at the sight of the old yellow and green park uniforms.

“We always cursed this colour,” he says with a laugh.

There are retired employees like Campeau, conservation advocates passionate about BC Parks, who are part of an independent society which has its headquarters in this old ranger station. The Elders Council for Parks in B.C. participates in volunteer projects aimed at ensuring the longevity and well-being of the parks system.

The Heritage Centre at the base of Seymour is an unassuming building rich with history. This is one of the last two remaining ranger stations from that era – with a companion station in Manning Park.

The building recently underwent $50,000 in improvements, made possible by grants from the province and the Canada 150 program.

A scanner was purchased to bring archival photos and documents into the digital age. Archival parks documents from across the province are broken down by region and safely stored in climate controlled cabinetry, which looks like a modern glass wine cellar.

Among the vestiges, a framed receipt from 1913 for eggs, milk, bacon and other food staples purchased by workers staying at Strathcona Provincial Park, the oldest one in the system.

“This is the type of memorabilia we’ve been able to preserve,” says Mel Turner, an Elders Council member who worked for BC Parks for 30 years, starting as a research assistant and ending up as a regional director in this old ranger station.

The upgraded building has been made more accessible for those with disabilities, through the replacement of carpet with hardwood and upgrades to the washroom.

The Heritage Centre offers public education on the BC Parks system and serves as the staging ground for numerous interpretive programs. The Elders Council’s free outreach programs are created with older adults in mind, however anyone is welcome to participate. Walks and hikes are typically on flat- to low-incline groomed trails and boardwalks.

Programs are held indoors at the Heritage Centre, in Mount Seymour Provincial Park or in Metro Vancouver regional parks and provincial parks.

Currently, the Heritage Centre is recommended for designation as a District of North Vancouver heritage building and as a provincial heritage site.

“This is a park building so I’m anticipating that it will be here for a long time,” says Turner.

The Heritage Centre is open to the public Monday to Friday from 10 a.m. to 2 p.m., except holidays. History enthusiasts are also encouraged to volunteer at the centre, to help with research and outreach programs.