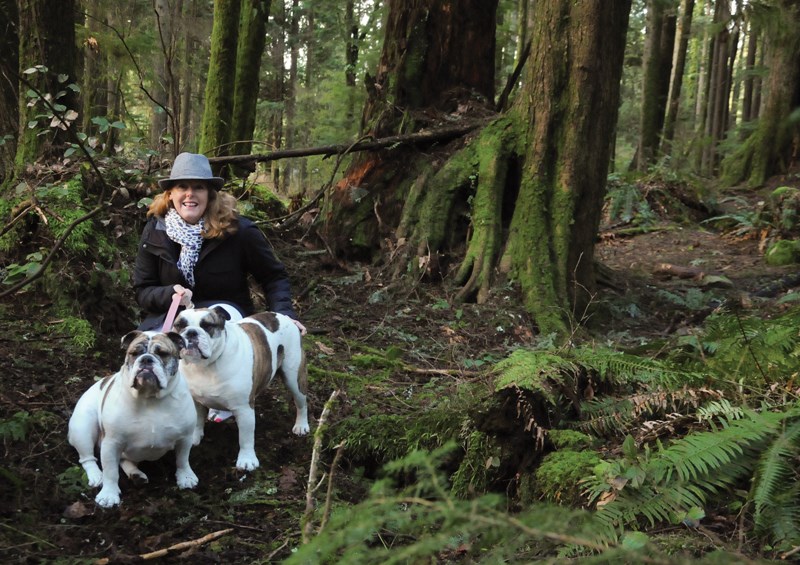 On a Friday night last month Jennifer Hewlett did what she often does at the end of the week: she spent time with some of the important women in her life.

This specific evening, her friends insisted on going out.

They instructed Hewlett, who lives in Deep Cove, to dress nicely because they were going to a fancy restaurant. Always the crowd pleaser, she agreed.

Afterwards, they just so happened, or so it would seem, to pass by North Vancouver’s Centennial Theatre.

That evening, Feb. 10, the theatre was hosting the opening night of the Vancouver International Mountain Film Festival and they decided to attend.

Hewlett’s an outdoorsy type, to say the least. In fact, this love for the outdoors has led her to spend quality time with the important women and people in her life most days, not just Friday nights, for the past 20 years.

In 1997 Hewlett founded Fresh Air Life, an organization that combines fresh air and friendship with a passion for outdoor recreation, nature, and social action.

Sitting in the crowd that evening during the VIMFF’s opening ceremony, it dawned on Hewlett that her friends might have had an ulterior motive for bringing her out.

Her suspicions were justified.

As the night rolled along, she slowly became aware that she had been nominated – and won – the prestigious 4th annual Tim Jones Community Achievement Award, presented by the VIMFF and North Shore Rescue.

“It came as quite a surprise,” Hewlett says. “I love an audience but I was not prepared, I assure you.”

It would seem natural that Hewlett does well with an audience, as most days she leads groups of diverse women from around the Lower Mainland and elsewhere on hikes, outdoor excursions, and adventures.

Her outdoor playground is primarily the North Shore mountains, where she is a master of the off-the-beaten-track trail. She also finds time to take women on plenty of snowshoeing, kayaking, canoeing, and trail running outings.

“I just provided a venue that had fresh air and friendship. Those two elements have really, really made such a difference in so many peoples’ lives,” she says. “I think over the last 20 years we’ve done so many things.”

Most recently, she’s taken her hiking group on a challenging trek through part of the Canadian Rockies. “We really like to explore fresh air destinations. I think it’s really important to keep exploring, to keep moving,” Hewlett says.

She estimates that over the years upwards of 1,200 women have participated in Fresh Air Life activities. She sounds shocked when describing the vast number of women she’s helped connect over the years, mainly because, like many great things, her organization had a humble start.

Two decades ago, after having walked her two young kids to school at Dorothy Lynas elementary in Deep Cove, she decided to deviate from her usual path and trek through an outdoor trail near her home.

“I would just go on my way and every day drop the kids off at school,” she says. “They’d turn right, I’d turn left. And before I knew it, there were several women that would say to me ‘Jenn, can I join you?’”

Hewlett says at first it was just a bunch of women taking time out of their day to socialize, get outside, and enjoy the North Shore’s natural beauty. “I would just collect all these fantastic women’s names and numbers and let them know,” she says. Before too long, the group had ballooned and Hewlett decided to make their excursions more organized by forming Fresh Air Life.

She’s always felt particularly attuned to getting around the North Shore wilderness – her family first arrived in the area in 1903 – and her reason for making Fresh Air Life a venture particularly suited to women was simple: “I believe that they are the foundation of our community.”

“We all have very busy lives, but I do believe that the women in our communities are the silent heroes,”
she says.

Those who know Hewlett and have been part of the work she does with Fresh Air Life describe her warmly as a great “connector,” someone who brings people together for a shared purpose.

“She never fails to reach out to people and she seems to have this amazing ability to sniff out people who need someone to reach out to,” says Denise Callaghan, an active Fresh Air Life member who directs much of the organization’s volunteer work. “To say the word ‘connector,’ that’s sort of what Jenn does.”

Another Fresh Air Life member, Kathy Rothnie, says the hiking aspect of Hewlett’s organization has helped her connect more to the North Shore. She adds that volunteerism has played a big role in the last many years as well.

“I would say through these volunteer initiatives that she brings us to that quite a few of the ladies have continued that volunteer experience, if you like. She kind of sets things in motion and gets us going and then people run with it,” Rothnie says.

A few years back Hewlett had an epiphany that the meaningful connections she was making with other women could be used as a way to give back to the community.

Since then, she has been devoted to getting women involved in charitable causes, most notably with Mission Possible, an organization that provides services and necessities for people living in poverty on Vancouver’s Downtown Eastside. But sometimes helping others means helping those directly around you first.

Hewlett won the Tim Jones award because of her meaningful contributions to the North Shore community, and much of that service has just meant being there for the women around her.

Since winning the award last month, she is looking to give back even more. “If there’s ever anything I need, or a call-to-action, I’ll email the alumni. My next mission is really more of an environmental and protectionism mission,” she says, citing the importance of protecting the wonder of the North Shore and its environment.

She’s confident mobilizing Fresh Air Life and its group of dedicated women can be part of the solution.

“The hills are alive with the sound of women somewhere,” she says.