Amid pressure from an industry group and a rising backlog of permit applications, Vancouver city council will vote on whether to delay a zero-emissions building plan slated to come into effect next year.
Jun 8, 2021 1:54 PM By: Stefan Labbé 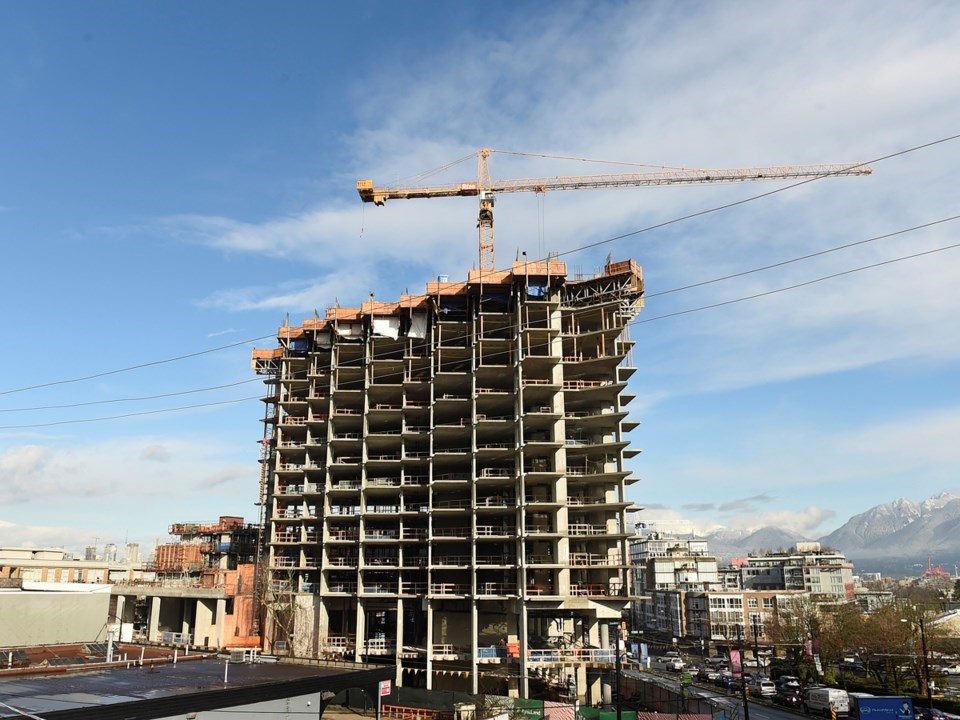 The Independent building on E 10th Ave. and Kingsway. Starting Jan. 1, 2022, a zero-emissions building plan would require electrification of heating systems as part of Vancouver's climate change plan. Council will vote Tuesday on whether to delay the plan to clear a permit application backlog.Dan Toulgoet

A heating and plumbing industry lobby group is calling on Vancouver to delay its roll out of a zero-emissions building plan, claiming “gaseous fuel” should have a place in the city’s future as it moves to reduce emissions.

In a letter addressed to Mayor Kennedy Stewart, the Canadian Institute of Plumbing and Heating criticized the city’s decision to move ahead with its climate plan as businesses struggle to recover from COVID-19, saying it will unfairly raise prices for people trying to buy a new home.

“The program proposed by the city clearly sets its sights on those least able to afford it within the second-least affordable city, rather than on other industries,” wrote the lobby group.

The industry group is calling on Vancouver to delay its zero-emissions building plan by up to two years, a plan set to ban gas appliances by Jan. 1, 2022, with the exception of gas fireplaces, ranges and barbecues.

The plan is part of the city’s 2020-2025 Climate Emergency Action Plan designed to move Vancouver toward reducing emissions by 50 per cent by 2030.

As of 2019, 54 per cent of carbon emissions in Vancouver came from natural gas use in buildings.

The industry lobby group isn’t the only one calling to delay the city’s zero-emission building plan. Vancouver city staff is recommending the city delay the plan due to a backlog in building permit applications — one of several measures meant to speed up the construction of new homes.

Among those measures, staff recommend temporarily suspending parts of the protection of trees bylaw to cut down about 200 trees in the way of development.

By not following through on the recommendations, city manager Paul Mochrie wrote that workers face “significant moral and burnout challenges” made worse by the pandemic.

“The COVID-19 pandemic has created a perfect storm due to the volume and complexity of projects requiring permits, while at the same time resulting in a dramatic shift in city staff working from home but without the necessary, supporting technology infrastructure,” wrote Holmes in a recommendation to council.

The call to delay the zero-emissions building plan has prompted 71 speakers — from environmental groups to developers — to speak out at a virtual council meeting Tuesday.

Melissa Lem, a family doctor and president-elect of the Canadian Association of Physicians for the Environment (CAPE), says she was moved to speak before council on behalf of her patients.

“In a climate emergency, natural gas has no place in our homes,” she tells Glacier Media.

Lem, who works across B.C. in rural communities, pointed to her patients who struggled with wildfire smoke blanketing the region last summer. Phasing out natural gas in homes will also inevitably mean fewer gas ranges in peoples’ homes, reducing exposure to harmful gases, she says.

“When the gas burns on these ranges, it worsens air pollution below Health Canada’s guidelines,” says Lem. “There’s a lot of research that tells us that kids and adults with asthma and chronic lung diseases are harmed by carbon monoxide, nitrogen oxide and formaldehyde that gas-burning stoves release.”

Others say delaying the plan is necessary to get Vancouver's permit processing house in order.

In an email to Glacier Media, Ron Rapp, chief executive officer of the Homebuilders Association of Vancouver, says his organization fully supports delaying the zero-emissions building plan by a year and that a “delay is not going to have a significant effect” on the greenhouse gas picture for the City of Vancouver.

Pointing to “hard choices,” Rapp says Surrey cut the average time for a single-family home permit to 10 weeks, just a little more than the time it currently takes to get an appointment to make a permit application in Vancouver.

Not everyone in the development industry agrees.

Dave Ramslie, vice-president of innovation and sustainability at Concert Properties, says he understands the city’s move to speed up development applications, but delaying climate action does little to speed up building times, even as the city faces a housing crisis.

“We’re really concerned about processing and permit times,” says Ramslie. “But the idea that it takes longer for a city to approve an electric building as opposed to the gas building? It just doesn’t make sense.”

Ramslie says delaying the move to reduce carbon emission from buildings “sends the wrong message to industry” and that by weakening the resolve to follow through on the city’s climate commitments “the work we’ve done based on what they’ve told us won’t matter.”

The industry group’s claim that banning gas appliances in new builds would penalize new homebuyers already struggling to get into the market doesn’t add up, he says, especially as the price of a single-detached home in Vancouver sits at roughly $1.5 million.

“It’s not the electrical versus natural gas that is pricing people out of the market,” says Ramslie.

“If council has heard from industry groups to slow down [on climate change], council needs to know there are others out there that say don’t stop.”

DANGEROUS SIGNAL TO OTHER CITIES

Slipping outside of council chambers Tuesday, Coun. Christine Boyle says the call to delay the zero-emissions building plan could have massive implications, not just for Vancouver’s climate targets, but for other municipalities following the city’s lead.

“I think it sends a dangerous signal to other municipalities,” says Boyle. “Vancouver has one of the most ambitious and comprehensive climate plans across North America.”

“A delay even by a year in Vancouver likely means a delay in other places.”

Boyle adds it’s unclear where the latest staff recommendation is coming from but that delaying the zero-emissions building plan flies in the face of city council’s unanimous support to act on the climate emergency.

Other recommendations in the staff report, she says, make sense and would allow the city to remove red tape on building permits without turning its back on an industry that has already invested millions of dollars to reduce emissions.

Stefan Labbé is a solutions journalist. That means he covers how people are responding to problems linked to climate change — from housing to energy and everywhere in between. Have a story idea? Get in touch. Email slabbe@glaciermedia.ca.

With files from Mike Howell

Correction: An earlier version of this story named Eric Holmes as Vancouver's city manager. That is incorrect. Paul Mochrie is the city manager. We apologize for the error.

How Vancouver is protecting itself from future flooding — with plants
May 27, 2021 8:00 AM
Comments