OMG it's a swarm of bees! "I heard them from inside my house!" "There are so many, the branch is nearly touching the ground!" "I've staked off a ribbon around them so no one accidentally walks into the swarm.
Jul 13, 2014 12:00 AM By: Betsy J. Agar 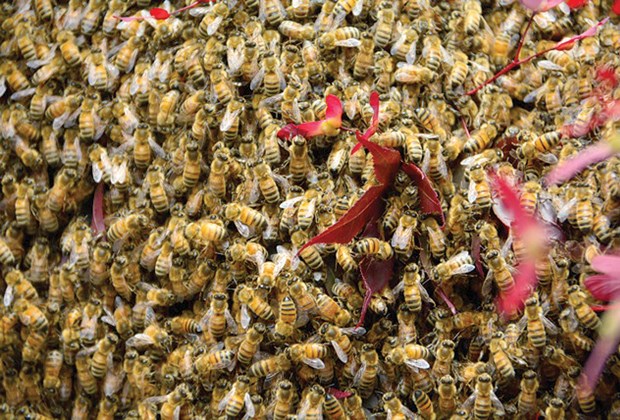 The inside of a 30,000-strong bee colony.Betsy J. Agar, North Shore News

OMG it's a swarm of bees! "I heard them from inside my house!"

"There are so many, the branch is nearly touching the ground!" "I've staked off a ribbon around them so no one accidentally walks into the swarm."

And, just like that, our street was abuzz with excitement; a hive of activity; swarming with curious onlookers.

It was late on a Sunday morning, the neighbourhood was just beginning to stir, and someone arrived at our door: "You have to come see the swarm of bees that just landed on the Japanese maple, across the street."

So, up we went, and sure enough, bees were dripping from a branch in a shape like a wasp nest: fat at the top, rounding down to a point at the bottom.

We were nervous but curious, so we snuck up to the orange ribbon a neighbour staked out to mark the lawn around them; no one dared cross it, and

clearly the bees understood they were to stay on their side too, because no one was being stung.

Our hive of onlookers grew, too, from a half dozen to two dozen, in a matter of minutes. The adults stood on the lawn across the street, the kids sat on the road. We were all lined up as though waiting for an opening act.

We were getting restless, and thoughts of "how to deal with this problem" buzzed in our heads, but no one had quite vocalized it.

"How do you know it's bees and not wasps?" one daring person broached the taboo.

"See?" one of the nineyear-olds said, holding up a specimen. "I found a dead one; they're bees."

Not wasps. Now what? Everyone knows bees are in trouble; bees are integral to food production, yet colonies are collapsing worldwide.

Before the words "spray" or "exterminate" or "kill" were uttered (you can believe they were in our thoughts) out came, "There must be someone we can call. Let's Google it!" Wouldn't you know

it, the District of North Vancouver showed up at the top of the list.

The District of North Vancouver not only supports bees, but also keeps two hives in an apiary on the roof, according to a 2012 news release. The district website also provides information on what to do about an unwanted hive: Call Sharon Lisette of the North Shore Bee Club (604-813-6772).

So, I called and naively began, "You wouldn't believe how many there are!" Sharon just laughed, "Yes, I would."

Then she took my address and promised to send her husband right away. This outfit must be pretty Mickey Mouse, I thought. She didn't even warn me to stay back, to be cautious, to get the children and people with allergies inside immediately.

Then we waited, at a safe distance, watching in fascination. Someone brought out a cooler of beer to share and everyone had their cameras out, until Ric arrived.

To his credit, he didn't laugh at our distance or the

safety perimeter we had staked out, he simply walked with his hand out as though introducing himself to a strange dog, straight into the middle of the swarm.

"They won't sting," he responded to our collective gasp. "They don't want to lose the queen's scent."

And so began the most educational Sunday of our lives, no offence to the Sunday school teachers, soccer coaches, or camp directors out there.

Ric estimated there were 30,000 bees weighing down the branch of that stoic Japanese maple, and explained their original hive had grown too big; they had to leave or it would have collapsed.

They "made" a new queen and she was searching for a new home, but queen bees are very big and not strong flyers. She was tired and needed to rest.

Then, suddenly, with an unexpected shake of the branch, Ric dropped the fledgling hive into a slatted rack, which he had propped up to shorten the fall and soften the landing for the bees that landed first.

minutes with Ric and his new bees. They buzzed around our heads. We scooped bees from the walls and lids of the box as the last of them scrambled to climb in.

We asked questions like: "How do you know the queen is in there?" "Why are some flying around still?" "Which ones are the males?" To Ric, these questions were easy.

"The first thing she did was climb as deep into that box as possible, and they immediately tried to cover her."

"The ones flying around are stirring up the pheromones so the others can find the queen."

And finally, "The males have bigger bums and moustaches."

Not until the slatted rack, heavy with eager bees, was loaded into Ric's pickup, did it occur to someone to ask where he would take them.

"There is a waiting list of keepers who have lost a hive or are expanding," he said, and a subtle sense of loss seemed to pervade the air - or it may have just been

the pheromones - as the reality of saying goodbye to "our" swarm settled in.

Ric would take them at least three kilometres away so that they would not slip into old habits and compete with their original hive, but before he left, he turned to me and asked, "You're the one who called, right?" I nodded.

"We'll bring you a complimentary jar of honey; it's a tradition."

Then he was gone, and so were our bees. Well, most of them.

"The lingerers will either die or return to the original hive," Ric explained.

I love honey, but that jar doesn't just belong to me. It belongs to every person on that street who didn't dig the Raid out of their sheds and kill off one of the world's most precious species.

Ric Erikson and Sharon Lisette are bee keepers and bee rescuers, but also bee educators. Read more about them at beefriendly.ca, and maybe also thank your local municipal office for taking an interest in bees.