SEOUL, Korea, Republic Of — South Korea’s Supreme Court on Thursday upheld a 20-year prison term for former President Park Geun-hye over bribery and other crimes as it ended a historic corruption case that marked a striking fall from grace for the co
Jan 13, 2021 11:33 PM By: Canadian Press 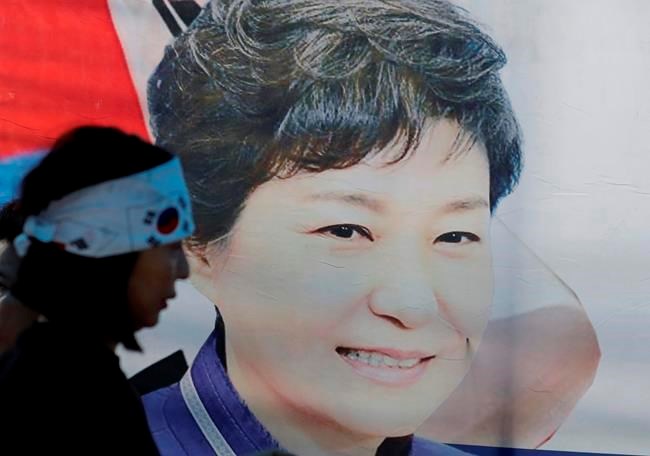 SEOUL, Korea, Republic Of — South Korea’s Supreme Court on Thursday upheld a 20-year prison term for former President Park Geun-hye over bribery and other crimes as it ended a historic corruption case that marked a striking fall from grace for the country’s first female leader and conservative icon.

The ruling means Park, who was ousted from office and arrested in 2017, could potentially serve a combined 22 years behind bars, following a separate conviction for illegally meddling in her party’s candidate nominations ahead of parliamentary elections in 2016.

But the finalizing of her prison term also makes her eligible for a special presidential pardon, a looming possibility as the country’s deeply split electorate approaches the next presidential election in March 2022.

President Moon Jae-in, a liberal who won the presidential following Park’s removal, has yet to directly address the possibility of freeing his predecessor. Moon has recently seen his approval ratings sink to new lows over economic problems, political scandals and rising coronavirus infections.

Many conservative politicians have called for Moon to release Park and another convicted former president, Lee Myung-bak, who’s serving a 17-year term over his own corruption charges. At least one prominent member of Moon’s Democratic Party, Lee Nak-yon, has endorsed the idea of pardoning the former presidents as a gesture for “national unity.”

Park, 68, has described herself a victim of political revenge. She has refused to attend her trials since October 2017 and didn’t attend Thursday’s ruling. Her lawyer didn’t return calls seeking comment.

The downfall of Park and Lee Myung-bak extended South Korea’s decades-long streak of presidencies ending badly, fueling criticism that the country places too much power that is easily abused and often goes unchecked into the hands of elected leaders.

Nearly every former president, or their family members and aides, have been mired in scandals near the end of their terms or after they left office.

One president, Park’s dictator father, Park Chung-hee, was assassinated by his spy chief in 1979. Another former president, Roh Moo-hyun, Moon’s longtime friend and political mentor, leaped to his death in 2009 amid allegations that his family members took bribes from a businessman during his presidency.

Kang Min-seok, Moon’s spokesperson, said the ruling on Park Geun-hye marked the “maturation and growth” of South Korea’s democracy but added that the imprisonment of a former president over crimes is an “unfortunate” history that shouldn’t be repeated. Presidential officials avoided specific answers when asked about the possibility of Moon pardoning Park and Lee.

Shin Young-dae, spokesperson of the Democratic Party, demanded Park to issue an apology over the “unwashable shame” she left to the country’s history.

Park was convicted of colluding with her longtime confidante, Choi Soon-sil, to take millions of dollars in bribes and extortion money from some of the country’s largest business groups, including Samsung, while she was in office from 2013 to 2016.

She was also indicted on charges of accepting illegally monthly funds from her spy chiefs that were diverted out of the agency’s budget.

Following weekslong protests by millions, Park was impeached by lawmakers in December 2016 and officially removed from office in March 2017 after the Court upheld the impeachment.

It wasn't immediately clear how Thursday’s ruling would affect the legal saga of billionaire Samsung scion Lee Jae-yong. The 52-year-old vice chairman of Samsung Electronics is facing a ruling at the Seoul High Court next week in a retrial over charges that he bribed Park and Choi to win government support for a 2015 merger between two Samsung affiliates that helped strengthen his control over the country's largest business group.

Prosecutors are seeking a nine-year prison term for Lee, who has been separately indicted on charges of stock price manipulation, breach of trust and auditing violations in relation to the merger. Lee’s lawyers have portrayed him as a victim of presidential power abuse and described the 2015 deal was part of “normal business activity.”

Park originally faced a prison term of more than 30 years before the Supreme Court sent her cases back to a lower court in 2019.

The Seoul High Court in 2018 had sentenced her to 25 years in prison after reviewing her of bribery, extortion, abuse of power and other convictions together.

But the Supreme Court in October 2019 ordered the Seoul High Court to deal with Park’s bribery charge separately from other charges, based on a law requiring so for cases involving a president or other elected officials, even when the alleged crimes are committed together.

The High Court had handed Park a five-year term over the spy fund charges in July 2019, but the Supreme Court also ordered a retrial on the case in November, instructing the lower court to more broadly apply a charge of causing losses in state funds.

If Park fully serves her sentence, she will be released in 2039 at the age of 87.