MOSCOW — Supporters of Russian opposition leader Alexei Navalny were detained Tuesday outside a penal colony east of Moscow where the Kremlin critic is currently serving time.
Apr 7, 2021 5:04 AM By: Canadian Press 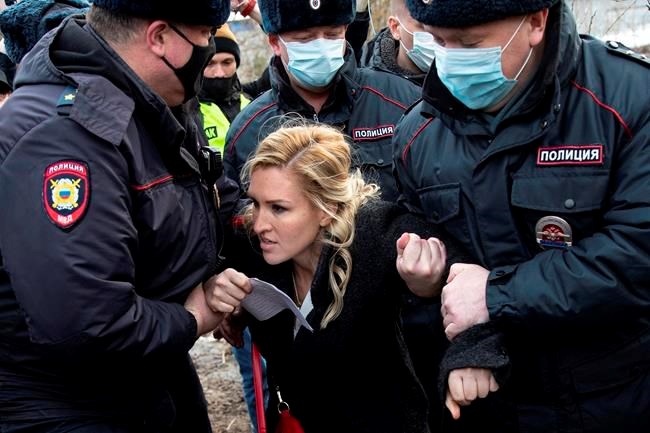 MOSCOW — Supporters of Russian opposition leader Alexei Navalny were detained Tuesday outside a penal colony east of Moscow where the Kremlin critic is currently serving time.

Navalny has been on hunger strike for nearly a week to protest what he says is the failure of authorities to provide proper medical treatment for his back and leg pains.

Doctors from the Navalny-backed Alliance of Doctors union and supporters of the politician gathered in front of the prison. Navalny's physician and the union leader Dr. Anastasia Vasilyeva tried to get inside to meet with prison officials and see Navalny or talk to the prison medics about his condition, but were turned away.

Local police said they detained nine people who allegedly “breached public order.” They included Vasilyeva and a CNN crew. Vasilyeva and the journalists were soon released, while other members of the union remained in custody.

Navalny, 44, is Russian President Vladimir Putin’s fiercest domestic opponent. He was arrested in January upon returning to Moscow from Germany, where he spent five months recovering from a nerve-agent poisoning that he blames on the Kremlin. Russian authorities have rejected the accusation.

A court ordered Navalny in February to serve 2 1/2 years in prison for violating the terms of his probation, including when he was convalescing in Germany, from a 2014 embezzlement conviction. Navalny has rejected the conviction as fabricated, and the European ?ourt of Human Rights found it “arbitrary and manifestly unreasonable.”

Authorities transferred Navalny last month from a Moscow jail to the IK-2 penal colony in the Vladimir region, 85 (53 miles) east of the Russian capital. The facility in the town of Pokrov stands out among Russian penitentiaries for its especially strict inmate routines, which include standing at attention for hours.

Within weeks of being imprisoned, Navalny said he developed severe back and leg pains and was effectively deprived of sleep because a guard checks on him hourly at night. He went on a hunger strike last Wednesday, demanding access to proper medication and a visit from his doctor.

Russia's state penitentiary service has said Navalny is receiving all the medical help he needs, but Vasilyeva and others from the Alliance of Doctors had vowed to go to the prison on Tuesday if the politician wasn't allowed a visit from a qualified independent physician by Monday night.

In an Instagram post Monday, Navalny said that three of the 15 people he is housed with were diagnosed with tuberculosis. He said he had a strong cough and a fever with a temperature of 38.1 degrees Celsius (100.6 F).

The newspaper Izvestia carried a statement from the state penitentiary service late Monday saying Navalny had been the prison's sanitary unit after a checkup found him having “signs of a respiratory illness, including a high fever.”

It was unclear Tuesday whether there had been any changes to the politician's condition.

“Of course, there can be no talk about special conditions for one of the convicted persons,” Peskov said during a conference call with reporters. “There are certain rules for inmates who get sick. If the illness truly takes place, any relevant treatment will be provided.”

Vasilyeva from the Alliance of Doctors said Tuesday she and her colleagues will keep coming to the colony. “I see only one option. If nothing happens, then we will come here tomorrow and the day after tomorrow. We will keep coming with our colleagues, requesting information and (trying to) be involved in (Navalny's) treatment somehow,” Vasilyeva said. “We can't back down. It's a matter of a person's life and death.”