Albanian man with knife wounds 5 at mosque in Tirana

TIRANA, Albania — An Albanian man with a knife attacked and wounded five people Monday at a mosque in the capital, police said, as investigators tried to determine a motive for the attack.
Apr 19, 2021 11:57 AM By: Canadian Press 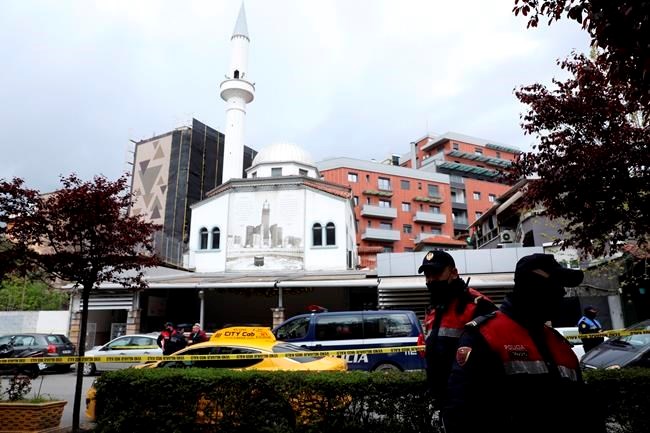 TIRANA, Albania — An Albanian man with a knife attacked and wounded five people Monday at a mosque in the capital, police said, as investigators tried to determine a motive for the attack.

Rudolf Nikolli, 34, entered the Dine Hoxha mosque in downtown Tirana about 2:30 p.m., a police statement said. Police said they reacted immediately after the attack began and took him into custody. The Top Channel private television station, however, showed civilians blocking Nikolli before the police arrived.

A police investigation has been launched into the case.

The five wounded, all men ranging from 22 to 35, were taken to a hospital and police said their conditions weren't life-threatening.

Nikolli's father, Niko, told the Balkanweb online media that his son has been depressed since last year after he wasn't allowed to leave for Italy and had also been infected with coronavirus. The alleged attacker's father is Catholic and his mother is Muslim, and the father said he told his son to go to the mosque or a church, whatever he wanted.

Ahmed Kalaja, imam of the mosque, said the man attacked worshipers and staff at a time when the mosque was filled with believers during the fasting month of Ramadan.

“We hope it was not a terrorist attack," said Kalaja.

Albania's 2.8 million people are predominantly Muslim with smaller Christian Catholic and Orthodox communities that have gotten along well with each other.

“We pray to God for all of you, who are living the month of Ramadan, for the wounded, for your community and all Albanians so that peace and goodness reign in our hearts and that such events do not occur any more,” Massafra said in a statement to the leader of Albania's Muslim community, Bujar Spahiu.

Religion in Albania was banned for 23 years under the former communist regime of Stalinist dictator Enver Hoxha, who declared Albania the world’s first atheist state, from 1967 until its fall in 1990. Religious authorities of all faiths were killed, tortured, imprisoned or sent to camps.

Pope Francis made his first visit to a Muslim-dominated country in 2014 to Albania, calling its interreligious harmony an “inspiring example” for the world.