Eating well for your health, and the planet’s

Healthy living, healthy eating and a healthy planet. As a child of the ‘60s, Donna Denison always believed in those connections. 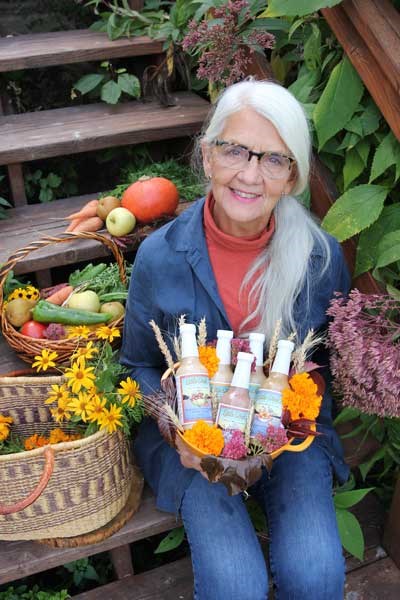 As a child of the ‘60s, Donna Denison always believed in those connections.

So naturally, it formed the philosophy of her business, Little Creek Dressing, when it began offering its line of healthy and environmentally conscious salad dressings in the mid-1990s.

“My husband Dale and I always believed in peace, love and all that good stuff,” Denison says. “It’s been our philosophy the planet has to be cared for. And we should care for ourselves, too, by eating healthy food.”

The original plan was for Dale - an orchardist, who became one of the early organic growers of greens in the Okanagan - to farm, and Denison to exercise her artistic flare as a potter.

But when they added twin daughters to a family that already included a son, the focus changed.

Wanting to be home to raise her girls, Denison decided to start her own business - bottling and selling the salad dressing she made from her own recipe.

“It was just an idea, at first. Everybody loved the dressing, so I thought I’d give it a try,” she says. “But I had no money and no support outside my own family and friends.”

Her pottery studio on the farm became a small kitchen, and the six-acre property that had been in her family since 1947 supplied the ingredients.

“We grew the garlic, basil and raspberries. And I made the vinegars,” Denison says. “My dad peeled all the garlic. My neighbours stripped the basil. Then, I’d drive it over to Peachland to get it dried, and brought it home and ground it in a blender. I squeezed all the juice from the raspberries … It was so hands-on and labour-intensive.”

It started with a call Denison made to a local health food store that already sold Dale’s organic greens, asking if she could do a demo of her dressing.

The store owner said yes, and Denison sold a case to customers, and the health food store ordered a second.

Now, 25 years later, Little Creek Dressing is run by 10 employees, including Denison, in a dedicated, modern production facility in Kelowna, while the ingredients come from organic growers from further afield.

“We simply couldn’t grow enough of the ingredients on our farm to meet demand,” says Denison, who has lately eased into retirement and has her son, Jubi, run the day-to-day operations.

And while she didn’t get a replacement pottery studio until just recently - the first burned down about a year into business - Denison hopes to put the new one to good use soon, making salad bowls so people can enjoy her dressing.

“I like to think things have come full circle,” she says.

For more information about Little Creek Dressing, visit their website at littlecreekdressing.com.