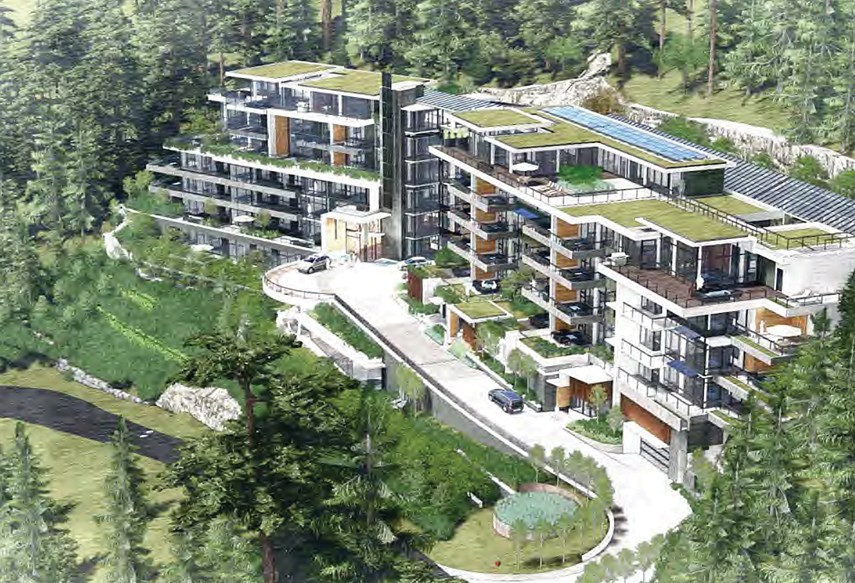 West Vancouver council unanimously approved BPP’s proposal to build a seven-storey, 39-unit strata at 37 Burfield Place, located a stone’s throw from Mulgrave School with Cypress Bowl Road looping to the south and north. Situated on steep terrain, the development is designed to be separated into two halves joined by a common hinge and contoured around rock outcroppings.

“This development meets a need in our community,” said Coun. Mary-Ann Booth.

While the finished product will likely be expensive, the development will still serve the purpose of making West Vancouver’s housing market slightly less competitive for buyers and renters, according to Booth.

“I do believe in the trickle-down theory as it applies to housing – not economically,” she added.

While she joined Booth in praising the project, Coun. Christine Cassidy nonetheless lamented the dearth of studio units in the project, which she said could provide entry-level housing or a downsizing option for seniors.

“They’re out there and living full lives until they hit the dirt, so to speak,” she said of the community’s seniors.

The project includes a single parking spot reserved for a car share.

“I’d hate to see the various strata-holders fighting over that one,” Cassidy said.

However, a BPP representative assured Cassidy that two other stalls could be used to expand car-share service at the site if the demand manifests.

The project’s merits include a rooftop solar farm as well as its proximity to Mulgrave, according to Coun. Nora Gambioli.

“Our school traffic and advisory committee will be happy to hear we may eventually have a student who walks to Mulgrave,” she said.

The development also earned plaudits from Mulgrave head of school John Wray, who called the proposal: “a tasteful element amongst the natural beauty of the area.”

The project runs the risk of becoming a car-dependent community, according to Coun. Craig Cameron.

Depending on how TransLink allots buses to the area, it might be incumbent on BPP to “step up” and provide interim traffic service, according to Cameron. Given that traffic tends to follow density, it also behooves council to move forward on their Cypress Village quickly; “not at a West Van pace,” Cameron added.

BPP has applied to build a major development which could bring between 3,851 and 7,269 residents as well as 550 jobs to a community nestled between Cypress and Cave creeks.

Citing backups in the planning department, the proposal was essentially put on the backburner in 2016. However, the development was revived when BPP and West Vancouver orchestrated an arrangement by which the developer would help pay for the planning process.

Mayor Michael Smith stressed the need for the development in 2016, suggesting BPP could create: “a real community above the highway instead of a bunch of big single-family houses.”