A developer is seeking to add more units to an already approved but not yet built tower project in the District of West Vancouver, bordering the District of North Vancouver.
Jan 18, 2020 6:00 AM By: Brent Richter 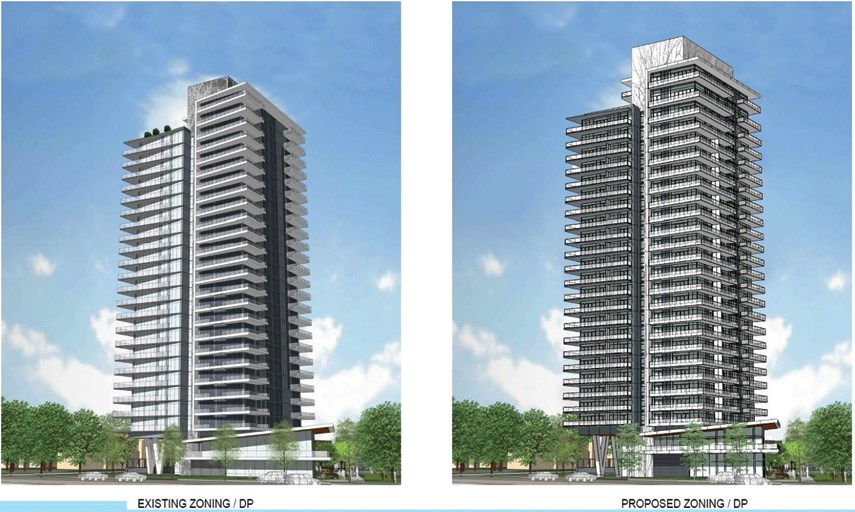 In June, 2018, Darwin Properties successfully rezoned the former Earls Tin Palace restaurant site at 303 Marine Dr. to include 141 units (93 strata and 42 market rental) in a 26-storey tower, plus six townhouses to be rented out at below-market rates for single mothers.

But in 2019, Darwin sold the project and land to Denna Homes, the same developer behind the Seylynn towers.

Now Denna says the makeup of the building has to be changed to reflect changes in the condo market and is seeking to add another 35 units within the same building footprint by making some of the larger condos into smaller ones.

The number of parking spaces would grow from 201 to 204, about 1.25 stalls per unit, which is within the district’s guidelines, according to staff.

District staff said the changes were small enough that a third-party consultant determined there would be no need for the municipality to go back and seek more community amenity contributions from Denna. But that did not sit well with Coun. Craig Cameron.

“I just don't buy that it's not worth something for the developer because there's no way the developer comes forward and spends the time and effort on your services or this uncertainty without it being financially remunerative. So, I would like to see a benefit from this,” he said. Cameron suggested that at least five or six of the proposed new units should be purpose-built rental, if council agrees to the changes at all.

Mayor Mary-Ann Booth said she was fine with asking the developer to look into making more of the units rentals, but she noted council does have a goal of approving smaller and more affordable units.

“I also don't want to cut off our nose to spite our face. I think the smaller units are more meeting our needs,” she said.

Council voted unanimously to send the latest version of the project to a public hearing scheduled for Feb. 3.

Asking for substantial changes once a rezoning had been approved was once unheard of, but this is the third time in the last year West Vancouver has considered a similar request. In July 2019, council was asked to consider adding more storeys to the new residential towers already under construction at Park Royal. That proposal remains under review and staff are targeting bringing it forward for first reading in March. In December, council agreed to British Pacific Properties’ request to add - through unit size reduction and increased building height – more than 400 strata and rental units to its long approved plans for development in the Rodgers Creek area.

This is the priciest Vancouver condo currently on the market (PHOTOS)
Jan 2, 2021 6:54 PM
Comments