The deep pockets of Canadian baby boomers are “driving and inflating” the price of recreational real estate in vacation hotspots across Canada, not least in B.C., according to the latest Re/Max Recreational Property Report.

A survey of Re/Max agents in popular recreational areas showed that retirees are driving the demand for vacation cabins in 91 per cent of the hotspots examined, and that 78 per cent of those areas are seeing price rises.

Across British Columbia, recreational properties saw an annual price increase of 19 per cent. But this varies hugely within different regions.

The median price of a waterfront cabin in Tofino, where the proposed speculation tax will not be payable, increased by a staggering 112 per cent, more than doubling from spring 2017’s $659,000 to $1.4 million in 2018 (see chart below).

However, local Re/Max agent Judy Gray was quick to point out that Tofino is such a small market, “the numbers get skewed.”

Gray said in a phone interview, “Prices are up, but not by those extremes. It’s because of a lack of high-end inventory a year ago – there was nothing to sell – but this year we’ve had some high-end waterfront inventory.”

She added, “I don’t think Tofino’s rising prices are related to being free of speculation tax, as in my experience, most buyers don’t realize that it is. Most buyers that come to us think the speculation tax is province-wide. That’s not a good thing. It’s going to hurt the provincial coffers, as [the B.C. government] won’t have the Property Transfer Tax that they like to grab onto.”

Ski cabins in Sun Peaks, which is also unaffected by B.C.’s speculation tax, saw a year-over-year increase of 34 per cent, “due to its available services and schooling attracting retirees as well as families,” according to the report.

On the flip side, in Kelowna, where B.C.’s speculation tax will apply, the median cost of a waterfront property fell by a full 25 per cent from last year’s $980,000 to $735,000 this year. But according to a local agent, this is little to do with the planned tax.

Jerry Redman, the owner of Re/Max Kelowna who supplied the local stats for the report, told Glacier Media, “It’s a misleading figure, unfortunately. The speculation tax probably played a small part in this, but that [median price] figure is mostly to do with a higher number of waterfront condos being sold versus detached houses the previous year. A lot of condo inventory that was new and sold 10 or so years ago is coming back on the market. In fact, we’ve seen higher sales figures this year, since the speculation tax was announced, which was the reverse of what we expected."

He added, “However, the speculation tax has caused angst to a lot of existing owners, who may be motivated to sell now, if it was the time to move on anyways.”

“The only dark cloud hanging over this segment of the real estate market is the proposed ‘speculation tax.’ It has introduced uncertainty to the marketplace in B.C. as people question the overall motivation of this particular government and whether this tax may broaden to more areas within the province. However, at this time, we have not witnessed any strong negative response to the tax.”

Looking ahead, the report said, “In the next two to five years, brokers in B.C. speculate the market will see a shift from retirees to younger buyers driving demand for recreational properties, as the latter accumulate more purchasing power.” 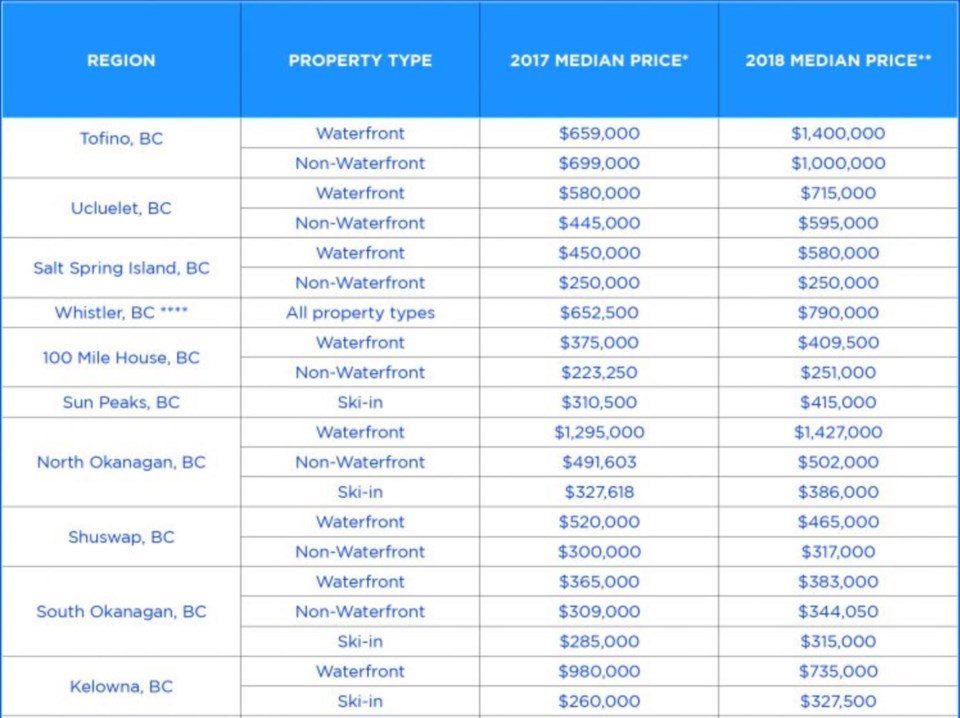