SULLIVAN: Could our traffic snarl finally turn into a smile?

I was sitting in traffic on the Upper Levels Highway the other day ... It’s a perpetual state, like the January weather forecast.
Jan 19, 2018 7:45 AM By: Paul Sullivan 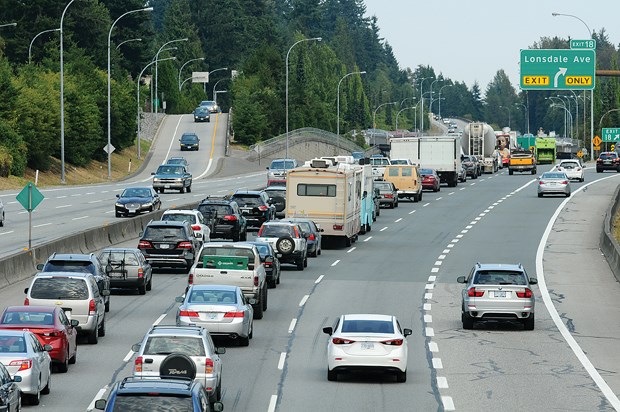 I was sitting in traffic on the Upper Levels Highway the other day ...

Anyway, it was on or about Blue Monday, the most depressing day of the year, and I was depressed about going nowhere, the gloom reinforced by the undeniable fact that I was, indeed, going nowhere. I started making up rude words out of the letters on the vanity plate on the car in front of me when a report came on the radio that changed my life.

The sun came out and larks soared through the sky singing anthems of optimism. What happened? The “Integrated North Shore Transportation Planning Project,” that’s what happened.

It may not sound like much to the civilian, but to a traffic nerd such as myself, it was the sound of music. The song goes like this: North Vancouver-Lonsdale MLA Bowinn Ma, the provincial government’s parliamentary secretary for TransLink, is going to do something about traffic on the North Shore.

Well, she’s not actually going to do something about it – that would be a lot to ask – she’s going to strike a committee to study it. (Stifled groans.)

But it’s the way she’s going to study it that makes me want to throw open the car door and go skipping into traffic for the sheer joy of it – she’s invited all the major stakeholders, including the mayors and councils of all three municipalities to work together to come up with short and long-term solutions for a problem that just keeps getting worse.

Ma put her finger right on the horn and honked it: “... there currently lacks agreement between the municipalities, TransLink, provincial government, federal government, and First Nations as to a long-term transportation plan for the North Shore.”

Yup. And in the meantime, the North Shore Auto Mall keeps pumping out SUVs like there are 28-lane freeways and the municipalities are building highrises at the entrances to bridges that have had the same number of lanes across the inlet since Leave It to Beaver.

Ma recognizes that senior levels of government don’t recognize the North Shore’s problem in the face of more pressing and coherent pressure from Vancouver or Surrey. She wants to change all that and work with all of the above to draft a plan that outlines the North Shore’s short and long-term needs.

And she wants to do it quickly, with a report finished by June 15 that can link up with the 30-year Regional Transportation Strategy refresh that TransLink is tasked with for 2018. The mayors are on board, and the three councils have either put their stamp of approval on the plan, or are inking up the stamp as we speak.

It all fits together! Harmonious flow of traffic! Co-ordinated green lights over the horizon!

Of course, I wasn’t born yesterday. (At least I don’t think so. I have a hard time remembering. Yesterday was ... ?) This is politics. The first rule of politics is make sure that everything immediately falls apart into chaotic shards of bitterness and blame. Blame North Van City; Blame North Van District; Blame West Van; Blame Bowinn Ma! Yeah, it’s her fault. She started it.

Then you have advocates. Public input into this process has yet to be clearly drawn, but the steering committee will include elected officials and they have ears to bend. The advocacy spectrum is huge and well entrenched; transit people vs. car people vs. bike people vs. pedestrians vs. NIMBYs vs. environmentalists, vs. angry old white guys who think the world started going to hell in a handbasket in 1958. Now we have bumper to bumper handbaskets. Told you so.

Whatever. Rookie MLA Ma is a brave soul who displays a willingness to tackle the Gordian snarl that is traffic on the North Shore. I’m not sure what got into her. Maybe it’s Jane Thornthwaite’s idea to run SkyTrain to Phibbs Exchange and beyond that stirs the competitive political juices. I notice that her letter to the mayor and council of West Van is dated Jan. 1, 2018. (Who sends an eight-page memo out on Jan. 1?) Maybe it’s a New Year’s resolution:

2) Fix North Shore traffic for the next 30 years.

I can make anything sound ridiculous. It’s like a super power, but fun aside, this is a solid, serious initiative that needs a sincere effort from every player who comes to the table.