PREST: What the heck is pickleball and why do I love it so much?

I can tell right now that pickleball is going to be a problem. First of all, it was invented to entertain bored children. Don’t get me wrong – I used to think entertaining bored children was a good idea. “Daddy I’m bored.
Jul 22, 2020 10:19 AM By: Andy Prest 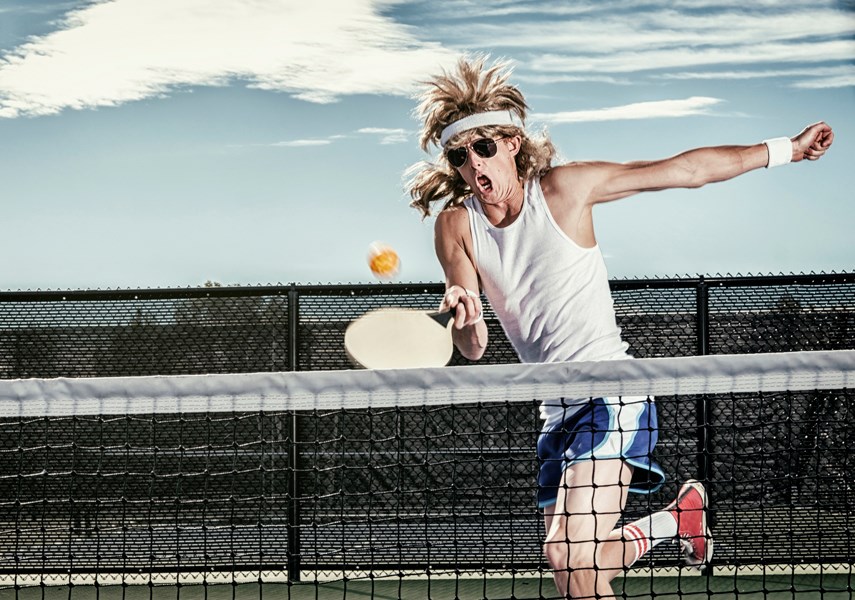 Pickleball courts are springing up across the North Shore. The sport is fun and accessible for children, seniors and everyone in between, writes columnist Andy Prest. photo Getty Images

I can tell right now that pickleball is going to be a problem.

But no. I’ve learned from all the parenting books I’ve never read but my wife explained to me that it is not a parent’s job to be a constant entertainment factory for children. A bored child isn’t a neglected child, but rather an opportunity for creativity to blossom from within. You’re not supposed to bend over backwards to entertain a bored child, my wife tells me, but rather leave them alone with their boredom or give them gentle nudges on the path towards figuring out something fun to do, like building a pillow fort in the living room, or something useful to do, like my taxes.

The bored of education, however, wasn’t there the day pickleball was invented in 1965, not that far from here on Bainbridge Island near Seattle, Wash.

Congressman Joel Pritchard and regular men William Bell and Barney McCallum were out golfing one day – so we know they were already experts on what is and isn’t boring! – when they came home to find a pack of restless children. Together they worked out a wacky game that combined aspects of three different racquet sports, lowering the nets on their badminton court and fashioning some table tennis-like wooden paddles to play a mini tennis game on a small surface with a hard plastic whiffle ball.

Presumably none of these over-stimulated children went on to do anything truly great like curing COVID-19, but the bored bunch was now blessed with a new sport that they all adored.

It even got an all-time great name. The sport was dubbed “pickleball” because Barney McCallum was the proprietor of Bainbridge Island Pickle Purveyors, the finest pickle company in the Pacific Northwest, and he had an underground cellar crammed full of gourmet pickles. The winner of every match would be given a big briny bonus prize for every victory.

OK, I made that part up, because the real story behind the name is not super fun. In fact there are two conflicting stories from the sport’s founding families, one about a dog named Pickles and one about a “pickle boat,” which is getting a bit too “you won’t believe the joke Chet down at the yacht club told me” for my liking.

Anyway, the sport took off, and these days it sometimes gets mentioned as the “fastest growing sport in North America,” a phony baloney award shared throughout my lifetime by other activities such as rollerblading, triathlon, rugby, soccer, lacrosse, stand up paddleboarding, and not football.

Pickleball, though, does seem to be gaining a strong foothold in the sporting landscape. New courts have opened up in the all three North Shore municipalities over the past year, and court time is a hot commodity. As with any new sensation, though, there are some growing pains.

Some tennis players I’ve encountered grumble about the brash newcomer horning in on their racket. And pickleball is, undoubtedly, loud.

Those wooden or composite paddles and hard balls sound out an incessant “poc poc poc” all day, every day at pickleball courts, which causes no small headache for anyone living nearby. One local court has a strict policy of ending play at 8 p.m. every night to allow for a little evening peace and quiet for the locals, and I’ve heard tell of a nearby neighbour who triumphantly emerges from their backyard on the stroke of 8 p.m. every night, wine glass in hand, to politely tell all the players to get the hell out.

Oh yes, I have no doubt we will be hearing about pickleball in our letters to the editor section for years to come.

But there is one undeniable truth: it’s super fun. I’ve dabbled in all those other racquet sports, and the moment I picked up a pickleball paddle I immediately got the sensation that this game is indeed the best mix of all of them. Hardcore tennis toughs might scoff at the dumbed-down version of their game, but one of the great things about pickleball is its accessibility – nearly anyone can hop on a court and within a few minutes have a decent grasp of the rules, and have some success at it too. The ball and paddles are built to be equalizers to slow down your Federers and Serenas a little bit. And pickleball has less running! Maybe it’s just the middle aged man in me talking, but I’m all for sports that keep you moving but cut down on the running.

My kids love it too. That’s the main reason I think the sport will grow. Young kids playing tennis always look a little weird to me, like they’re six years old and doing something they shouldn’t be doing like hammering out the details of a divorce. But six-year-olds look right at home on a pickleball court.

So yes, pickleball is going to be a problem. For me, the problem could well be all the trouble I’ll have trying to get my kids to leave the court when wine o’clock arrives and the neighbour starts yelling.