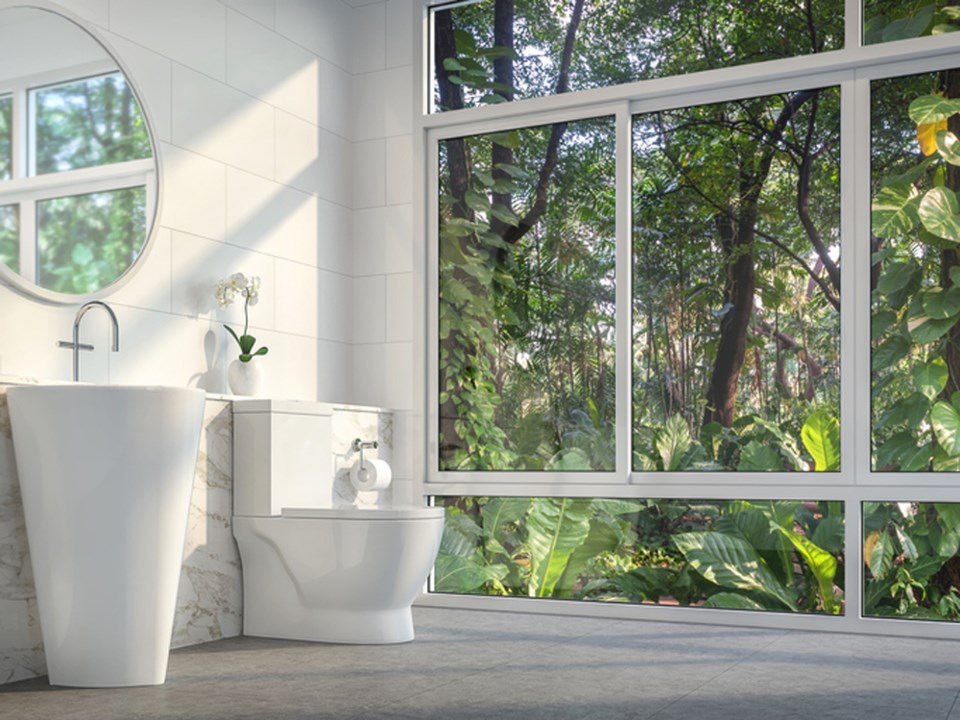 That's a lovely looking bathroom. But does this house have ... 14 more of them? North Shore News columnist Andy Prest goes digging for the toilet truth. Getty Images

You there, extravagantly wealthy person.

Might I have a word with you? It pertains to your use of ... the toilet.

Is everything OK in that area? Are there any major problems we should know about? Are you sure you’ve got quite enough of them?

I ask because a loyal reader has sent in some information that has me worried about you and your bathroom situation. She’s a recently retired university research technician who, due to COVID restrictions, has found herself with way too much time on her hands. In other words, an extremely dangerous person.

Her keen research skills have guided her to North Shore real estate listings, where she’s noted that a lot of the newer, higher-end properties for sale have a lot of bathrooms. Like, a lot. There’s a 2010 build in West Van that is 7,063 square feet in size – large, no doubt – but has 12 bathrooms. Twelve! Our keen researcher notes that if this estate housed a family of five – and LOL, do they even allow children in West Van? – that would mean one bathroom for each family member, plus the upstairs maid, the downstairs maid, the butler, the cook, the chauffer, the gardener and the pool boy.

Another listing for a more modest North Vancouver home features just four bathrooms, but this for a two-bedroom house of only 1,566 square feet. As our rogue researcher points out, that’s one bathroom for every 391 square feet. That’s a heck of an FSTPR (floor-space-to-potty ratio). Is there room for anything else? Do any of the bathrooms double as the kitchen?

The granddaddy, however, was a 12,280-square-foot “custom-built luxury mansion” in West Vancouver with eight full bathrooms plus seven bedrooms with en suite bathrooms. En suite, of course, is French for “easy pee.” Those of you sharp at math – and I assume anyone who can afford $22 million for a house has at least some rudimentary skills – will have calculated the total bathrooms for this house is 15.

What is going on here?! These houses have more plumbing than the Mario Brothers. These are wealthy folks, so they likely know a thing or two about business. But do they have problems with ... business?

Have we finally figured out where all that toilet paper was going at the start of the pandemic?

It doesn’t seem like this bathroom bonanza was always the case. This week’s North Shore News contains a story about the assessment values for the priciest properties on the North Shore, many of which are amongst the priciest properties in Canada. Topping the list is a waterfront mansion that boasts an astronomical assessment value of $27.3 million despite featuring just six bathrooms, a scandalously low number compared to other high-end houses. This house, however, was built in 1999, making it older than some of the other monster houses. Clearly the total number of commodes does not fully determine the value of an abode.

The bathroom-packed palaces would make more sense if many people were allowed to use them, but this doesn’t seem likely. What say you, bathroom hoarders? Do you share your thrones with others?

Apparently this can be a sticking point for some. Last week a Washington Post article quoted anonymous Secret Service agents saying that the outgoing Prince and Princess of the United States, Ivanka Trump and Jared Kushner, would not allow the men and women tasked with keeping them safe to use any of the six bathrooms inside of the couple’s Washington, D.C. house. The agents allegedly tried a variety of solutions to problems No. 1 and No. 2, including a porta-potty dropped on the sidewalk of the tawny neighbourhood, as well as trips to a nearby house owned by a more accommodating resident. Some guy named Barack. The ultimate answer saw the Secret Service renting out a nearby basement suite for $3,000 a month so that the agents could get some relief. Taxpayer dollars, down the drain.

Ivanka’s famous father – who as of today is officially not the president of the United States – was fairly recently offered a solid gold toilet by the Guggenheim Museum. The White House asked the museum if it could borrow a Van Gogh, and the curator came back with something she thought more appropriate for a man of his standing.

It’s a good reminder that whoever you are – whether a pool boy, secret service agent or historically awful president – we’ve all got the same toilet needs. And no matter how hard you try, you can only use one at a time.