A lasting bond was formed by an act of courage seventy years ago in North Vancouver
Mar 3, 2021 11:30 AM By: Andy Prest 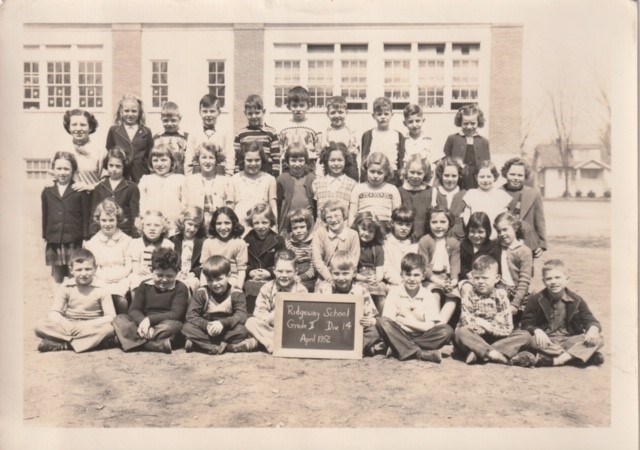 Annabelle Dick (nee MacKenzie) sits behind the sign in the second row (she has glasses on) while her great friend Valerie Jerome stands directly behind her in this class photo from 1951. The strong bond between the two girls was formed when seven-year-old Annabelle went to stand with the Jerome family as they were being threatened by other students.

Last week the North Shore News had the privilege of telling the story of record-setting sprinter Harry Jerome, coinciding with the announcement that a new track and sports facility in West Vancouver will be named in his honour.

It’s a story all North Shore residents should know – one of our own was once the world’s fastest man! – but it is also a very troubling story in a number of ways. Harry and his family were targeted with blatant racism, including reprehensible treatment right here on the North Shore.

The Jerome family moved from Winnipeg to North Vancouver in 1951, but before they even arrived, their soon-to-be neighbours presented a petition to city council, attempting to stop the family from moving onto their street because they were Black. When the Jerome siblings walked to Ridgeway Elementary on the first day of school, they were met with a mob of children who chased them home with rocks and taunts.

No doubt hearing those stories – either for the first time or revisiting a painful chapter in our history – hit home for a lot of North Shore residents. It certainly hit home for me, quite literally. I live five blocks away from where those incidents took place.

The questions that many people are likely asking themselves now, particularly with the heightened awareness of racial discrimination brought on by the Black Lives Matter movement, are “how would I react if I saw something like that happening now? What would I have done in 1951?”

I can tell you how people reacted 70 years ago. The Jerome siblings stayed home from school for several days until their father, who worked as a railroad porter, got home from a work trip. With their father leading the way, the Jerome kids attempted to go to school again, but they had to wait outside while their dad went in to talk to the principal. It was then that the mob struck again, forming a circle around the Jerome kids and again barraging them with rocks and insults. And can you guess how many students or teachers went to stand with the Jeromes?

Two. Two kids. A seven-year-old girl, Annabelle, and her older brother, Ken. Annabelle remembers it to this day.

She remembers earlier that summer when a neighbour came to the door with a petition, signed by nearly everyone else on their street, saying they didn’t want Black people living in their neighbourhood (although Annabelle remembers hearing a different descriptor than “Black people”). Annabelle’s mother Muriel MacKenzie, a North Shore nurse and single parent, refused to sign. The petition-wielding neighbour left in a huff, and then the family had a talk. Annabelle remembers her mother’s words.

“She said, ‘Never disrespect somebody because they are different. We all have the same organs in our body. … You must always do what is in your head and in your heart, and stand up for what is right.”

When the rocks started flying a few weeks later, Annabelle and Ken stood up for what they believed was right. And when she told her mother about that scary encounter, Annabelle got a little more advice.

“You must duck,” Annabelle says with a laugh, channelling her mother. “Make sure the rocks don’t hit your head or glasses, because I cannot afford to buy you another pair of glasses.”

Do you know who else remembers that encounter vividly? Valerie Jerome, Harry’s sister. Like Harry, Valerie was a lightning fast sprinter. And like Harry, she was a powerful voice advocating for education and equality.

Valerie has retired from a teaching career now but is still busy every February, speaking in schools all over the North Shore and beyond for Black History Month. And she loves to tell the story of Annabelle. She tells it every year when she goes back to Ridgeway Elementary, pointing to the very spot where she and her siblings were surrounded, and where Annabelle came and stood by her side.

“This little girl stood with us, and I have never, ever forgotten it,” says Valerie.

As the world continues to slowly come to terms with what it means to be privileged, and what barriers, seen or unseen, exist for minority groups, many people are grappling with the question of what it means to be an ally. It seems a lot can be learned from that seven-year-old girl.

Valerie Jerome thinks so at least. After I interviewed Valerie – and what a marvelous experience that was – she encouraged me to track down Annabelle, to tell this story, to show people what a little kindness can do.

“She was my first friend,” Valerie says.

They’re still great friends. Annabelle Dick (nee MacKenzie) now lives on the Sunshine Coast, but she and Valerie still see each other often (at least they did before COVID), and they still speak by phone at least a couple of times a week.

“We have a very special relationship,” says Annabelle. “We are sisters.”

That’s a bond, forged inside that circle 70 years ago, that will never be broken.