Opinion: Strait of Georgia herring fishery jeopardizes the health of the Salish Sea

'Herring are the foundation of the marine ecosystem of the Salish Sea, as they are along the entire B.C. coast’ writes local filmmaker Bob Turner
Feb 13, 2020 10:20 AM By: Bob Turner 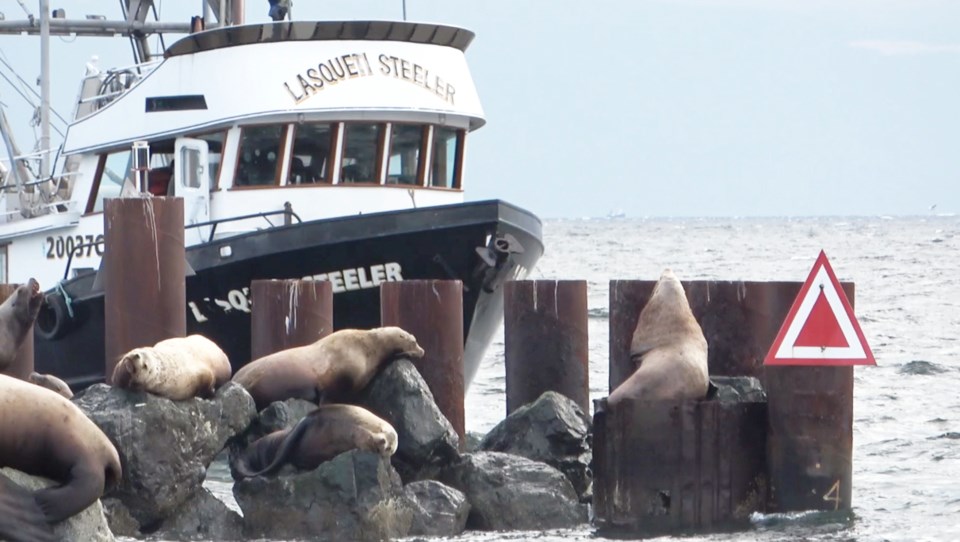 A fishing boat of the herring fleet entering the French Creek harbour mouth lined with sea lions, also there for the herring, during the 2019 herring fishery and herring spawn.Bob Turner

Last March, I went to Hornby Island to attend the annual HerringFest, a celebration of the herring spawn that occurs along that island’s shores. This Strait of Georgia herring spawn, the largest on the west coast of North America, typically stretches each year along Vancouver Island shores and nearby islands from Nanaimo north to Comox. Sea lions, sea birds, and whales from around the Salish Sea converge to feed on the herring and their eggs alike, creating a great spectacle of nature. Amid all this wildlife is the commercial herring fishery, with dozens and dozens of gillnetters and seiners harvesting about 20 per cent of the returning herring. It is a highly controversial fishery, opposed by many groups, including the Bowen Island Conservancy.

I went to record both the spawn and the fishery on video, and have since posted two movies on my YouTube channel (search Bob Turner, Howe Sound)––one about kayaking amid the chaos of a spawn, and the other, at a harbour on Vancouver Island, watching fish boats return with their herring catch. Both the experience and my conversations since have taught me many things.

Foremost, herring are the foundation of the marine ecosystem of the Salish Sea, as they are along the entire B.C. coast. Herring feed on abundant plankton and convert into their oily flesh a rocket fuel that feeds salmon, halibut, hake, humpback whales, dolphins, seals and sea lions. And that makes herring the keystone species for so much of our coastal economy––the commercial halibut, hake and salmon fisheries, the sport salmon fishery, and the whale watching industry, collectively worth over half a billion dollars annually. Orcas too, depend on herring, as both resident and Bigg’s killer whales feed respectively on Chinook salmon and seals, which in turn, hunt herring.

Here in Alt’ka7tsem/Howe Sound, we know the importance of herring. For 30 years, our local herring stocks were depressed by industrial pollution and overfishing, and, as a consequence, few marine mammals other than seals visited the Sound. But in the early 2000s, after the pollution was abated, a local herring stocks rebuilt. We have witnessed what followed––the return of whales, sea lions and other marine life that some have called the Great Howe Sound Recovery.

But the herring fishery puts much of that at risk. Industrial scale fishing started in the early 1900s along the B.C. coast and by the 1960s, herring stocks collapsed and the fishery closed. After a few years stocks rebounded, and the commercial fishery continued, primarily for herring eggs, or roe as it is called. The eggs are shipped to Asia as a delicacy food. But the herring stocks continued to be overfished and today, four of the five herring districts along the B.C. coast managed by Fisheries and Oceans Canada are closed due to depressed stocks.

Today, only the Strait of Georgia herring fishery remains open. However, these stocks too are down, now for the fourth year in a row. In 2019, DFO scientists advised the minister that the best way to mitigate the risk of stock collapse was to reduce the catch from 20 per cent to 10 per cent. The minister chose to not take that advice and announced the fishery would proceed in 2020, business as usual.

Opposition to this fishery is widespread: 53 communities on Vancouver Island, several First Nations, Islands Trust and many conservation groups. A letter signed by dozens of conservation groups and businesses, including the Bowen Island Conservancy, has called on the minister to suspend the Salish Sea herring fishery.

MP Gord Johns (Courtenay-Alberni) has gathered more than 2,700 signatures against the fishery. Please consider signing that petition––just search the internet for “House of Commons Petition 2342.

I, along with many others, find the commercial herring fishery stunningly wasteful and harmful. Herring, unlike salmon, can spawn seven or eight times. First Nations have practiced for millennia a sustainable roe-on-kelp fisheries that harvests just the eggs, not the fish. However the commercial fishery limits this potential of multiple spawns by killing the fish.

Also problematic is that only the eggs of mature females is food for humans, shipped overseas to Asia as a delicacy food. The rest of the herring, equivalent by weight to nine out of 10 herring, are ground into fish meal for farmed fish or garden fertilizer. Such a “reduction” fishery is illegal in Canada, but the herring fishery has a ministerial exemption because of the value of the eggs.

And there is further damage. Young herring depend on older fish to lead them to spawning areas. However, the herring fishery has, over the years, caught most of the older fish. Many experts believe that this explains the tremendous loss of herring spawn areas along the B.C. coast. Snug Cove once had herring spawn.

And yet, the commercial herring fishery is barely profitable. Over the past 30 years, the price for roe has dropped to a small fraction of its former value. The landed value of the herring fishery in 2016 was $16 million, yet this small fishery is allowed to jeopardize the collective health of the commercial salmon, halibut, and hake fisheries, the sport salmon fishery, and the whale watching industry, together worth well over half a billion dollars annually.

That a small fishery is allowed to damage not only the entire ecology of the Salish Sea but also the entire coastal economy seems hard for me to understand. And well worth protesting.