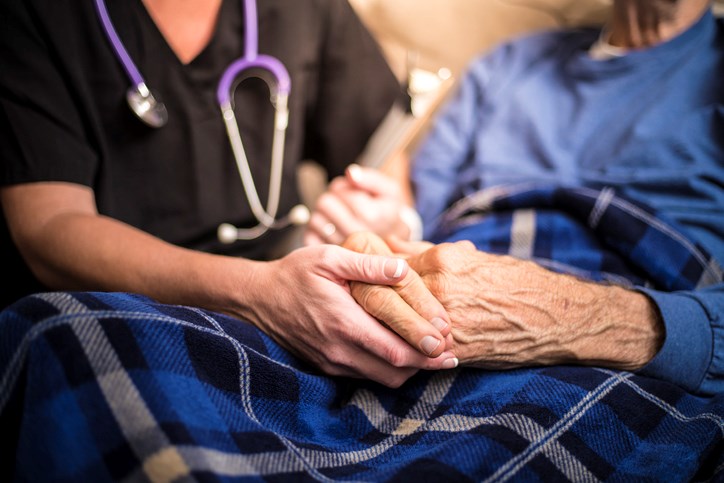 The pandemic has intensified concerns about people with dementia being unjustly detained, arrested and charged.Getty Images
Last summer, as Karen Garner walked home along a roadside path picking wildflowers, an officer pulled up and asked her to stop. Appearing confused, the 73-year-old woman with dementia turned to continue walking. The officer immediately grabbed her arms, twisting them and handcuffing her in the dirt. A second cop arrived; the two officers forced down the 80-pound woman and hogtied her.

Minutes before the attack, Garner had left a Colorado Walmart without paying for $14 worth of merchandise. Employees followed her outside, took the items back and called police.

During the violent arrest, which was captured by a police body camera, Garner suffered a dislocated shoulder and broken arm, among other injuries.

Garner’s distressing experience is not isolated; her case is part of a worrying string of police and prosecutorial behaviours that criminalize dementia-induced symptoms like forgetfulness. These symptoms can lead to wrongdoings like shoplifting, public urination and assault. Rare cases involve extreme violence.

Mercifully, most people with dementia will not encounter law enforcement and most interactions are resolved successfully; however, some result in negative outcomes.

The undignified, degrading and violent treatment of suspects with dementia is not just an American problem. In Canada, as the number of people with the disease increases, a corresponding rise in police interactions with this population is projected. The risk is acute because under-resourced aging-in-place policies often leave patients and their families on their own, with inadequate home care and few respite beds.

The pandemic intensified concerns about people with dementia being unjustly detained, arrested and charged. For some, dementia symptoms like agitation worsened during lockdowns. With day programs and senior centres closed, people with dementia have lacked access to facilities that are better equipped to provide compassionate environments.

As COVID-19 restrictions loosen, the fear of re-entering society may put people with dementia at particular risk of police abuse, as anxiety can make symptoms worse.

In 2011, the United Nations General Assembly designated June 15 as World Elder Abuse Awareness Day. “It represents the one day in the year when the whole world voices its opposition to the abuse and suffering inflicted to some of our older generations,” says the UN.

The World Health Organization defines elder abuse as a single or repeated act or omission that causes harm to an older person and occurs in a relationship where there is an expectation of trust.

In dementia advocacy, police are often rightly viewed through a crime prevention and investigative lens, there to stop and catch abusers. Officers are also key partners in ensuring the safety and wellbeing of people with dementia who are experiencing distressing symptoms in the community. In July 2020, for example, North Vancouver RCMP responded to a call from a woman whose husband with dementia was agitated after being stuck at home for three days. Officers calmed the man down and then went on a walk with him.

But law enforcement can also be part of the problem. Police hold a unique position of trust, especially when dealing with vulnerable seniors. If they violate this authority, through forceful arrest or other mistreatment, they can become the perpetrators of elder abuse.

“I fully support the charges brought against these two individuals regarding their interactions with Ms. Garner,” said the local police chief. He also announced that most of the department had now received dementia education and would be taking additional de-escalation training.

Training can make a difference. But it takes money.

While calls to defund police raise worthy concerns, they clash with efforts aimed at enhancing police de-escalation capacity in dementia-related situations. Under police budget cuts, the ageism that permeates every aspect of society means that elder abuse and dementia programs would likely be among the first to be eliminated.

Across Canada, there is a scattering of training designed to help police recognize cognitive impairment and intervene with compassion. Officers have shown their willingness to learn, but to reach everyone on the frontlines, these initiatives need greater funding and support from governments and other investors.

Responding to dementia-related behaviours can be complex, especially if the person is physically strong and threatening violence. While it might not be possible to avoid all injury, increased police training holds promise to achieve a society in which harm is minimized and suspects with dementia are treated with dignity.

Heather Campbell Pope is a former B.C. lawyer and founder of Dementia Justice Canada, an organization dedicated to improving the lives of people with dementia who enter the criminal justice system.

Letter: Old-growth is essential to our supernatural British Columbia
Jun 11, 2021 8:29 AM
Comments