MOVE ON: What if we paid people to cycle instead of drive?

Creative fixes needed to keep congestion from roaring back onto our roads after COVID-19
May 6, 2020 6:50 PM By: Heather Drugge 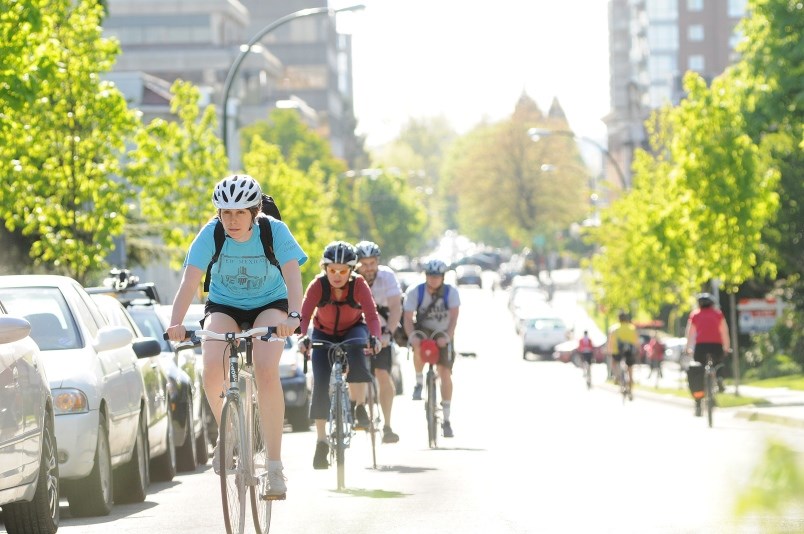 Many studies show that in the long run, the health benefits of cycling and attendant reductions in healthcare far outweigh the costs of creating new infrastructure. file photo Dan Toulgoet/Vancouver Courier

Behind the sweet chickadee bird notes in my backyard, I detect the faint scrabble of congestion organizing to rumble back.

I am worried. A quote from July last year reminds me of just how radically altered our transportation landscape has become.

It’s understandable. Who wants to be confined with a bunch of potentially virus riddled strangers? If you have a car, that’s probably what you are using. Because so many people are either working from home or not working at all, driving seems fine for now. But then what?

Cities around the world are bracing for a resurgence in car dependency. According to one Abottsford car dealer, cheap wheels are selling fast. San Francisco transportation planners are predicting complete gridlock unless people can be attracted back to transit.

This is more than just a problem for transit organizations. The problem is that with gridlock comes massive productivity drops. Sitting in traffic is not just personally unproductive. Traffic literally stalls the economy. If goods and services sit in transport only as we emerge from what will undoubtedly be one of the most significant recessions in modern times, how will that impact our economy? If we all pile into single-occupancy cars, congestion could stall the economy, just when it needs a jumpstart. We should prepare to take measures that keep goods and services flowing as smoothly as possible.

What are our options?

The usual response to undersupply and overdemand would be to ration the scarce resource, like when you go to the grocery store and can only buy two packages of frozen vegetables. Transit is a form of road rationing.

On the North Shore, before the virus and R2, our roads were jammed. R2 was a logical way to get people out of personal vehicles. More people can move using a smaller portion of the roadway. Now, though, unless transit can rebuild ridership, maybe we will need to limit the number of car trips a person can take. Or we price the resource as a disincentive. We could issue road use permits or just plain toll roads. Politicians on the North Shore will love these solutions. Not.

Here’s another idea from my lunatic fringe. We could pay people to cycle instead of drive. Yes, pay them. The road density use for cycling is not as high as with transit, but definitely higher than cars. Arbitrarily, say we gave people $300 a month to ride, how would that impact traffic?

Many studies show that in the long run, the health benefits of cycling and attendant reductions in healthcare far outweigh the costs of creating new infrastructure. I am not even suggesting we build new infrastructure. Just send money to people who ride. Tracking is not impossible now with GPS-enabled phones and an app. The app could tell what mode people use by their speed. Registered people who ride could get a cheque on a sliding scale. More miles riding equals more pay – up to a maximum.

OK, there are some bugs to work out … like people just riding around for no reason other than to collect their money. Even then, it might be worth it for the cost savings to our healthcare system. Not to mention the cost contribution to climate change and other environmental benefits like clean air and less noise pollution.

I like hearing the chickadees. Whatever lunatic fringe you inhabit, let’s start thinking now about ways to keep North Shore congestion at bay before it comes roaring back.

Heather Drugge is a sustainable transportation advocate who has used her bike for transportation for 20 years. She’s looking at getting an e-bike and maybe a jetpack next. Northshoremoves@gmail.com.