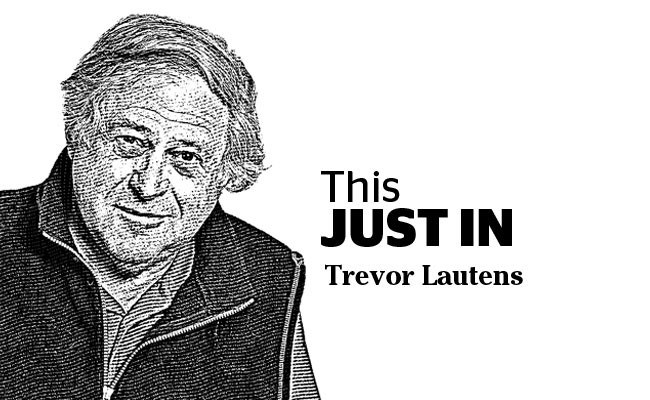 West Vancouverites allegedly inhabit an enviable enclave of privilege. Wrong. There’s a hole in our lives. Many holes

They can be seen, and all too late shockingly felt, at the entrance to West Van’s signature attraction – last Sunday paralyzed by sun-starved swarms of people – Lighthouse Park.

They’re increasingly rivalled by the holes at Cypress municipal park.

Potholes. Yes, potholes, an unglamorous topic for a column, for a society stupidly more fixated on pot than on the homely pothole.

Our language has been decayed by the media’s trotting out of over-exercised words like scandal. I’ll take it around the block once more and apologize later after it’s cooled down.

Town hall – politicians and the staff that gobble 80 per cent of the budget – deserve a whipping for years of scandalous neglect and half-hearted patching of park potholes that ambush the unwary visitor and insult the suspension of vehicles driven even by savvy locals.

No speed is slow enough. The other day an athletic worm could have breezed past a car whose creeping encounter with a water-filled pothole pitched a small dog from the passenger seat to the floor.

Why is this tolerated? What elusive, mysterious technology has to be discovered by West Van engineers and road people to fix it? What mighty act of political will has to drive it?

It’s not just park potholes, of course. West Vancouver is the richest suburb of a city with world-class real estate prices. It doesn’t look, feel or act like it. A dusty prairie tank town shows more pride.

The flesh crawls that a scene of mass death at a previously obscure place in France called Vimy Ridge can strike up the band and skirl the bagpipes a century later as the cradle of a modern, independent Canada.

The cradle. A cradle of graves.

Canada’s victory at Vimy won praise and political points. But a generation of youth sacrificed on the altar of mad European states’ ambitions now looks like appalling folly.

Recently, thumbing through my copy of J.B. Priestley’s memoirs, vivid on his war service, I read: “That dugout we have all seen in productions of Journey’s End would have looked to me then like a suite in some Grand Hotel; I never did find myself within miles of anything so dry and commodious.”

Follow-up to CN Rail’s claim for rent from West Vancouver – unpaid since 1994 – for use of its land in the Seawalk area:

Rent negotiations went on until 1999, then fell silent. So CN’s restarting of the issue last September – demanding $3.7 million rent – came completely out of the blue (or the red?) for current Mayor Michael Smith and council. The players at the turn of this century have long left the town hall scene.

Our rich language is a mere panhandler to describe Max Wyman’s accomplishments – his term as mayor of Lions Bay (2005-2008) surely the one startlingly beyond prediction from his previous lives. Dance, music, all-purpose arts critic. Broadcaster. Culture industry mandarin. Biographer of ballerina Evelyn Hart and of jeweler Tony Cavelti. Authentic wit, scholar and gentleman. And patron of West Vancouver’s Caulfeild Safeway, passing graciously among the common folk and the vegetables

Max and wife and retired critic Susan Mertens have had a spot of bother with their health – Susan had a bad cliffside fall last year – but the recent grand news is that Max will be the first recipient of the Max Wyman Award for Cultural Commentary. Philanthropist Yosef Wosk, with his own vast panoply of accomplishment, will launch the award next Tuesday at the Playhouse. Standing ovation certain for this unique ex-mayor.

My favourite cartoonist picturing animals as people, anthropomorphism, as the quality people call it? Easy. That would be Carl Barks. Notwithstanding his name, his strips didn’t depict barking dogs but quacking ducks – Donald, his three mischievous nephews, and fabulously rich old crank Scrooge McDuck.

Barks created the timeless Donald Duck stories in Walt Disney’s Comics, uncredited by not-so-genial Walt, who, most people assumed, did all the Disney stuff himself. I have 100-odd priceless Disney original comics back to 1943, hidden from five sticky-fingered children (they still don’t know).

Marmaduke, an amazingly long-running strip (1954-2015) featuring a Great Dane, outlived its creator and finally drew bored critics’ ire. But the strip amused me.

So, a fairly tough house as they say in theatre, I picked up, warily, Adrian Raeside’s Tails Don’t Lie 2: A Pack of Dog Cartoons (Harbour Publishing, released April 1).

Anthropomorphizing dogs can be too cutesy by a stretch. But Raeside’s book guaranteed at least one broad smile per three-panel page, and much admiration for his untiring ingenuity.

Why this long oversight? For at least 55 years I’ve marked the anniversary of the death of Oscar Wilde (Nov. 30, 1900) by raising a single perfect glass of sherry to his memory.

But what of his wife, Constance?

She was the naïve, deeper victim of the Wilde crack-up. Photos, especially one hugging son Cyril, show a beautiful woman with wrenching sadness in her eyes.

Most Canadians not ready to expand drug legalization beyond cannabis: poll
Apr 19, 2021 6:00 AM
Comments