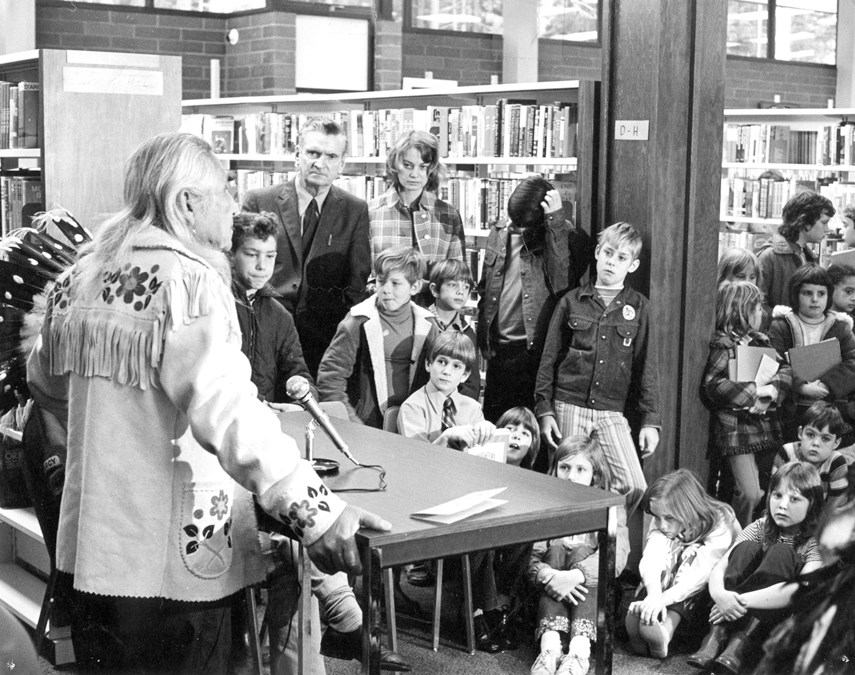 Chief Dan George was a leader of the Tsleil-Waututh Nation as well as a beloved actor, musician, poet and author. He was born in North Vancouver in 1899 and died in 1981.

The following column, reprinted in its entirety, appeared in the North Shore Free Press – an early iteration of the North Shore News – on March 1, 1972. Though these words were written nearly 50 years ago, they still resonate today as Canada ventures into a new age of truth and reconciliation while also grappling with a global climate emergency.

I am a native North American. In the course of my life I have lived in two distinct cultures.

I was born into a culture that lived in communal houses. My grandfather’s house was 80 feet long; it was called a smoke house and it stood down by a beach along the inlet. All my grandfather’s sons and their families lived in this large dwelling. Their sleeping apartments were separated by blankets made of bulrush reeds. But one open fire in the middle served the cooking needs for all. In houses like these, throughout our tribe, people learned to live with one another; they learned to serve one another and they learned to respect the rights of one another. Our children shared the thoughts of the adult world and found themselves surrounded by aunts and uncles and cousins who loved them. My father was born in such a house and learned from infancy how to love people and be at home with them.

And beyond this acceptance of one another there was a deep respect for everything in nature that surrounded them. My father really loved the earth and all its creatures. The earth was his second mother. The earth and everything it contained was a gift from See-see-am … and the way to thank this great spirit was to use his gifts with respect.

I remember, as a little boy, fishing with him up Indian Arm and I can still see him as the sun rose above the mountain top in the morning … I can see him standing by the water’s edge with his arms raised above his head while he softly cried …

“Thank You. Thank You.” It left a deep impression on my young mind. And I shall never forget his disappointment when once he caught me gaffing for fish “just for the fun of it.”

“My son,” he said. “the Great Spirit gave you those fish to be your brothers, to feed you when you are hungry. You must respect them. You must not kill them just for the fun of it.” This, then, was the culture I was born into and for some years the only one I really knew or tasted. This is why I find it hard to accept many of the new things I see around me.

I see people living in smoke houses hundreds of times bigger than the one I knew, but these people in one apartment do not even know the people in the next and care less about them.

It is hard for me to understand how men not only hate and fight their brothers, but even attack nature and abuse her. I see my white brother going about blotting out nature from his cities … I see him strip the hills bare, leaving ugly wounds on the face of mountains. I see him tearing things from the bosom of mother earth as though she were a monster who refused to share her treasures with him. I see him throw poisons in her waters, indifferent to the life he kills, and he chokes the air with deadly fumes.

I know that my white brother does many things well, but I wonder if he has ever really learned how to love. Perhaps he loves the things that are his own but has never learned to love the things outside and beyond him. This is not love at all! For man must love all creation or he will love none of it. It is the power of love that makes him the greatest of them all … for he alone of all animals is capable of love.

My friends, how desperately do we need to be loved and to love. When Christ said that man does not live by bread alone, He spoke of a hunger. This hunger was not the hunger of the body … it was not the hunger for bread. He spoke of a hunger that begins in the very depths of man … a hunger for love. Love is something you and I must have. We must have it because our spirit feeds upon it. We must have it because without it we become weak. Without love our self esteem weakens. Without it our courage fails. Without love we can no longer look out confidently at the world … Instead we turn inwardly and begin to feed upon our own personalities and little by little we destroy ourselves.

You and I need the strength and joy that comes from knowing that we are loved. With it we are creative. With it we march tirelessly. With it, and it alone, we are able to sacrifice for others. There have been many times when we all wanted so desperately to feel a reassuring hand upon us … there have been lonely times when we wanted a strong arm around us … I cannot tell you how deeply I miss my wife’s presence when I return home from a trip. Her love was my greatest joy, my strength, my greatest blessing.

I am afraid my culture has little to offer yours. But my culture did praise friendship and companionship. It did not look on privacy as a thing to be clung to, for privacy builds up walls and walls promote distrust.

My culture lived in big family communities, and from infancy people learned to live with others.

My culture did not prize the hoarding of private possessions; in fact, to hoard was a shameful thing among my people. The Indian looked on all things in nature as belonging to him and he expected to share them with others and to take only what he needed.

Everyone likes to give as well as receive. No one wishes only to receive all the time. We have taken much from your culture; I wish you had taken something from ours, for there are some beautiful and good things in it. Soon it will be too late to know my culture, for integration is upon us and soon we will have no values but yours. Already so many of our young people have forgotten the old ways. And many have been ashamed of their Indian ways by scorn and derision. My culture is like a wounded stag that has crawled away into the forest to bleed and die alone.

The only thing that can truly help us is genuine love. You must truly love us, be patient with us and share with us. And we must love you with a genuine love that forgives and forgets ... a love that forgives the terrible sufferings your culture brought ours when it swept over us like a wave crashing along a beach … with a love that forgets and lifts up its head and sees in your eyes an answering look of trust and understanding. ◆

This story was included in our 50th Anniversary Issue, published Wednesday, Aug. 14, 2019. Click here for more stories from this special edition of the North Shore News.