Elevated to Toronto FC's first team, young striker Jordan Perruzza is still a little star-struck. Especially when it comes to captain Michael Bradley. The admiration is sparked by more than Bradley's distinguished playing record.
Apr 5, 2021 10:32 AM By: Canadian Press 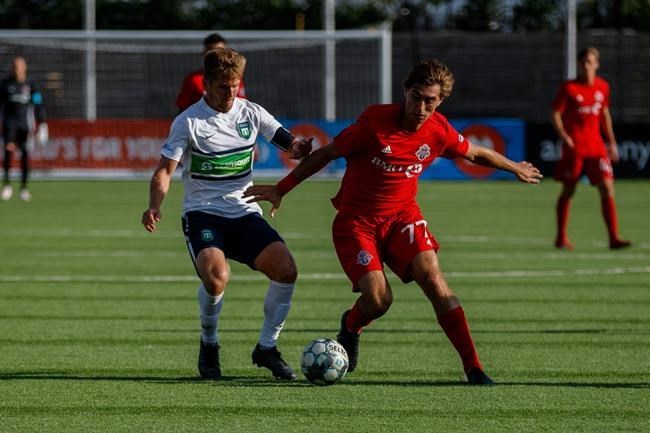 The admiration is sparked by more than Bradley's distinguished playing record.

"So every morning, I walk down the stairs and I see Michael at breakfast and it's just surreal," Perruzza said from TFC's training base in Orlando. "It's crazy to see that.

"He comes over and talks to me and tells me I've had a good (training) session. And it's just like 'You played with my idol.'"

The conversation sometimes slips into Italian. Perruzza, whose father is originally from Italy, is fluent and Bradley picked up the language during his time in Italy prior to returning to Toronto in January 2014.

Perruzza has already made a good impression in camp, scoring in Toronto's 4-2 win over he defending champion Columbus Crew SC in a pre-season friendly last Thursday at the ESPN Wide World of Sport Complex.

New coach Chris Armas likes what he sees in Perruzza, especially his attitude.

"It's nice to see every day Pat Mullins and Jozy (Altidore) mentoring him. And Jordan's open to it," said Armas.

"He's a very confident player. He believes he can score. He believes he should be out there. And (No.) 9s, true strikers, think like that. So he has shown that … It's a relatively small sample size but he's making some noise up there. He's off to a good start."

Toronto has plenty of emerging forward talent with 20-year-old Ayo Akinola and 23-year-old Ifunanyachi Achara, although both are working their way back from medical issues. Perruzza offers another young option.

This is the third TFC training camp Perruzza has attended but his first under contract to the first team.

"This one's a lot more special to me," he said. "I just feel more part of the team this time. I'm getting used a lot more in training. It's just very, very fun. I'm having a good time."

Perruzza, a former Canadian under-20 player, has put in a lot of hard work to get there.

He played locally for clubs in Woodbridge and Vaughan before joining the TFC academy in December 2012. He moved to Italy in 2014 to be part of Empoli's youth setup, earning an invitation to try out after a positive scouting report.

Within days, the club was working on getting him an Italian passport.

"It happened so fast. It was just four days of training and I was back home on a flight. And (Empoli) said 'We'll see you in the summer.'"

He returned to Canada four years later and signed first with Toronto FC 2 in December 2018 and then last August with the first team in a deal that kicked in Jan. 1. He became the 24th player in club history to sign for the first team from the TFC academy.

With TFC 2 out of action during the pandemic in 2020, Perruzza was loaned to USL Championship side San Antonio FC last September.

"it was confusing year for everyone in the entire world," he said. "I was planning to have another great season with TFC 2 and then COVID hit."

"Right when I got there I was welcomed with open arms," he recalled. "Alen gave me a lot of confidence just to be myself, just play with freedom."

Perruzza was 14 when he moved to Italy. His mother spent the first year with him because he wasn't old enough to live in Empoli's residency. At 15, he moved into the team quarters with 20 teammates.

"It was tough but at the same time it matured me a lot," he said.

At first, he had no Italian. It took him about a year to get comfortable speaking, which eased the transition.

He spent four years there, with his game steadily improving. Back in Toronto, he made his TFC 2 debut at 17.

"I didn't have a contact at the time and there was a lot of pressure on me to perform. I did, thankfully," he said

Perruzza scored 17 goals and added two assists in 28 appearances for TFC 2. he led the club in 2019 with 15 goals, good for second in USL League One.

The six-foot-one 182-pounder describes himself as a striker who loves the ball at his feet and likes to create space to do damage. He wears No. 77, the number assigned to hum during his TFC 2 tenure.

"It's been working, so I think it looks good," he said.

Toronto opens its Scotiabank CONCACAF Champions League round-of-16 tie in Mexico against Club Leon on Wednesday with the return leg April 24 in the Orlando area. TFC kicks off the MLS regular season April 17 against CF Montreal in Fort Lauderdale.

This report by The Canadian Press was first published April 5, 2021