VANCOUVER — Less than a week into the NHL's pandemic-condensed regular season, a sense of urgency is already swirling around the Vancouver Canucks.
Jan 19, 2021 2:26 PM By: Canadian Press 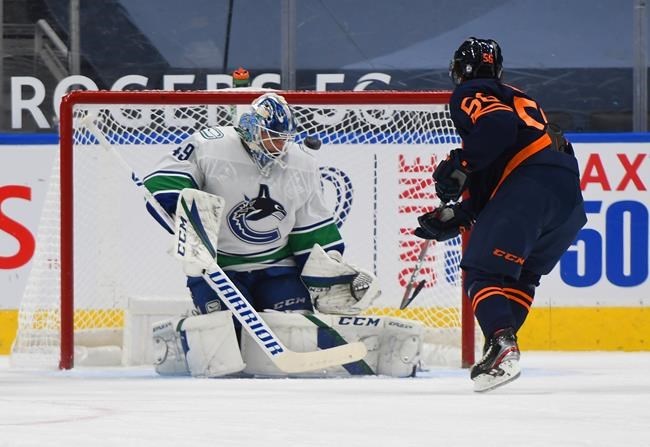 VANCOUVER — Less than a week into the NHL's pandemic-condensed regular season, a sense of urgency is already swirling around the Vancouver Canucks.

A disappointing swing through Alberta left the squad with a 1-3-0 record as key players struggled to perform and special teams faltered.

“Even in an 82-game season you don’t want to start this way, let alone in a 56-(game season)," Canucks left-winger Tanner Pearson said on a video call Tuesday.

"You really gotta think about turning things around quicker than dipping your toes in the water and letting things play out. You’ve got to chomp at the bit. Right away, we’ve got to turn the boat around.”

What awaits the team back in Vancouver isn't any easier — the Canucks are set to host the Montreal Canadiens (2-0-1) in a three-game series this week. Wednesday's game is Vancouver's home opener.

The Habs' rejigged roster — including right-winger Josh Anderson, defenceman Joel Edmundson and former Canuck Tyler Toffoli — has been clicking early. The team comes to the West Coast on a high, having swept two games against the Oilers in Edmonton after an overtime loss in Toronto to open the season.

“Everyone knows (the Canadiens) got better in the off-season," said Canucks coach Travis Green. "They’re a deep team throughout their lineup, they’ve got a lot of speed in their lineup. And they’ve got off to a good start.”

Against a deep team like the Habs, there'll be an even greater emphasis on each line playing well, the coach said.

Where Montreal has excelled to start the season, Vancouver has laboured.

The Canadiens' effective penalty kill kept the Oilers from scoring on all 10 power-play chances across a two-game series. The Canucks have allowed seven goals on 21 penalties in their first four games.

Montreal has the fourth-best power play in the league, capitalizing on 40 per cent of its chances with the man advantage. Vancouver is one of eight teams that has yet to score on the power play, despite getting 15 opportunities so far.

"You can’t have half your team playing the way they should and half your team not. We need everyone to play better. And certain players need to raise their game, they know that. And I’m confident they will.”

One Vancouver star looking to improve is Elias Pettersson. After raking in 66 points (27 goals, 39 assists) in his sophomore campaign last season, the 22-year-old Swedish centre has been limited to a single assist this year.

“I think I can do a lot of better stuff out there. I think I’m maybe not playing with the best confidence right now," he said Monday night after the Canucks dropped a 5-2 decision to the Flames in Calgary.

Pettersson's frustration was evident in the loss as he took two uncharacteristic penalties, including a slash on Sean Monahan that resulted in a US$3,987.07 fine from the league.

He sat in the box with his head hung low.

“It’s very frustrating now," Pettersson said. “When we’re not playing our best hockey, we can’t sink that low. We’ve got to find a way to get back to our game and not just let them roll over us.”

There have been flashes of positivity for the Canucks.

Vancouver started the season with a dominant 5-3 victory over the Oilers on Jan. 13, and put in a solid performance in the first period of Monday's loss. The Canucks held a 1-0 lead going into the first intermission.

Green wants to see his group play that style of game for a full 60 minutes.

“Individually, we need to have probably some better efforts out of some players. That’ll help," he said. "Our special teams haven’t been great. That’s going to help. And we’ve got to stay out of the box. And that’s going to help.”

This report by The Canadian Press was first published Jan. 19, 2021.