Toronto Arrows, Rugby ATL put friendship aside for the day as they meet again

Sharing training facilities in Marietta, Ga., it's not unusual for players from Rugby ATL and the Toronto Arrows to cross each others' path.
May 7, 2021 11:24 AM By: Canadian Press 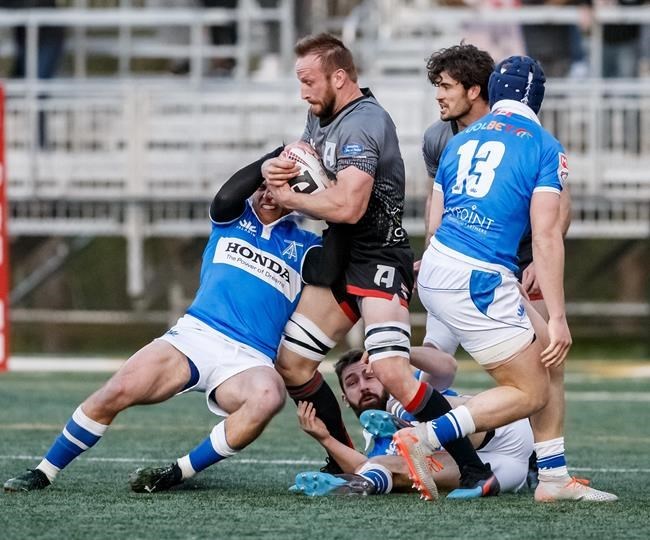 Sharing training facilities in Marietta, Ga., it's not unusual for players from Rugby ATL and the Toronto Arrows to cross each others' path.

And as co-captain of Rugby ATL, Canadian flanker Matt Heaton is happy to share local dining recommendations and other tips with the visiting Canadian side. But it will be all business Saturday when the two teams face off in Major League Rugby play.

It's the second meeting between the two in 2021. Rugby ATL, whose roster also includes Canadian lock forward Conor Keys, downed the Arrows 21-14 in the season opener March 20.

That was officially listed as a Rugby ATL home contest. On Saturday, ATL will deemed the visitors at Lupo Family Field at Life University.

" I know the boys love playing against Atlanta and the Canadian boys especially — against Heaton and Keys," said Arrows co-captain Lucas Rumball. "It's something we always look forward to."

The two teams are close, with the Arrows grateful for ATL's hospitality.

"Anything we've ever needed or asked for, they've delivered. It's been absolutely fantastic," said Chris Silverthorn, Toronto's director of rugby. "There wouldn't be a Toronto Arrows this year, I don't think, without Rugby ATL and the partnership that we've created here."

There is a trophy on the line Saturday with Toronto (3-4-0) and Atlanta (3-3-0) announcing this week the creation of the Fire and Ice Cup. The two clubs will contest the cup each season.

"We're trying to build sport rivalries," said Heaton, a native of Godmanchester, Que., who has roomed with Rumball in the past on international duty. "We've got two great franchises. We're happy to host them. We're teammates, we're all friends so there's that good little competitive rivalry in it.

"At the end of it, we're all going to have a beer and laugh about it."

The Arrows could use a chuckle. They've been away from home since mid-March.

"I would say it's taken a toll, absolutely," Silverthorn said of having to set up shop in the U.S. due to pandemic-related travel restrictions. "I think we've had a rough couple of weeks as a team. There's been a lot of personal stuff going on. But you know what, the guys have rallied around each other, really regrouping.

"Living in a hotel isn't easy, as anyone will tell you. We've had our moments. But on the whole, we're together. There have been some positives too."

Rumball says the separation from loved ones and friends is challenging,

"But the boys will bind together," said the influential flanker. "They'll find ways to make it easier on each other, whether it's going to grab a coffee, going to see a sight, doing something to take your mind off being away from familiar faces.

"But having people like Heats and guys we know here is great as well. Having everyone be so welcoming makes that home kind of environment away from home. So it's not easy, but the boys know that everyone here is pulling for them, everyone back home is pulling for them. So it makes it just slightly easier for us."

Both teams are coming off losses to NOLA Gold in the tight Eastern Conference, which sees the top five teams separated by just three points.

Atlanta, on a bye last week, went into last weekend first in the East and came out in fifth spot. Toronto has the same number of points as ATL but stands third on points difference.

"It will be who executes more consistently," he said.

This report by The Canadian Press was first published May 7, 2021