TORONTO — The Toronto Argonauts' defensive line will be a little older the next time it takes the field. According to sack leader Charleston Hughes, it will also be a lot hungrier.
Feb 12, 2021 12:35 PM By: Canadian Press 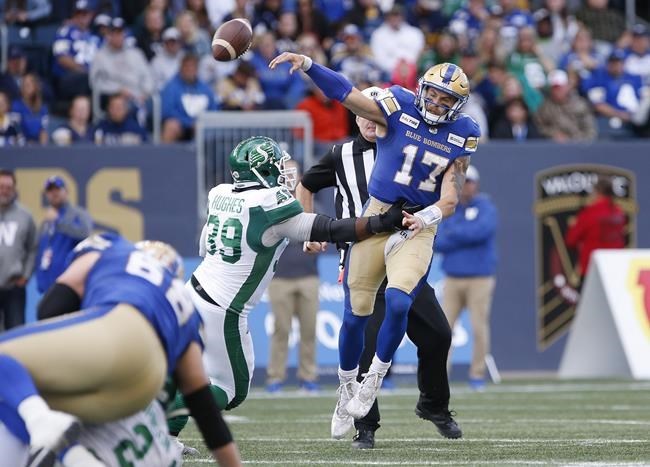 TORONTO — The Toronto Argonauts' defensive line will be a little older the next time it takes the field.

According to sack leader Charleston Hughes, it will also be a lot hungrier.

The Argonauts have heavily retooled their team for the prospective 2021 CFL season, and some of the biggest changes have come on the D-line.

The 37-year-old Hughes was signed by the club shortly after his release by the Saskatchewan Roughriders. He will join a line that features a couple of other grizzled newcomers in 32-year-old Cordarro Law and 36-year-old Odell Willis, whose signing was announced Friday.

"So when you've got those two aspects working together, then you've got a lot of people in the locker room who are going to be really hungry for winning a championship and winning ball games."

Law is the least decorated of the three new additions, but he had 10 sacks in 2019 with Calgary and Hughes likes what he brings to the Argos.

"I've played with that guy for a number of years man, and I know what he can bring to the table," Hughes said. "I know what kind of pass-rusher he is. I think we complement each other well, because he's just as smart of a player as I am."

Hughes will ply his trade in the East after 10 seasons in Calgary and two in Saskatchewan, and he suggested that quarterbacks in his new division should be prepared for his attention.

"I don't have to change nothing," he said. "It sounds like they're going to have to do a lot more studying and changing stuff around."

Hughes thought he might be back with Saskatchewan after he had 16 sacks in 2019, leading the CFL in that category for the fourth time in his career. But he said though, like other players, he offered to take a pay cut to stay with the Riders, negotiations never really got off the ground.

"It feels like I'm negotiating on Kijiji over a cellphone," is how he characterized his conversations with Riders general manager Jeremy O'Day.

Hughes said he will miss the famously rabid fanbase in Regina, but feels he's going to a team that appreciates his worth in Toronto.

"I think what it really boils down to is just being somewhere where you're valued," he said.

Willis, the latest addition to the line, is an 11-year CFL veteran and two-time CFL all-star who helped Edmonton win a Grey Cup in 2015.

The 31-year-old Wright was a first-round draft choice by Tennessee. His best season came in 2013 when he caught 94 balls for 1,079 yards and two touchdowns in 16 games for the Titans.

Auclair, from Quebec City, was selected sixth overall by Ottawa after recording 41 tackles in eight games in 2019 for Laval.

Awe put up 129 defensive tackles and 25 special-teams tackles over three years with B.C. and Toronto.

Meanwhile, linebacker Kevin Francis is returning to the Riders.

Francis was selected by Saskatchewan in the 2016 supplemental draft and has 15 defensive tackles and 37 special-teams tackles in 52 games with the Roughriders and Redblacks.

This report by The Canadian Press was first published Feb. 12, 2021.