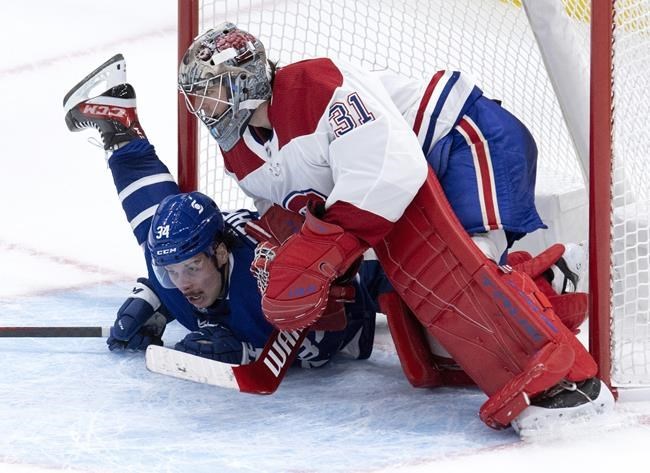 The Maple Leafs and Canadiens haven't been here in quite some time.

Largely at opposite ends of the spectrum the past few decades — one always seemingly in the ascension, the other trending downwards or rebuilding — the storied Original Six franchises find themselves battling atop the standings nearly a quarter of the way through the NHL's pandemic-shortened season.

Toronto and Montreal are fast, skilled and structured. Both added toughness in the off-season, are backed by solid goaltending, and each roster believes it has the necessary ingredients for a long run in the one-time-only, all-Canadian North Division.

The Leafs sit first overall in the league, while the Canadiens are just three points back with a game in hand. Dormant for too long, the rivalry is set to heat up this week with two meetings between teams looking to make a statement.

"As a kid you loved watching these games," said Montreal winger Josh Anderson, who grew up just west of Toronto in Burlington, Ont. "To be experiencing it now, it's very exciting. I know a lot of people will be watching."

The Canadiens host the Leafs on Wednesday at the Bell Centre before renewing hostilities Saturday at Scotiabank Arena.

"It's a classic rivalry," Montreal goalie Carey Price said. "They're fun to play in."

"It's never an easy match," said Leafs winger Mitch Marner, who's on a eight-game point streak. "Both teams come ready to play.

"You've got to really earn everything you get."

The atmosphere is always electric — even if one or both of the teams are struggling — with jersey-clad supporters bellowing support, so the only thing missing will be fans inside the arenas because of COVID-19 restrictions.

"Both crowds are lively and fun to play in front of," Price said. "We're going to miss them."

Montreal, which also plays Thursday against the Edmonton Oilers, dropped a 5-4 decision in Toronto on opening night in both teams' first action since the league's summer restart to the coronavirus-delayed 2019-20 campaign.

"We hold them in really high regard," Leafs forward Jason Spezza said. "They're a team that does a lot of things right. They had success in the bubble last year because of it. They're just a hard-working team, they're deep, they play the right way.

"It's going to be a big challenge."

The Canadiens, meanwhile, know they'll have to limit time and space for star Toronto centre Auston Matthews, who has goals in eight consecutive games, has scored in 11 of his 12 appearances this season, and has points in each of his last 10 outings.

"He's playing some excellent hockey," Price said. "His game speaks for itself. He's a powerhouse guy and he's got an amazing shot.

"It's fun to watch him play out there when I'm not on the ice."

In his second season with Toronto, Spezza said he's seen growth from Matthews, who was selected No. 1 at the 2016 NHL draft, in a number of areas.

"Auston's been on a mission for a while here," said the 37-year-old. "He's up and down the ice, he controls the play. He's such a big guy, the way he protects the puck. And then scoring big goals for us at big times. He held his composure, he spoke up a little bit in the room. I think he's growing his confidence as a leader.

"He's a special player and he's putting together an MVP-type season."

The Canadiens, meanwhile, certainly have the Leafs' attention after adding the likes of Anderson, winger Tyler Toffoli and defenceman Joel Edmundson during the off-season.

"Montreal is near the top of the league in a lot of the advanced stats," Toronto defenceman Justin Holl said. "It's definitely going to be a huge adjustment and something we've got to be ready for."

The Leafs are 7-0-1 over their last eight, but had a poor showing in Monday's finale of a three-game set with the Canucks. Toronto eventually got the job done 3-1 after a comatose opening 40 minutes to complete a sweep of the spiralling Canucks, but head coach Sheldon Keefe said the way things played out was actually a good thing ahead of the showdown with the Canadiens.

"Now that we're through the other side of it, I felt it was a bit of a gift for us as we transition from one series to the next," he said. "We know the challenges that come with playing Montreal. It's going to be a much different type of game than what we've seen ... less time and space with the puck, and the ability to smother you and counter and control play.

"We know what we're up against."

Keefe called it a "privilege" to be part of the renewed rivalry as Montreal and Toronto are set to meet for the second and third time this season, with seven more to come.

"There's so much history behind it," he said. "Passionate fan bases across the country ... across the world, really.

The Leafs and Canadiens haven't met in the playoffs since 1979, although part of that has to do with the teams residing in different conferences from 1981 to 1998. Toronto and Montreal nearly tangled in the 1993 Stanley Cup final, but Wayne Gretzky and the Los Angeles Kings spoiled those plans by eliminating the Leafs in a seven-game Western Conference final before falling to the Habs in five games.

Spezza said playing in this all-Canadian division as a result of border restrictions was always going to increase rivalries across the country. But having Montreal and Toronto battling for the head of the table should turn the temperature up even further — on and off the ice.

"That's two excited fan bases," he said. "We're aware of that. It's exciting for us as players, too. They're special rivalries that maybe we haven't seen a lot of the last few years. We have a chance to reignite those fan bases and the rivalry.

"As players, that's a great opportunity."

Asked his thoughts on some observers anointing the Leafs as the NHL's best team this early in the season, even though the Canadiens are nipping at their heels, Anderson said Wednesday and Saturday should offer some clarity.

"We're right there with them, right?" he shot back. "Obviously they've got a lot of skill, but we've got a pretty good hockey team, too.