Two Canadian athletes from different worlds met Saturday because of a combination of the best and the worst in human nature.
May 29, 2021 4:52 PM By: Canadian Press 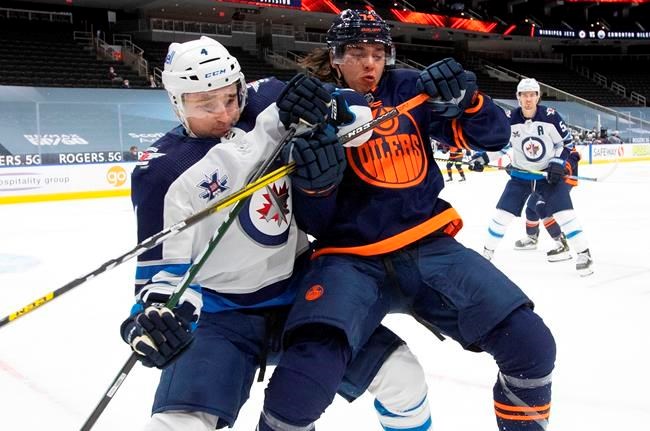 Two Canadian athletes from different worlds met Saturday because of a combination of the best and the worst in human nature.

Olympic cross-country ski champion Beckie Scott, who is the chief executive officer of Spirit North, was told by a colleague Tuesday about a sudden spike in donations to the organization, which works with Indigenous children to provide confidence, leadership skills, and mental and physical health via sport.

Twenty-five donations flooded the organization's website in half an hour "which is highly unusual," Scott told The Canadian Press on Saturday from Canmore, Alta.

"We were really puzzled," Scott said. "We hadn't connected the dots yet."

Bear confirmed the following day in a video statement he'd been subjected to "racist behaviour on social media" after Edmonton's elimination from the first round of NHL playoffs in four straight games by the Winnipeg Jets.

"I'm here to stand up to this behaviour, to these comments," Bear said during that statement. "I'm proud of where I come, I'm proud to be from Ochapowace First Nation."

Spirit North donations spiked by almost $10,000 in 24 hours. Donors indicated in online messages the contributions were because of Bear, Scott said.

"It felt very heartwarming to receive that support," Bear told The Canadian Press. "It shows people care. I believe I did the right thing.

"It's just really good to see the support in everyone who stands up with me and everything we're going through."

Bear was a child growing up on Saskatchewan's Ochapowace Nation when Scott won gold and silver medals in Olympic cross-country skiing in 2002 and 2006 respectively.

Scott received her gold medal two years after her 2002 race. She finished third, but competitors who beat her were eventually disqualified for performance-enhancing doping.

Founded in 2009, Spirit North gives Indigenous youth in 62 communities stretching from Ontario to B.C. to Northwest Territories the chance to ski, mountain bike, canoe and try other sports.

Half of the organization's board of governors are Indigenous and charity is guided by an Indigenous advisory council.

On her first trip to a Northern Alberta school to run a cross-country session, Scott says she watched an eight-year-old boy go from hiding in a cardboard box in the principal's office to throwing his arms in the air and laughing after skiing down a slope.

"The principal turned to me and said, 'that's the first time I've ever heard him laugh,'" Scott said.

"I think it's amazing. I didn't really know about Spirit North until this," Bear said. "It's drawn a lot of interest towards myself. I'm really interested in what she has to offer going forward."

Bear has played two seasons for the Oilers. He wore a jersey with his name spelled in Cree in an exhibition game against the Calgary Flames last July.

Scott's initial reaction to a jump in donations was she wanted to speak with Bear.

"That's the most important person who needs to know that these donations have come in his honour," she said.

"Ethan is a current athlete and I'm a former athlete. We both have the lived experience of the kind of benefits and values sport can bring to someone's life.

"Some kids in this country aren't given a chance to experience that. That's unacceptable, so we're very aligned in our values and a determination to try to change that."

"It's been a tough year for us," she said. "Ten thousand dollars really does feel like a lot at the moment."

This report by The Canadian Press was first published May 29, 2021.