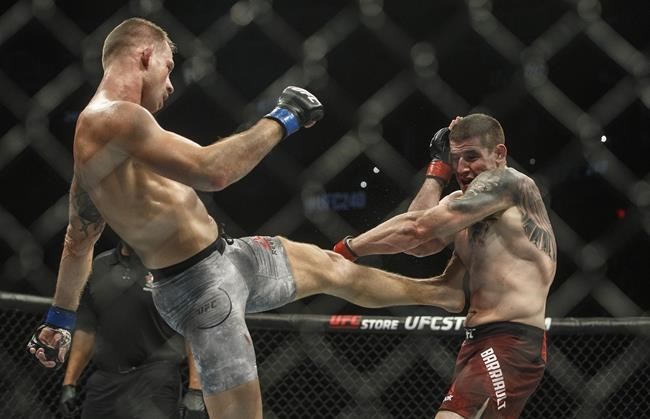 The fight was Barriault's first following a six-month ban for a doping violation that dated back to last summer. Azaitar was also coming off a seven-month drug suspension.

After splitting the first two rounds, Barriault (12-4-0 with one no contest) punished Azaitar (14-3-1) in the third with a 57-4 edge in significant strikes. Referee Jerin Valel finally stepped in with four seconds remaining.

"Listen, we worked a lot to be very aggressive," said Barriault. "We knew that he would come forward. He's a brawler, he likes to throw big bombs. I just needed to be composed and let everything loose.

"It took me one round, I think, to just let everything go. After that, I was just myself and did what I do good."

The UFC 260 main event at the UFC's Apex production facility pitted heavyweight champion Stipe Miocic against No. 1 contender Francis (The Predator) Ngannou. Miocic, a Cleveland firefighter when he's not cage-fighting, won by unanimous decision when they met at UFC 220 in January 2018.

It marked Miranda's fifth straight win, and third in the UFC. Robertson lost her second straight, dropping her UFC record to 6-4-0.

A winner of five straight and unbeaten in his previous 10 outings (9-0-1), Azaitar had not fought since July 2018 when he won his UFC debut by decision over Brazilian Vitor (Lex Luthor) Miranda. He was scheduled to meet Alessio Di Chirico last April and then Joaquin Buckley last October but both bouts were called off.

The smaller Azaitar, surviving an inadvertent shot to the groin early, was busier in the first round, landing some good knees and kicks.

Barriault was rocked early in the second round but kept going. The Canadian landed some hard elbows on the fence, keeping up the pace. Azaitar looked tired as the round wore on with Barriault battering him at the fence as the round ended.

Both men's faces looked like they had been in a fight to start the third. But Barriault looked fresher and an exhausted Azaitar went down about a minute into the round trying to retrieve his mouthpiece.

The fight was briefly halted as Valel stopped the action to return the mouthpiece. The fight resumed with Barriault pounding Azaitar in mount position until Valel stepped in

Canadian strawweight Randa (Quiet Storm) Markos was also slated to fight on the card but had to withdraw after contracting COVID-19. Her bout with Brazil's Luana Pinheiro has been shifted to May 1 on a card headlined by light-heavyweights Dominick (The Devastator) Reyes and Jiri (Denisa) Prochazka of the Czech Republic.

The 31-year-old Barriault, a native of Gatineau, Que., who fights out of Quebec City, tested positive for the prohibited substance ostarine last summer. Barriault blamed a supplement he had taken and the U.S. Anti-Doping Agency, finding no evidence of intentional use, settled on a six-moth suspension "that is consistent with low-level ostarine cases with evidence of contamination."

Barriault tested positive June 20 after his second-round KO win over Poland's Oskar (Imadlo) Piechota and July 30 in an out-of-competition test. The Piechota fight was subsequently deemed a no-contest.

The UFC supported Barriault with Jeff Novitzky, the UFC's senior vice-president of athlete health and performance, saying the Canadian tested positive for a "very very very small amount" of the prohibited substance.

His ban began July 21, the date his temporary suspension was imposed by the Nevada State Athletic Commission.

The 35-year-old Azaitar was banned after testing positive for tamoxifen and/or tamoxifen metabolite 3-hydroxy-4-methoxy-tamoxifen. His suspension dated back to Aug. 25, 2020, the date of his first positive sample.

Tamoxifen is a selective estrogen receptor modulator used therapeutically to treat certain types of cancer in women and also prescribed for men with various other conditions. USADA said while Azaitar was taking the substance was taken at the direction of a physician, he did not have a valid therapeutic use exemption.

Abu Azaitar is the older brother of undefeated lightweight Ottman (Bulldozer) Azaitar who was released and then reinstated by the UFC for breaking COVID-19 protocols in Abu Dhabi in January.

This report by The Canadian Press was first published March 27, 2021