MONTREAL — Pierre-Luc Dubois proved to be a huge pain for his hometown Montreal Canadiens. The native of Sainte-Agathe-des-Monts, Que., scored with 31 seconds remaining in overtime to give the Winnipeg Jets a 4-3 win over Montreal on Thursday night.
Mar 4, 2021 8:09 PM By: Canadian Press 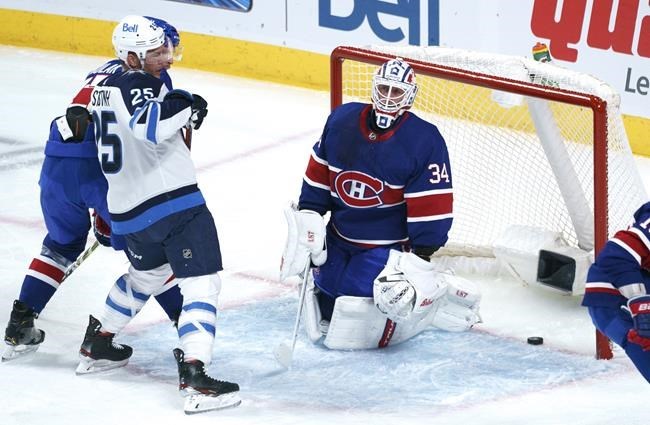 MONTREAL — Pierre-Luc Dubois proved to be a huge pain for his hometown Montreal Canadiens.

The native of Sainte-Agathe-des-Monts, Que., scored with 31 seconds remaining in overtime to give the Winnipeg Jets a 4-3 win over Montreal on Thursday night. Dubois fired a rolling puck over Canadiens goalie Jake Allen's shoulder for his fifth of the season.

"It (Bell Centre) is a very special place to play," Dubois said. "There are no fans (due to COVID-19 pandemic) so it takes away a little bit of that this year but I have a lot of friends and family who were watching the game.

"Obviously if it wasn't COVID they would've been here and it probably would've been more fun, more special. But a win is a win, two points is two points, especially in this division where it feels like  a lot of teams are close. We're at the midway point in the season so every two points are important right now."

Winnipeg improved to 5-0 in overtime this season while Montreal fell to 0-4. All four of the Jets' goals were scored by Quebec-born players.

Paul Stastny, born in Quebec City but plays internationally for the U.S., had two goals for the Jets (15-7-1) while Mathieu Perreault, of Drummondville, Que., scored the other. Winnipeg opened a five-game road trip with a third straight win this season over Montreal and has captured six of its last seven overall.

"It's always special, it's always fun to come back here," said the 35-year-old Stastny. "It's always a special place to play and for me it's where I scored my first goal.

"It's a cool place with a lot of history and you always kind of enjoy it. As I'm getting older now in my latter years you don't know how many more game you'll play here so just have fun with it."

Both Allen (23 saves) and Winnipeg's Connor Hellebuyck (33 stops) came up big in overtime.

Allen stopped Kyle Connor on a breakaway before turning away Blake Wheeler on a 2-on-1. Not to be outdone, Hellebuyck came up big on Montreal's Paul Byron in the extra period.

Corey Perry forced overtime with his third goal of the season at 18:36 of the third. It came with Allen on the bench for the extra attacker.

Stastny put Winnipeg ahead 3-2 with his second goal of the game at 3:39 of the period.

Brendan Gallagher and Tyler Toffoli also scored for Montreal (10-7-5), which fell to 1-1-2 since interim head coach Dominique Ducharme took over after Claude Julien was fired Feb. 24.

The Jets were opportunistic in the contest, taking advantage of Montreal mistakes in its own end. That's something Ducharme hopes his team will clean up when it closes out a three-game homestand hosting Winnipeg again Saturday night.

"We can cut down on those mistakes for sure," he said. "We don't need to go into details . . . guys know right after the play. We'll clean that up.

"Maybe sometimes it's about luck a little bit but something we control is high-percentage plays. Doing those things all the time, then luck is more on your side. We had too many of those (mistakes) tonight."

Allen got the start in goal after veteran Carey Price stopped 26 shots in a 3-1 in over Ottawa on Tuesday. That snapped the Canadiens' five-game winless skid.

Stastny opened the scoring at 10:39 of the first with his sixth of the season. Wheeler fired a pass in front that went off Stastny's skate and past Allen.

Perreault put Winnipeg ahead 2-0 at 15:25. Perreault converted a Toffoli turnover into his fifth of the season, beating Allen on the backhand.

Montreal outshot Winnipeg 13-5 in the second and scored twice to force a 2-2 tie. Gallagher converted on the power play at 9:53, firing a loose puck in front past Hellebuyck for his eighth of the year.

Toffoli made up for his miscue in the first with his 14th of the season at 16:53. It marked the second straight game that he's scored.

This report by The Canadian Press was first published March 4, 2021