LAS VEGAS — Patrick Marleau said he received many congratulatory messages — from former teammates to the legendary Wayne Gretzky himself — as he approached eclipsing the great Gordie Howe's record for NHL games played.
Apr 19, 2021 11:23 AM By: Canadian Press 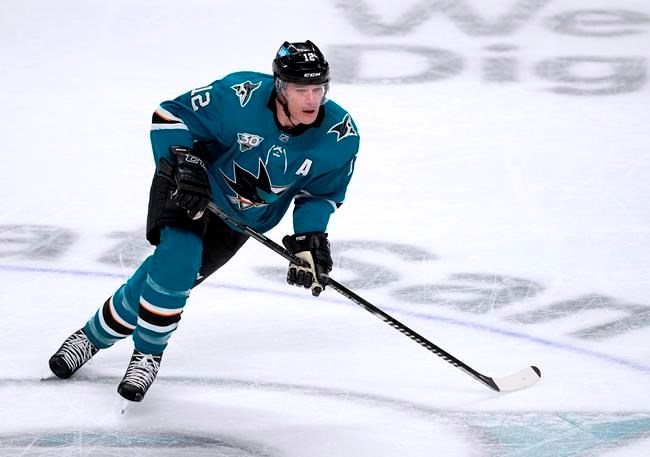 LAS VEGAS — Patrick Marleau said he received many congratulatory messages — from former teammates to the legendary Wayne Gretzky himself — as he approached eclipsing the great Gordie Howe's record for NHL games played.

He talked about one message in particular, from Gordie's son Mark. The younger Howe said his dad would have been proud to see his record broken by another player from his home province of Saskatchewan.

The 41-year-old Marleau was set to suit up for the 1,768th time Monday — setting a new mark for NHL longevity — when the San Jose Sharks faced the Vegas Golden Knights.

"Part of the message that Mark gave to me yesterday was that it's kind of fitting that I am from Saskatchewan, and that (Gordie) would be very proud of me breaking the record tonight, being a small-town farm boy from Saskatchewan."

Marleau's wife Christina and four sons are scheduled to be at the road game, which wouldn't be possible in San Jose, where fans still aren't allowed during the pandemic.

"My wife, I couldn't have done it without her over all these years," Marleau said. "She's by far my biggest supporter.

Since being picked second overall in the 1997 NHL draft by San Jose, Marleau has notched 566 goals and 630 assists. Apart from two seasons with the Toronto Maple Leafs and eight games with the Pittsburgh Penguins, Marleau has spent the rest of his career with San Jose.

Marleau said by his fifth year in the NHL he had an idea that he would be in for a long professional career.

"You've had some good years, you've played a number of games, but you're starting to feel you're getting a really good grasp on the hockey lifestyle and what you need to do to be successful," he said.

Told that the Golden Knights had spoken in glowing terms about Marleau's achievement before the game, the veteran Sharks forward said he was humbled.

"It's super special to have that respect, and to have guys say such kind words," Marleau said after a pause. "you battle with these guys day in and day out. They know the grind. They know what it takes to play in this league. And for them to show their respects and have all these kind words, it's very humbling."

Flames winger Milan Lucic, who was set to be honoured Monday night at the Saddledome for reaching 1,000 career games, marvelled at Marleau's mark.

"Pretty awesome," Lucic said. "It goes to show how durable and great of a player he's been since he entered the league in '97.

"When you hit a thousand, you think back on how long and how hard it is to get to this mark. And then you add on another, what is it 760? That's another nine, 10 years there."

Calgary coach Darryl Sutter, who was Marleau's first NHL coach with the Sharks, said setting the NHL games record is more than a testament to Marleau's durability.

"Number one you'd say longevity, but you'd have to say professionalism, training, healthy, play two positions, great attitude, great work ethic, not playing just for the money, playing because he loves the game. All those things go together.

"It's just going to get added onto. Anyone who breaks Gordie's record, not including WHA games, it's significant."

Marleau also helped Canada win two gold medals at the Olympics in 2010 in Vancouver and 2014 in Sochi.

Howe also played an 419 games in the World Hockey Association, which don't count toward his NHL record.

— With files from Donna Spencer in Calgary.