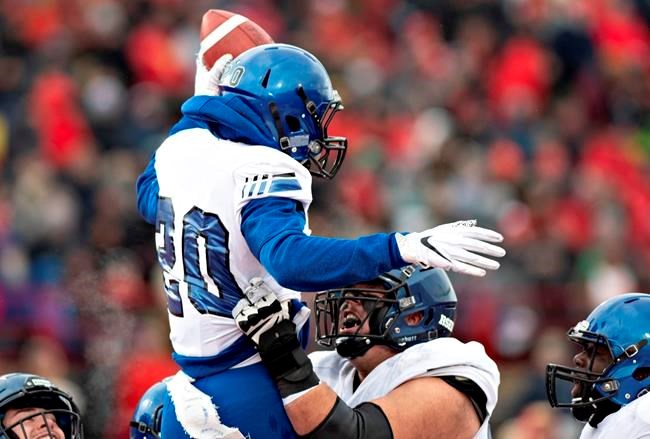 He was also the top U Sports player (10th overall) on the CFL Scouting Bureau's winter list of the top-20 prospects for the '21 draft. The first nine all played in the NCAA.

"It's a sad year for every football player in Canada," Lestage told reporters during a Zoom call Monday. "When I was at the College Gridiron Classic, many scouts asked me, 'What was the hardest time in your life and how did you overcome it?'

"I always say it's pretty much what I've had to live this year. We know COVID is going to end sometime . . . so you just have to be ready. I can't wait to play football and put pads (on) again, that's for sure."

Lestage participated virtually in both the Shrine Bowl and College Gridiron Classic but played in the Tropical Bowl on Jan. 17 in Orlando, Fla., before NFL and CFL officials. He played guard in the game but also worked out at centre during practice in his first action since Montreal's 27-13 loss to Calgary in the '19 Vanier Cup.

"When I went to the Tropical Bowl I could say I was a little bit rusty to be brutally honest with you," he said. "Maybe the differences in the rules made it a little bit more difficult, but for sure I was rusty.

"Maybe a week or two of camp (and) I could be ready for a season."

Lestage, of Saint-Eustache, Que., was a '19 second-team All-Canadian. While the 23-year-old is a bona-bide bluechip CFL prospect, he's also been seen and graded by NFL scouts.

While he's doing everything he can to fully prepare for 2021, Lestage admits the year away from football hasn't helped his cause.

"If we're not playing football we're not getting better at football," he said. "But there's also other stuff you can work on when you're not working in football.

"I'm not really complaining. Of course I'd love to be playing football right now but I don't think it will be that bad for me this season whether I play with the Carabins or in the CFL or NFL."

A return to Montreal, though possible, seems unlikely. The expectation is Lestage will be playing professionally in 2021.

If that's in the NFL, Lestage might not have the benefit of time to get up to speed. Last year, the pandemic forced clubs to eliminate rookie minicamps and organized team activities _ which both give young players opportunities to get acclimated with pro football.

"I think (no rookie camps or OTAs) would have a big impact," Lestage said. "I'm hoping there will be OTAs or rookie mini-camps . . . if there's not I'll be ready for it and hoping I perform well enough so they can keep me on the team."

If an NFL career doesn't pan out, Lestage would have no problem returning to Canada. He grew up watching the Montreal Alouettes _ both on television and at Molson Stadium — and would welcome a CFL opportunity.

He'd be especially eager to play in Montreal before family and friends and not have to relocate to a new Canadian city. And there'd also be reuniting with Danny Maciocia, the Alouettes GM who served as Lestage's college coach.

"I'm not really connecting dots right now, I'm just going one day at a time," he said. "But it would be very nice to play for the Alouettes.

"I watched games on TV with my parents, I went to games at Molson Stadium. If I don't make it (in NFL) I'm just happy to be in the CFL because growing up . . . it was pretty high on my radar."