The story of Steve Konchalski's career is written in the photos that paper the walls of his office at St. Francis Xavier University. There are more than 250, of all the teams coached and lives touched in Antigonish, N.S.
Mar 5, 2021 9:52 AM By: Canadian Press 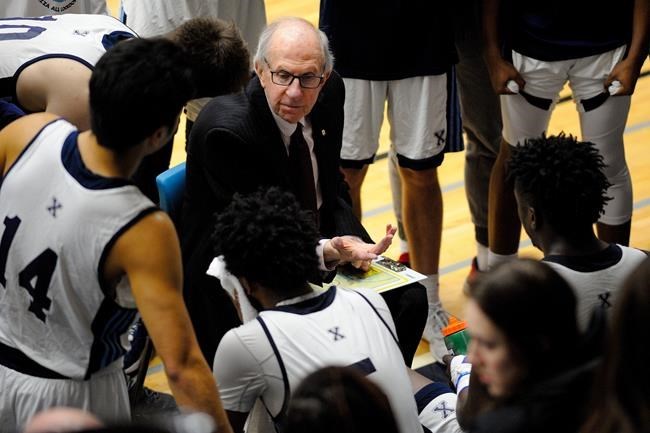 The story of Steve Konchalski's career is written in the photos that paper the walls of his office at St. Francis Xavier University.

There are more than 250, of all the teams coached and lives touched in Antigonish, N.S., including three national championship squads and photos that are more than four decades old.

"Looking at those pictures gives me energy, it reminds me of why I coach, not just to win the games, but it's in the great relationships and helping young people through a pivotal time in their lives," Konchalski said.

This was to be Konchalski's 46th — and final — season coaching the X-Men, but COVID-19 brought Canadian university sports to a halt. And so, on Saturday the X-Men will host Acadia in a tribute game to "Coach K."

"It will be emotional, but it will be more my family, like my daughter (Julianne) in Calgary who's the emotional one, she says every time she sees a tweet about me retiring she cries," the 75-year-old coach said.

Because of COVID-19 protocols in Nova Scotia, only 100 invited guests can attend the game on Coach K Court at the Amelia Saputo Centre at St. FX. Wife Charlene MacFarlane will be there, but travel restrictions and quarantine protocols means their three kids Julianne, Maria and Chris will have to watch the game's live stream.

"We knew this day was coming for a long time, but the last several years, I started to really dread knowing that," Julianne Konchalski said from her Calgary home.

"I really wanted my baby (son Luther is eight weeks old) to attend the game in person. But I was talking to my dad today on the phone, and I said it's not sad, we have so many great memories and we're so grateful. It's the sadness of letting go of a chapter of our lives."

Hosting Acadia in his final game — No. 1,495 — makes for a full-circle finale. Konchalski played his college career for the Axemen; it's what drew him from New York to Nova Scotia in 1962, where he'd meet wife Charlene and put down deep roots. He led Acadia to its first national title in '65, earning tournament MVP honours.

In order to play Saturday, the Axemen loaded onto a team bus this week and drove three hours round trip from Wolfville to Digby to undergo COVID-19 tests.

"(Playing for the Axemen) changed the whole direction of my life, so to coach my last game against Acadia is of significance to me," Konchalski said.

Acadia has also been the source of some of Konchalski's wilder coaching moments. A 1980 game versus the Axemen ended with some heated moments, and when Acadia coach Ian MacMillan approached him in the handshake lineup waving a finger, Konchalski grabbed the finger and bit it.

"Sometimes I long for those days," St. Francis Xavier athletic director Leo MacPherson told the New York Daily News a few years ago. "Today, Steve would be suspended, but boy, that was the best marketing you could do back then!"

When the teams met two weeks later at Acadia, Axemen fans erupted, pointing bandaged fingers at Konchalski when he walked into the gym.

"He was intense," said Raptors broadcaster and former NBA player Leo Rautins, who played for Konchalski when he was a national team assistant under the late Jack Donohue. "People forget Steve was a player too, right? He played ball. He's a New York kid. So he's got that street ball in him."

Konchalski is in four sports halls of fame, and was Canada's head coach from 1995 to '98. Canada Basketball brought him back as a mentor coach in 2010, and he was with Roy Rana's team that won bronze at the 2010 FIBA U17 world championships in Hamburg, Germany, and the U19 team that won a world title in Cairo in 2017.

"We had a lot of fun together. He's become a great friend."

A decade later, Konchalski still gets teased over a night in the hotel bar in Hamburg. Rana and his staff ordered pints of beer to quench their thirst during a Hamburg heat wave that saw temperatures soar to 40 C.

But when the waitress got to Konchalski, "She says 'No, you can only have a half pint.' She refused to give him a big beer," Rana said with a laugh.

"I don't know if it's because she thought he was a senior citizen, but we just laughed our asses off."

It's disappointing the pandemic robbed Konchalski of one final season, his colleagues say.

"I feel so fortunate that he was an assistant every year that I played on the Canadian national team," said Jay Triano, now the lead assistant with the Charlotte Hornets. "Not just a great coach, but a great man. Everyone who played for him left a better player and better person."

St. FX should have been hosting the U Sport Final 8 national championship this month. Konchalski said talent-wise, his team was probably the best its been in eight or nine years. He thinks they would have been competitive.

"So, I'm happy for the players that they get a chance to play against somebody else," Konchalski said of Saturday's exhibition. "When the pandemic came, and it became obvious that we weren't going to have a season, I turned my focus to the mental health of our players, and preaching to them that you control what you can control. And it's been really remarkable how, without having one game to play thus far, they've come to practice every day to compete, to work hard."

St. FX is honouring Konchalski with daily video tributes on its website. The videos opened the memory floodgates for his kids.

Son Chris, who works in forestry in Terrace, B.C., remembers accompanying his dad on the road, and being on the bench when the X-Men won their first of three national titles in 1993.

"But what sticks with me the most was just the transcendence of class and race that the game of basketball can bring, as a small-town kid from Antigonish, and being around all of these guys that my dad was mentoring, from all over the world and all walks of life," said Chris,  describing a family home that bustled with players coming and going. There are still bags of player belongings in the basement.

"It's like a museum," Chris said. "Much to my mom's chagrin. But they were like my big brothers. It was cool."

Richard Bella was among Konchalski's top global recruits. The Olympian and two countrymates came to St. FX from the Central African Republic. Bella starred on the '93 team. He later asked Konchalski to be best man at his wedding.

Julianne remembers the drive back to campus after the '93 championship. Julianne and mom Charlene were driving behind the team bus, which was met in Antigonish by fire trucks and police cars for a celebratory escort back to the gym.

"So many amazing memories," Julianne said.

"The biggest thing I learned from my dad was his job never seemed like work to him, because he loved it so much. And so that was always my goal, to find a career that I'm super passionate about. I was able to do that," said Julianne, who's a special education teacher. "He goes into the gym every single day of the year and has always enjoyed it so much."

"We actually got closer then," she said from her Toronto home. "The teams travelled together, we practised right after one another. That was a really neat time to be able to support each other through all the ups and downs of the season, and being able to witness what he does first-hand on the job. That was definitely a highlight for me."

The pandemic dealt Konchalski another big blow recently. His brother Tom, a legendary basketball scout, died on Feb. 8 of prostate cancer. Konchalski couldn't visit his brother in a New York hospice in his final days.

"Having to watch his funeral live-streamed was probably one of the most difficult things I've ever had to do," Konchalski said.

Konchalski doesn't plan on leaving the game, calling himself a "basketball lifer." He plans to continue working with Canada Basketball and is excited for the next chapter. He's leaving his team in good hands, he said, with Tyrell Vernon.

And while this season played out much differently than he would have drawn up, Konchalski is looking forward to Saturday.

"It will be nice to actually go out and retire with an actual game," he said, "than just fade into the sunset."

This report by The Canadian Press was first published March 5, 2021.