CALGARY — Auston Matthews and John Tavares rode to the rescue scoring third-period goals for the Toronto Maple Leafs in a 4-2 win Sunday over the host Calgary Flames.
Apr 4, 2021 9:36 PM By: Canadian Press 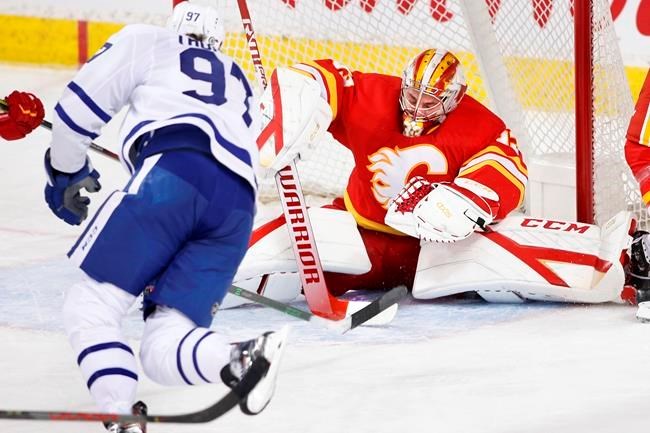 CALGARY — Auston Matthews and John Tavares rode to the rescue scoring third-period goals for the Toronto Maple Leafs in a 4-2 win Sunday over the host Calgary Flames.

Matthews and Tavares each had a goal and an assist, and Morgan Rielly and Alex Galchenyuk also scored for Toronto (25-10-3).

Maple Leafs goaltender Michael Hutchinson made 32 saves for the win.

"It definitely wasn't our best, I think we looked a little sluggish at times," Tavares said. "We defended really well and I thought played a quicker game in the third, which I think allowed us to take control.

"There's going to be nights, you don't have your best, but you've got to work and compete and find ways to get your game going. I think we did that."

The Maple Leafs continue to top the NHL's North Division and are 6-3-1 in their last 10 games.

"In order to keep up, the team has to play at a pace," Sutter said. "You have to be able to execute at that pace and check at that pace. For some of our players, that's difficult."

David Rittich stopped 26-of-30 shots for the loss in the first of back-to-back games between the division rivals.

The Flames are at home to Toronto again Monday. Toronto leads the nine-game season series 5-2.

Calgary trails the Montreal Canadiens, holding down the fourth and final playoff spot in the division, by six points.

Matthews scored his league-leading 25th from close range. From the goal-line, Mitch Marner dished to his linemate driving the net for the insurance goal.

Rittich made initial saves on William Nylander and Tavares, but the rebound went off the skate of Flames defenceman Noah Hanifin and into Calgary's net.

Hanifin swung his stick in frustration and broke it across Calgary's post.

"There's a reason why (the Leafs) are where they are," Flames captain Mark Giordano said. "And you could tell they were coming out with the mentality to win the game in the third.

Galchenyuk scored his first as a Maple Leaf and evened the score at 2-2 at 17:08 in the second period. The forward converted a goal-mouth feed from Tavares.

"We obviously were not very good at all through 40 minutes, but we were in a game," Toronto head coach Sheldon Keefe said.

"A big goal there late in the second. The way that it worked out, we really needed to find a way to get better for 20 and if we did, we liked our opportunity to get points here tonight. I really liked our third."

Mangiapane spotted the Flames a 2-1 lead with 39 seconds remaining in the opening period.

He pulled Mikael Backlund's pass out of his skates and got an off-speed shot away that beat Hutchinson's blocker.

The hosts drew even on Nordstrom's goal at 12:43 of the first period. He tipped a Giordano slapshot upstairs on Hutchinson for his first goal as a Flame.

The Leafs defenceman skated the puck to the far faceoff circle and beat Rittich with a wrist shot over the Calgary goaltender's left shoulder.

Calgary is scheduled to host the Vancouver Canucks on Thursday and Saturday. The Canucks, however, were dealing with 16 players on the NHL's pandemic protocol list Sunday.

This report by The Canadian Press was first published April 4, 2021.