CAPE TOWN, South Africa — Firefighters in Cape Town finally brought a wildfire under control Monday after it swept across the slopes of the city's famed Table Mountain, burning the university's historic library and forcing the evacuation of some neig
Apr 19, 2021 1:44 PM By: Canadian Press 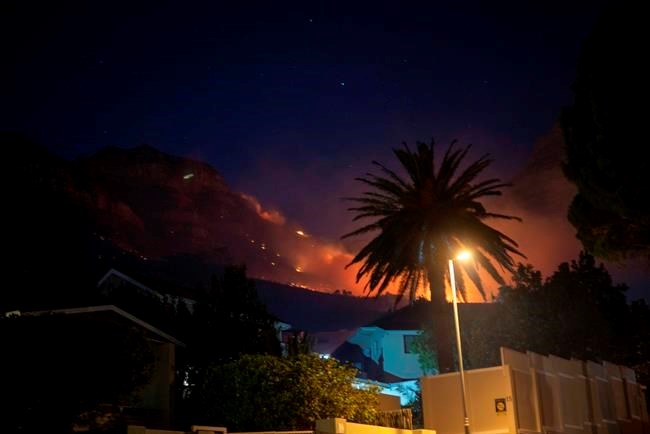 CAPE TOWN, South Africa — Firefighters in Cape Town finally brought a wildfire under control Monday after it swept across the slopes of the city's famed Table Mountain, burning the university's historic library and forcing the evacuation of some .

The fire is being watched for flareups amid high winds and hot, dry conditions.

The fire had already badly damaged the library and other buildings on the campus of the University of Cape Town on Sunday, as well as other historic buildings nearby. Fueled by the high winds, it spread through the wild bush on the mountain slopes toward the city's and the surrounding residential areas.

Devil’s Peak, one of the iconic points of the mountain which overlooks downtown Cape Town, was lit up by flames as the fire raged through the night. Residents of suburbs on the mountain slopes were evacuated early Monday as the blaze came dangerously close to their homes.

Fire-fighting helicopters with water containers suspended on ropes had been scooping up water from swimming pools and the nearby ocean and dumping it on the fire. But they were grounded on Monday because of the strong winds.

Four firefighters were injured battling the blaze on the slopes, said officials. The South African army had offered to help with some of its aircraft.

“It’s a massive wind that’s blowing, and that is actually fueling the fire to spread in each and every direction,” Cape Town mayor Dan Plato said.

A man in his 30s was arrested on suspicion of arson for setting additional fires, another city official said, but it's not clear if he was responsible for starting the blaze. The man was arrested after witnesses reported seeing three people moving through flames setting more fires, Cape Town safety and security official JP Smith said.

Smith said the city had commissioned a forensic fire investigator to look into the cause.

Wildfires on the mountains surrounding Cape Town are fairly common during the hot, dry summer months and are sometimes whipped up into huge, uncontrollable blazes by strong coastal winds. The temperature in Cape Town peaked at 35 degrees Celsius (95 Fahrenheit) Sunday and the winds hit the city overnight and Monday.

About 250 city and volunteer firefighters were deployed to battle the fire, which damaged four buildings at the University of Cape Town. The Jagger Library's main reading room, where rare and unique African books and manuscripts were kept, was gutted and some of the “priceless” works had been lost, the university said. Others were saved after fire-proof doors activated and sealed off parts of the library.

Library staff had watched “in horror” from a safe distance as the building burned, the library’s executive director, Ujala Satgoor, said.

A windmill, built in 1796, and a restaurant near a memorial for the British colonial politician Cecil Rhodes also burned down.

The university has been completely evacuated and shut down and meals were being provided for around 4,000 students who had to quickly leave the university campus and their residences, according to Gift of the Givers, a disaster response organization. Many of those students were taken to local hotels, the group said. Activities at the university were suspended until at least Wednesday.

The group said it is also supplying food and water to the firefighters who had been working for more than 24 hours to control the fire.

Heavy smoke hung over parts of Cape Town and people were advised to cover their mouths and noses with wet towels or rags while being evacuated.

Dramatic videos and photos were posted on social media by people who came perilously close to the blaze on the slopes of Table Mountain, which is popular among runners and mountain bikers on the weekend.

Lisette Lombard posted a video of herself escaping from the fire after going on a trail run on Sunday. She's seen running, breathless, as plumes of smoke rise close behind her. She said her car and others left in a parking lot were completely burnt out and she eventually found help from firefighters coming up the mountain.

“When they told me that it (the fire) is out of control, that is when the penny dropped on how dangerous the situation was and how lucky I had got,” she told South Africa's IOL news .