TORONTO — The Edmonton Oilers didn't want to put too much emphasis on their ninth and final regular-season meeting with the Toronto Maple Leafs. But it was evident this one mattered a little more than most.
Mar 29, 2021 10:04 PM By: Canadian Press 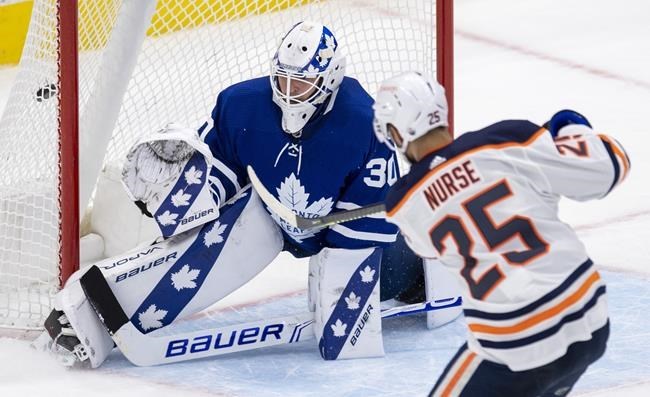 TORONTO — The Edmonton Oilers didn't want to put too much emphasis on their ninth and final regular-season meeting with the Toronto Maple Leafs.

But it was evident this one mattered a little more than most.

Darnell Nurse scored 17 seconds into overtime Monday as the Oilers battled back to down the Leafs 3-2 and snap a four-game losing streak against the North Division leaders.

"We knew what we were capable of," said the defenceman. "A big win for us."

Nurse buried his 12th goal of the campaign — which leads all NHL blue-liners — off a pass from Connor McDavid after Oilers netminder Mike Smith robbed Auston Matthews right off the opening faceoff in the extra period.

The clincher came 48 hours after Matthews pinballed a shot home in Toronto's 4-3 OT victory on the same ice, with the last touch coming off Nurse's skate.

"That'll be the joke — two overtime goals back-to-back," Nurse said with a grin. "It's good to be on the other side."

Josh Archibald and Kyle Turris had the goals in regulation for Edmonton (22-13-1), while Smith stopped 29 shots. McDavid, who tops the league with 63 points, found the scoresheet for an 11th consecutive game.

The Leafs swept the Oilers three straight by a combined 13-1 total in the Alberta capital earlier this month, but the matchups have been close otherwise in 2021.

"We look at the body of work," said Nurse, whose team is now two points back of Toronto in the standings with one more game played. "Obviously we have those three games where they smoked us on home ice. The six (other) games we played tight, played hard.

"That's more indicative of our play and how we are as a team."

Matthews, with his league-leading 23rd goal, and Mitch Marner, with a goal and an assist, replied for Toronto (22-10-3), which got 20 saves from Michael Hutchinson. Justin Holl chipped in with two assists as the Leafs fell to 6-1-2 against the Oilers.

"We're both teams that like to play fast and like to play with the puck," Matthews said. "Throughout this year we played pretty solid against them. It would have been really nice to get this extra point here tonight because we're not seeing them again until maybe playoffs.

"It still kind of stings, but all in all so far this year we played pretty well."

Nurse, who scored his 11th of the season Saturday to set a career-high, has taken massive strides offensively in the NHL's pandemic-shortened season.

"Guys that put the work in and are passionate to get better, you like to see them get the results," Oilers head coach Dave Tippett said. "It's a great feather in the cap, and there's a lot of young players that should be looking at what he's doing and recognizing that's how you get better."

Hutchinson got the start with Jack Campbell (leg) not at 100 per cent and Frederik Andersen out with a lower-body injury. Campbell, who moved to 6-0-0 this season with Toronto's 4-3 OT win over Edmonton on Saturday, got the night off with No. 4 option Veini Vehvilainen serving as the backup.

Hutchinson made 31 saves in a 3-0 shutout of the Oilers on March 1 as part of that sweep, but was pulled after allowing two goals on three shots against the Ottawa Senators in his last start.

The Oilers will now head back to Montreal for a Tuesday contest at the Bell Centre to make up one of the three games postponed last week when two Canadiens were placed on the NHL's COVID-19 protocol list. The Leafs, meanwhile, open a four-game road trip through Winnipeg and Calgary on Wednesday.

Down 2-1 through 40 minutes Monday, the Oilers evened things up 1:20 into the third period when Adam Larsson's point shot that was sailing wide went in off Turris, who was on the COVID-19 protocol list from March 9 to 15 and returned to the lineup after sitting out the last eight games, for his second goal of the campaign.

"I was starting to get my legs back and starting to feel better," Turris said. "(Going into protocol) at that time, it was a bit frustrating."

William Nylander and Alex Galchenyuk came close to putting Toronto back in front midway through the period, but were both denied before John Tavares rang a shot off the crossbar.

Smith then played his part again early in OT to set up the winner.

"He's been unbelievable," Nurse said. "Whenever you have a guy back there playing like that, it's a lot of confidence within the group."

Edmonton opened the scoring at 6:15 of the first when Josh Archibald blew past Toronto's defence following a faceoff in the Oilers' end and beat Hutchinson on a breakaway move to the backhand for his sixth.

But Marner replied for the Leafs just 1:44 later when he took a pass from Zach Hyman down low, stepped around Tyson Barrie and outwaited Smith before burying his 13th.

Matthews then gave Toronto the lead at 11:08 when he collected a loose puck at the side of the net, wheeled out to get a better angle and roofed his 23rd upstairs on Smith's short side.

Ilya Mikheyev had a chance to put the Leafs up 3-1 five minutes into the second, but Smith was at full stretch to stop the speedy winger and keep the Oilers within striking distance.

"They're a measuring stick team in our division," Tippett said of Toronto. "We wanted to come in and play well."

This report by The Canadian Press was first published March 29, 2021.

Alberta's Boser set to face off against the Sledgehammer on June UFC card
Apr 19, 2021 7:11 AM
Comments