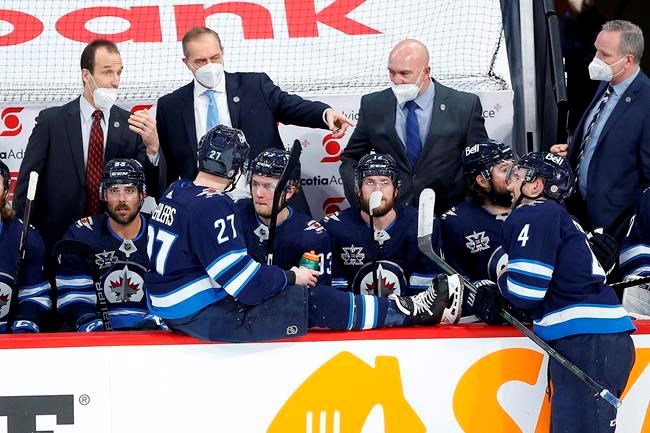 Head coach Paul Maurice remembers the spring of 2002 very well – and the stress that came with it.

At the time, Maurice was behind the bench for the Carolina Hurricanes, watching Jose Theodore make miraculous save after save for the Montreal Canadiens. Carolina eventually went on to win that series 4-2.

Nineteen years later, Maurice has seen his Winnipeg Jets stifled by another Canadiens goalie, Carey Price, including being blanked 1-0 on Friday night. The Jets are down 2-0 in the second-round playoff series. Games 3 and 4 are Sunday and Monday in Montreal.

“In one of those games, we got down 2-1 in that series,” Maurice recounted on Saturday before his team travelled to Montreal. One night 19 years ago, he said, the Hurricanes outshot the Habs 46-16 and lost 4-1.

But Maurice said the situation is slightly different this time around.

“If we were getting a whole lot of offence, if we were putting up 45 shots with 15 (grade) A chances, it can get into your head," he said. "But last night, we gave up a short-handed goal. On five-on-five, our guys put up a zero too.

“We have our anchor at the other end of the ice in our net too. The goaltending almost isn’t as much of a factor maybe as people think. We haven’t generated the offence we would like to in this series. And we may not with, right now, going the first two with (Paul) Stastny and then Stastny and (Mark) Scheifele out. So a 1-0 game is a place we need to get real comfortable with.”

Stastny accompanied the Jets to Montreal. The veteran player missed the first two games of the series due to an undisclosed injury. Scheifele will miss the next three games as he serves a four-match suspension for his charge on Jake Evans at the end of Game 1.

On Saturday, Dubois said he didn’t see his role as “filling in” for Scheifele in his absence. Instead, the Jets forward said he could best serve the team simply playing his own game.

Dubois did admit his confidence level might not be at an all-time high.

“It’s been a long season. It’s been a season of ups and downs. But I work hard just so that confidence doesn’t go down, even if you’re not scoring or even if you’re not doing as much offensively as you want. It’s a building process, it’s building blocks. It’s not just results, it’s also the work that goes in.”

Dubois performed well in the NHL’s bubble in Toronto last summer, helping the Columbus Blue Jacks defeat the Maple Leafs in the play-in round before losing to the Tampa Bay Lightning. He collected 10 points in as many post-season games.

Dubois noted that he needed to move around more on the ice in order to create space for his wingers but insisted that “last year in the post-season was last year, and this year is this year.”

Maurice was asked how his young centre Dubois could do better this year in order to find the same playoff success as 2020.

“He was really good in that series,” said Maurice. “I don’t now if you’ve noticed this though, but if you play Toronto, things have a tendency to get magnified. It’s just a thought, I don’t know if I could prove that.

“So he was good in that series and physically dominant. We think he can do some things that use speed and size with the puck and saw pieces of that. But we obviously think he can get to the net.”

Jets centre Adam Lowry says a main focus for Winnipeg has to be making life difficult for Price, who has stopped 57 of 60 shots after two games this series.

“That’s the way we’re looking at it. It’s not just sit back and let the game come to us. It’s going to be push the pace, use our speed but be smart at the same time.”

This report by The Canadian Press was first published June 5, 2021.