CALGARY — Late-game struggles proved costly for Canada's Kerri Einarson on Saturday at the LGT World Women's Curling Championship. Einarson started strong in both of her matchups but didn't finish the way she wanted.
May 1, 2021 10:14 PM By: Canadian Press 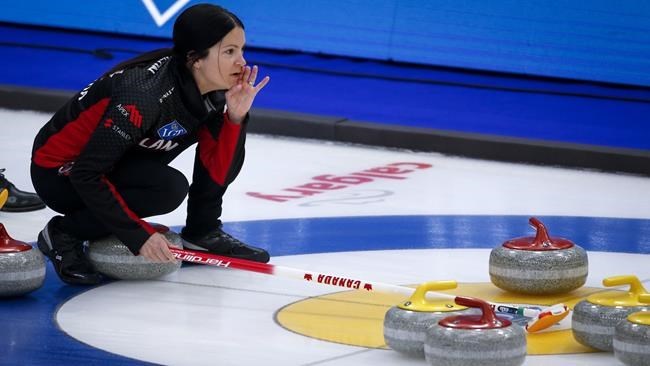 Einarson started strong in both of her matchups but didn't finish the way she wanted. An 8-5 loss to Switzerland's Silvana Tirinzoni was followed by an 8-7 defeat to Russia's Alina Kovaleva, leaving Canada in an unexpected 1-3 round-robin hole.

In the afternoon draw at WinSport's Markin MacPhail Centre, Einarson's final rock in the ninth end rolled out to give Switzerland a back-breaking steal of two. Canada was run out of rocks in the 10th.

"I just lost maybe a little bit of focus in that ninth end," Einarson said. "I just kind of babied my first one and it just grabbed. I had perfect draw weight all game. It happens and we've just got to move forward."

Canada took a 3-0 lead in the first end of the nightcap when Kovaleva was heavy with a draw. The Russian skip eventually found her rhythm and drew the four-foot ring to score one in the 10th end for the win.

"We're definitely leaving it all out there," said Canada third Val Sweeting. "I think we're still playing really well as a team. We've just got to stay strong until the end. There's lots of week left. It's still in our own hands. We still control everything out there."

Canada will play Tabitha Peterson of the United States on Sunday.

Einarson, from Camp Morton, Man., has had strong results so far in the curling bubble.

But a punishing early schedule against several top contenders has left little room for error. Mistakes have been untimely and magnified.

Einarson opened with a loss to reigning Olympic champ Anna Hasselborg of Sweden before rebounding with a victory over the Czech Republic's Anna Kubeskova. Tirinzoni, meanwhile, is the reigning world champion and Kovaleva leads the standings at 4-0.

The two-loss Saturday will put the pressure on a Canadian side that is making its women's worlds debut.

"It's OK to lose a couple against some really good teams," Meilleur said. "We just know we have to capitalize on those games coming up and we can still put ourselves in a really good spot."

Kovaleva made a brilliant hit through a tight port with her first stone in the eighth end. Einarson rolled out with her last throw to set up Russia to draw for three and a 7-6 lead.

Einarson settled for one in the ninth end when she was unable to hit and stick. Tied with hammer coming home, Kovaleva made a draw to the four-foot ring for the single point and the victory.

"We just have to play a full 10 ends and that's all it comes down to really," Meilleur said. "There's teams that are going to make really good shots against us and we have to bounce back and play better the next game. If we lose a couple, we lose a couple.

Sweden, Switzerland and Scotland's Eve Muirhead were unbeaten at 3-0. The Czech Republic and China were tied in fifth place at 2-1 while Germany and the United States were at 2-2.

Canada was alone in 11th place in the 14-team field. The top six teams will make the playoffs and secure Olympic berths for their respective countries at the 2022 Beijing Games.

Einarson would have represented Canada at last year's world championship but the event was cancelled at the 11th hour due to the pandemic.

Brendan Bottcher's Alberta-based team made the top-six cut at the world men's playdowns last month but was eliminated in the quarterfinals.