CALGARY — After a very long wait, Kerri Einarson finally got to make her first appearance at the LGT World Women's Curling Championship on Friday. Her debut against the reigning Olympic champion did not go as planned.
Apr 30, 2021 9:36 PM By: Canadian Press 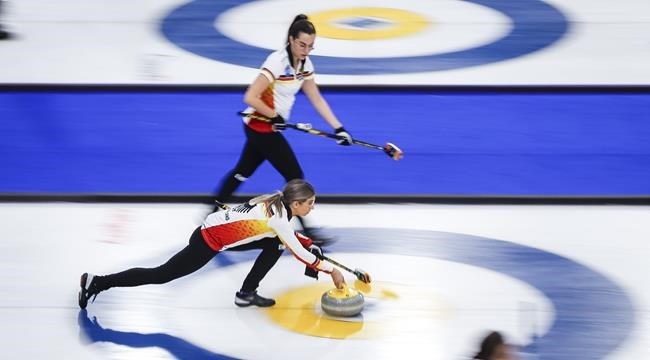 CALGARY — After a very long wait, Kerri Einarson finally got to make her first appearance at the LGT World Women's Curling Championship on Friday.

Her debut against the reigning Olympic champion did not go as planned.

Einarson gave up a steal in the 10th end when her final throw was heavy as Sweden's Anna Hasselborg escaped with a 6-5 victory in the afternoon draw at WinSport's Markin MacPhail Centre.

"We definitely can't get down because I thought we played really well," Einarson said. "We had an opportunity to win and it just slid by."

Einarson won the Canadian championship last year but the 2020 world playdowns were cancelled on the eve of the competition due to the pandemic.

Her Manitoba-based team of Val Sweeting, Shannon Birchard and Briane Meilleur successfully defended its Scotties Tournament of Hearts title last February in the curling bubble to lock up a world berth for a second straight year.

"It felt amazing to step on to the ice, finally getting this opportunity to play on the world stage," Einarson said.

The Swedes struggled early in the round-robin opener but Hasselborg cut the deficit to one with a delicate tap for a pair in the sixth end. The teams exchanged singles before Hasselborg stole a point in the ninth to make it a 5-5 game.

In the 10th end, Hasselborg made a nice draw to the four-foot ring under cover to put the pressure on the Canadian skip.

"I think it really showed our team spirit out there," Hasselborg said of the comeback.

Einarson, from Camp Morton, Man., bounced back with a 9-2, seven-end win over Anna Kubeskova of the Czech Republic in the evening draw.

The women's world championship is the seventh and final event to be held in the bubble at the Canada Olympic Park venue.

The leadup to the competition was marked by news that two German players tested positive for COVID-19 in pre-competition screening upon arrival in Calgary.

The 14-team event was given the green light to go ahead by public health officials on Wednesday.

All other players and team members have regularly tested negative over the last week. Germany was cleared to play as a three-player team late Thursday.

The shorthanded lineup of skip Daniela Jentsch, vice Mia Hoehne and lead Analena Jentsch dropped an 8-4 decision to Russia's Alina Kovaleva in the morning draw before responding with an 8-7 win over the United States in evening play.

The two athletes who tested positive remained in isolation. German second Klara-Hermine Fomm and alternate Emira Abbes were not available to play Friday.

"They're of course cheering for us but it's tough not to be with us right now," said Daniela Jentsch. "I think they hoped to be with us on the ice but they're supporting us from the hotel room. But yeah, they're OK, they're fine."

Normally a team must use four players but the WCF granted the rink an exemption at the 11th hour. The federation felt the situation qualified as an "extenuating circumstance" under competition rules.

"Obviously we're relieved that we can actually play," said Jentsch. "The last week has been a new experience to be honest, it's something we didn't prepare for. But I think we managed very well with the help of (others), so it's fine."

The April 30-May 9 competition is the main qualifier for the 2022 Beijing Games. The top six teams will qualify for the playoffs and secure Olympic berths for their respective countries.

There was a COVID-19 scare during the world men's championship earlier this month in the bubble but four positive results were all later deemed to be false positives.

The German athletes who are able to play Friday must undergo rapid testing and have a PCR test done every morning, the WCF said. Their teammates who remain in isolation will continue to be "medically managed" by competition medical officials, the federation said in a statement.

Organizers cancelled Wednesday's opening practice session. Practice went ahead Thursday but the Germans had to wait until the late evening before getting on the ice for the first time.

Defending champion Silvana Tirinzoni of Switzerland dumped South Korea's EunJung Kim 10-2, and needed only six ends to complete a 9-2 rout of Italy in the afternoon.

Scotland's Eve Muirhead posted a 10-6 victory over Tabitha Peterson of the United States and followed up with a 10-5 win over Japan's Sayaka Yoshimura to join Scotland and Russia as the only squads to go 2-0 on Day 1.

Four-person teams bring an extra player, called a fifth or an alternate, to major championships to draw into the lineup in the event of illness or injury. Three-player teams can be at a disadvantage when it comes to sweeping.

Canada is looking for its podium appearance at this event since Jennifer Jones won gold in 2018 at North Bay, Ont.

Chelsea Carey skipped the Canadian entry in 2019 at Silkeborg, Denmark, but didn't make the playoffs.