OTTAWA — Canada pulled out out of next week's Pan American Race Walking Cup in Ecuador due to concerns about COVID-19, erasing the final international opportunity Mathieu Bilodeau had to qualify for the Tokyo Olympics.
Apr 28, 2021 8:01 AM By: Canadian Press 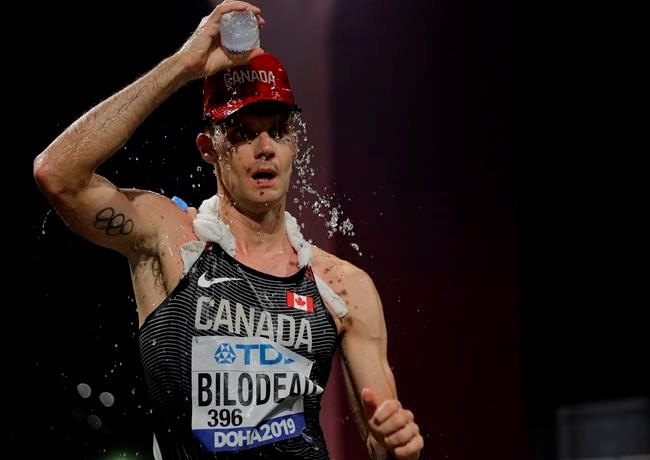 OTTAWA — Canada pulled out out of next week's Pan American Race Walking Cup in Ecuador due to concerns about COVID-19, erasing the final international opportunity Mathieu Bilodeau had to qualify for the Tokyo Olympics.

The decision was made due to potential exposure to the novel coronavirus over the course of a complicated travel plan for the May 7 event, as well as risks in staying and competing in Guayaquil, Ecuador, Athletics Canada said in a statement.

"It is very hard to judge from here what the COVID situation would be like on site," Simon Nathan, Athletics Canada's high performance director, said. "We are committed to our athletes' and coaches' safety and have worked hard to assess the risk associated with the event. In the end, we can not confirm accurate case counts, infection rates or other important details."

Nathan added that what is known is that hospitals and the health care system in Ecuador are overwhelmed and the death rate is very high.

"Couple that with the prevalence of variants of concern and variants of high consequence, and we have had to make this decision for the safety and wellbeing of our team."

Bilodeau, Alger Liang and Tyler Wilson made up Canada's team. Bilodeau, a 27-year-old from Quebec City, was aiming to clinch a berth in his second Olympic Games.

Nathan said he's still hopeful the Canadian 50km race walking championships will be held May 23 in Montreal, which would give Bilodeau another shot at qualifying.

"We will continue to do all we can to support his Olympic goals in a way that is as safe as possible," Nathan said.

Qualifying has been a massive hurdle for Canada's track and field athletes. Race walker Evan Dunfee has qualified for Tokyo by virtue of his bronze medal at the 2019 world track and field championships in Doha, Qatar.

But Canada also had to withdraw from this week's World Athletics Relays meet in Poland where the men's 4x100 relay sqyad, among other teams, had hoped to clinch a qualifying berth. Numerous Canadian athletes have travelled to the U.S. to compete in hopes of earning a spot.

The city of Guayaquil has been one of the hardest hit by the pandemic in Ecuador. A state of emergency was declared this past weekend, with 16 of the country's 24 provinces locked down. The country recently imposed a curfew between 9 p.m. and 5 a.m. on week days, plus a weekend curfew stretching from 8 p.m. Friday to 5 a.m. on Monday.

This report by The Canadian Press was first published April 28 2021.