CALGARY — Who will be the regular defensive partner of Flames captain Mark Giordano in a shortened season? It's among many questions that need to be answered in a short Calgary Flames training camp that began Sunday. T.J.
Jan 3, 2021 6:15 PM By: Canadian Press 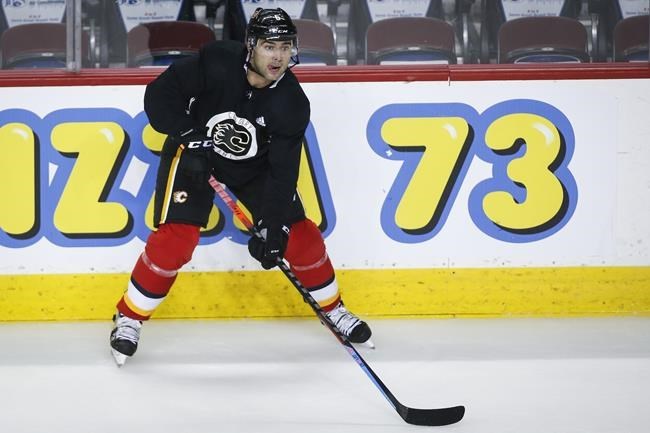 CALGARY — Who will be the regular defensive partner of Flames captain Mark Giordano in a shortened season? It's among many questions that need to be answered in a short Calgary Flames training camp that began Sunday.

T.J. Brodie signing with the Toronto Maple Leafs in the off-season leaves Rasmus Andersson the prime candidate to lock into the top defensive pairing alongside the 2019 Norris Trophy winner.

"The one thing that obviously sticks out most to me is his poise with the puck."

Another checkmark for Andersson is he's a right-handed shot, which complements the lefty Giordano.

"It'll be good to get together with whoever I'm going to play with early in camp, build some chemistry and get in some of those intrasquad games," Giordano continued.

"It's going to be a little bit different to start, but you've got to communicate and get used to each other quick because the season is a week and a half away."

Of the 45 players invited to Calgary's January training camp, 41 reported for medical and physicals Sunday and will hit the ice Monday.

The 24 forwards, 12 defencemen and five goaltenders who have reported will be split into Team (Lanny) MacDonald and Team (Jarome) Iginla at camp.

Intrasquad games are scheduled for Jan. 7 and Jan. 11 before Calgary's season-opener Jan. 14 in Winnipeg against the Jets.

Calgary's opponents over a 56-game regular season will be the NHL's Canadian teams.

The NHL created a Canadian Division to work around COVID-19 travel restrictions and get a 2020-21 season in.

Goaltender Jacob Markstrom was a coveted free-agent get for the Flames. The big netminder signed for US$36 million over six years.

"It's going to be super-competitive just because of the amount of games we're going to be playing against each other," Giordano said.

"With former teammates, or guys you played with a long time, you never want to let them get the best of you."

The Flames downed the Jets three games to one in the post-season's qualifying round. Calgary then fell in six games in the first round of playoffs to the eventual Stanley Cup finalist Dallas Stars.

"We know what our lineup looks like and how it works with how we ended up last year, but we've got some good new players that have come into our team and we've got to take a look at where they fit best within the team now," Flames head coach Geoff Ward said.

""There's nothing written in stone right now. We could be juggling people on a daily basis just to get a feel for that.

"Our job at the end of the training camp is to understand and be comfortable with what our best lineup is going to look like going into Winnipeg."

Calgary has made it past the first round of playoffs just once in the past 11 seasons with their last two eliminations particularly galling.

The Flames topped the Western Conference in 2018-19, but were ousted in the opening round by the Colorado Avalanche.

"We're pretty smart guys and when it comes to knowing there's not many years left on some of our contracts, we have to make something happen," said 37-year-old Giordano.

"We have a lot of guys who have been here for awhile. We haven't had the success we need to have in playoffs, and we need to change that."

This report by The Canadian Press was first published Jan. 3, 2021.