CALGARY — A lead is preferable, but Mikael Backlund wants the Calgary Flames to feel and play as though they're going to win even when the team falls behind in a game.
Feb 6, 2021 11:24 PM By: Canadian Press 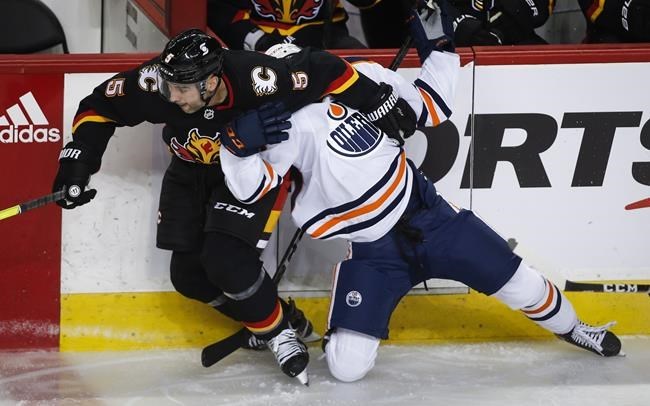 CALGARY — A lead is preferable, but Mikael Backlund wants the Calgary Flames to feel and play as though they're going to win even when the team falls behind in a game.

Backlund and Lucic scored in a span of fewer than two minutes early in the second period. Mangiapane assisted on both goals which ignited the Flames' attack.

"We've got to get that swagger back, that we know we're going to come back and we know we're a good team and it doesn't matter how games go."

Calgary is now 3-4-0 when trailing after the first period. They've done so in seven of their 11 games this season.

Backlund led the Flames (5-5-1) with a goal and two assists. Lucic, Johnny Gaudreau and Dillon Dube each contributed a goal and an assist to the victory.

Calgary's Sam Bennett and Elias Lindholm also scored as the NHL's Battle of Alberta commenced in a compressed 2020-21 season.

Calgary goaltender Jacob Markstrom stopped 28 shots for the win, including 16 in the first period when his team was outshot 17-3 and trailed 2-1.

"It takes a lot of volume shooting to score on that guy," Oilers defenceman Adam Larsson observed. "He had a solid night."

Oilers captain Connor McDavid had a goal and an assist, with Jujhar Khaira, Jesse Puljujarvi and Darnell Nurse also scoring for Edmonton (6-7-0).

"When you get six goals scored on you, there's a few things you need to clean up," Oilers defenceman Darnell Nurse said.

"We need to be better in our own zone, support each other in the middle of the ice and if we take care of that, we know we have enough offence."

Saturday's meeting was the first of 10 this season between Alberta's NHL teams and the first since the two clubs combined for over 100 penalty minutes Feb. 1, 2020.

That game, won 8-3 by the Oilers, culminated in a line brawl and a rare goalie fight at centre ice between Edmonton's Mike Smith and Calgary's Cam Talbot.

Saturday's game wasn't as fiery. The two clubs were more intent on eking two points out of the game.

Bennett scored his first goal of the season a week after his agent indicated the 24-year-old wished to be traded. Bennett was a healthy scratch in Calgary's 4-1 loss Thursday to the Winnipeg Jets.

Playing on a line with Sean Monahan and Gaudreau on Saturday, Bennett restored Calgary's two-goal lead at 10:57 of the third period.

"I think it's great for my personal confidence, but I think more importantly, it's the win for our team and the solid effort from everyone that really excited me the most," Bennett said.

Dube's power-play goal at 2:56 and Gaudreau scoring even-strength at 5:16 of the third period opened up a two-goal lead for Calgary, but Nurse narrowed the gap at 8:55.

Calgary led 3-2 after two periods with Edmonton's Puljujarvi knotting the score at 1:18 of the third.

The Flames donned retro jerseys Saturday featuring the flame-snorting horse head "Blasty", which was first worn in 1988-89 to commemorate the Year of the Cowboy.

The Oilers head east on their five-game road trip for a pair of games in Ottawa and one in Montreal.

The Flames are at home to the Winnipeg Jets on Tuesday and the Vancouver Canucks on Thursday.

This report by The Canadian Press was first published Feb. 6, 2021.