NEW YORK — Left-hander James Paxton is returning to the Seattle Mariners after an injury filled second season with the New York Yankees. The 32-year-old left-hander and the Mariners agreed Saturday to an $8.
Feb 13, 2021 10:05 PM By: Canadian Press 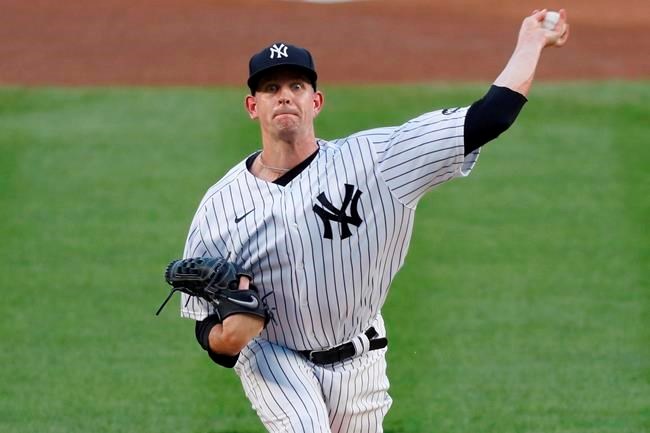 NEW YORK — Left-hander James Paxton is returning to the Seattle Mariners after an injury filled second season with the New York Yankees.

The 32-year-old left-hander and the Mariners agreed Saturday to an $8.5 million, one-year contract, a person with knowledge of the negotiations told The Associated Press.

The person spoke on condition of anonymity because the agreement was subject to a successful physical.

Paxton was 41-26 with a 3.42 ERA for the Mariners from 2013-18, striking out 617 and walking 168 in 582 1/3 innings. He was traded to the Yankees in November 2018 for a top prospect, left-hander Justus Sheffield, along with outfielder Dom Thompson-Williams and right-handed pitcher Erik Swanson.

Paxton struggled in the first half of his first season in New York, rediscovered his breaking ball in the second half and went 15-6 with a 3.82 ERA. He won a career-best 10 straight starts before leaving his final regular-season start after one inning that Sept. 27. The Yankees said he had a tight left glute muscle, and he returned to go 1-0 with a 3.46 ERA in three starts, allowing five runs in 13 innings.

But he needed surgery in February 2020, when Dr. Andrew Dossett in Dallas performed a microscopic lumbar discectomy to repair a herniated disk and remove a peridiscal cyst.

Paxton was able to start the season on time when the pandemic caused a delay until late July, but he went just 2-3 with a 6.64 ERA in five starts. He did not pitch after Aug. 20 after sustaining what the Yankees said was a low-grade strain in his left forearm flexor.

He became a free agent, and the Yankees let Paxon, Masahiro Tanana and J.A. Happ leave as free agents, replacing then with Corey Kluber and Jameson Tallion.