Two Montrealers among dead after stampede at religious festival in Israel

MONTREAL — Two Montrealers taking part in a religious festival in Israel were among the dozens of people killed when a stampede erupted early Friday.
Apr 30, 2021 5:58 PM By: Canadian Press 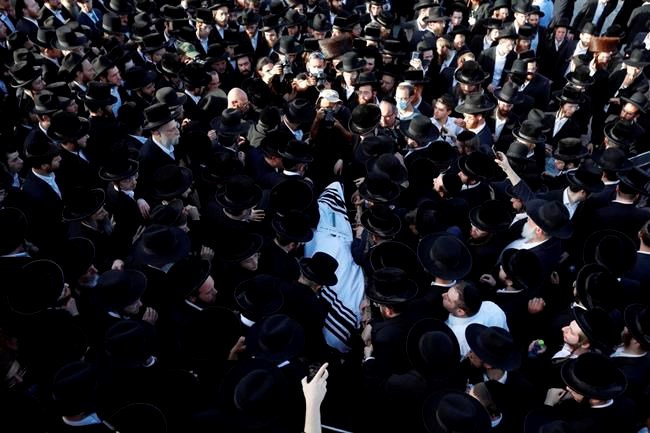 MONTREAL — Two Montrealers taking part in a religious festival in Israel were among the dozens of people killed when a stampede erupted early Friday.

Shraga Gestetner, 33, was a well-known singer in the ultra-Orthodox Jewish community, and Dovi Steinmetz, 21, was in Israel for post-secondary religious studies. Multiple sources identified them Friday as being among the victims.

Mayer Feig, a member of the Quebec Council of Hasidic Jews and a community activist, described Gestetner, who performed as Shragee Gestetner, as a "very, very giving person." He said he had left a successful music career to focus on helping vulnerable people in his community.

Gestetner, a father of six, was born in Montreal and moved to New York state after getting married, Feig said in an interview Friday.

Members of the Israeli government, including the country's president, called for members of the public to attend Gestetner's funeral Friday, said Rabbi Reuben Poupko, of the Beth Israel Beth Aaron Congregation, an Orthodox synagogue in Montreal.

"He was there in Israel all alone. All his family's here, and in keeping with the strictest application of Jewish tradition, he was buried immediately," Poupko said. "Because of the speed at which it occurred, no family was there .... There are strong bonds of loyalty within the Jewish world, and in a moment like this that loyalty is very tangible and very real."

Lionel Perez, Montreal's municipal opposition leader, said Steinmetz grew up in his neighbourhood and was close friends with his son. "He was good-natured, loved by all, always a friendly smile, always willing to help," Perez said in an interview. "Really representative of his family and of his parents. This is truly a loss."

Perez said he expects Israeli authorities to conduct an investigation, but "right now, it's a question of providing support and empathy to the families of the victims," he said.

Montreal Mayor Valerie Plante expressed her sympathy with the city's Jewish community and the friends and family of the victims in a post on Twitter.

Prime Minister Justin Trudeau said he was shocked to learn of the deaths.

"On behalf of all Canadians, Sophie and I offer our deepest condolences to the family and friends of everyone who lost a loved one at Mount Meron, and wish for a fast and full recovery of the many injured," he said in a release.

"We grieve with Israel and the Jewish community in Canada, and stand ready to assist in any way we can."

Israeli authorities said at least 45 people were killed and dozens more were hospitalized during the celebration of Lag BaOmer at Mount Meron in one of the country's deadliest civilian disasters. The celebration, attended by tens of thousands of ultra-Orthodox Jews, was the first mass religious gathering held in Israel since the country lifted nearly all coronavirus-related restrictions.

"This is a Jewish holiday that is celebrated every year, and last year it was impossible because of COVID restrictions that were in place at the time," said David Levy, Israel's consul general for Quebec and the Atlantic provinces. "So this year, it feels like many people felt that they wanted to make up for missing it last year, so there was a very big turnout."

He said it is too early to say what went wrong. "This is going to be thoroughly investigated, but the outcome is tragic," he said.

The stampede occurred at around 1 a.m. as people began to leave and thronged a narrow, tunnel-like passage. According to witnesses, people began to fall on a slippery ramp, causing others to trip and sparking panic.

Lag BaOmer commemorates the life of Rabbi Shimon bar Yochai, a second century Jewish sage and mystic, and marks the end of a plague. Mount Meron is believed to be where Yochai is buried.

"There's a great sense of optimism in Israel now about the future, about putting most of COVID behind them and then this tragedy strikes," Poupko said. "It's really, really very, very painful and difficult."

Feig said his son was among those participating in the event. He was not hurt, but for 45 minutes Feig was unable to reach him and he feared the worst. He said he can't imagine what the parents of those who died are going through.

"This is a shock and grief to the Jewish community worldwide," Feig said. "Tens of thousands of people from all over the world would attend. There are grieving families in New York, and Montreal, all over the world."

— With files from The Associated Press.