Twister terror in Ontario and border moves: In The News for July 16

In The News is a roundup of stories from The Canadian Press designed to kickstart your day. Here is what's on the radar of our editors for the morning of July 16 ... What we are watching in Canada ... BARRIE, Ont.
Jul 16, 2021 1:30 AM By: Canadian Press 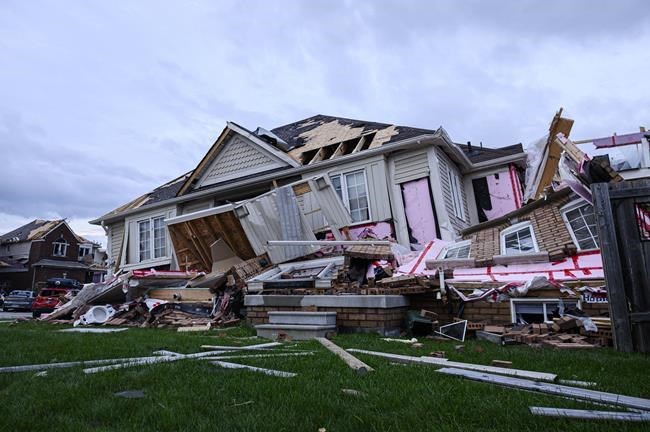 In The News is a roundup of stories from The Canadian Press designed to kickstart your day. Here is what's on the radar of our editors for the morning of July 16 ...

BARRIE, Ont. — The central Ontario city of Barrie will turn its attention to clean-up today after a tornado tore through a neighbourhood, damaging homes and injuring several people.

Paramedics have said eight people were taken to hospital, and several others were treated for minor injuries.

Crews are expected to start making some of the repairs today, including patching up roofs that weren't too badly damaged.

Mayor Jeff Lehman says the community has already started coming together to support those who lost the most to the tornado, donating food and supplies.

He noted it's a familiar scene to many long-time Barrie residents. A tornado killed eight people and injured more than a hundred others in the city in 1985. Hundreds of homes in the Allendale neighbourhood were destroyed.

"The scenes today are reminiscent of it," Lehman said. "I lived in that neighborhood as a boy. I mean, it's shocking, you know, you never expected to see it again."

And if the current vaccination rate remains on its upward trajectory, fully vaccinated travellers from around the world could begin arriving by early September, Trudeau told the premiers.

The news was quietly disclosed in the final paragraphs of a readout from the Prime Minister's Office of his call with the provinces and territories to discuss the response to the COVID-19 pandemic.

"The prime minister noted that, if our current positive path of vaccination rate and public health conditions continue, Canada would be in a position to welcome fully vaccinated travellers from all countries by early September," it reads.

"He noted the ongoing discussions with the United States on reopening plans, and indicated that we could expect to start allowing fully vaccinated U.S. citizens and permanent residents into Canada as of mid-August for non-essential travel."

Pressure has been mounting on the federal government to continue to ease the restrictions at the border, which have been in effect since March of last year.

But as Trudeau is widely believed to be on his way to triggering a federal election campaign, the timing of reopening the border could be a factor in his thinking.

CALGARY — "A" is for agriculture, "B" is for broncs, bulls and barrel racing, and "Y" is for Yahoo!

A new children's book has been released by writer Jennifer Webster and illustrator Karen Coe to capture the spirit of the Calgary Stampede.

It highlights the Greatest Outdoor Show on Earth with stories dating back to the first year of the event in 1912.

"I'm very partial to preserving western heritage and teaching the kids about the care that goes into the animals and that sort of thing because I really think a lot of it is being lost and the traditions and the stories still need to be told," Webster told The Canadian Press.

"Honestly, there's some really cool stuff about western lifestyle that I think people might really enjoy."

Webster said the inspiration for the book, called "S is for Stampede," came from her mother who encouraged her to document the event.

She said while younger children might enjoy the illustrations, it's mainly aimed at those between the ages of 8-to-14.

But he said after their face-to-face meeting at the White House on Thursday that they agreed Russia must not be allowed to use energy as a weapon.

The two discussed — though made no apparent headway — on differences over the Nord Stream 2 pipeline during a largely friendly farewell visit for Merkel as she nears the end of a political career that has spanned four American presidencies.

Other differences between the longtime allies include their outlook on the rise of China as a global power.

“On a personal note, I must tell you I will miss seeing you at our summits,” Biden said as he stood by Merkel, the second-longest serving chancellor in Germany's history, at a late afternoon White House news conference. "I truly will.”

Merkel, who had a famously difficult relationship with former president Donald Trump, showed her ease and familiarity with Biden, who has long been a fixture in international politics, repeatedly referring to him as "Dear Joe.”

Asked to compare her relationship with Biden to hers with Trump, Merkel remained diplomatic, saying only that it was in any German chancellor’s interest to “work with every American president." She added with a smile, "Today was a very friendly exchange.”

But their personal warmth notwithstanding, the U.S.-German relationship is entering new territory as Merkel, who is not seeking another term in September elections, nears her departure from office. There are concerns on both sides about how the two nations will negotiate growing disagreements.

The United States has long argued that the Nord Stream 2 project will threaten European energy security by increasing the continent’s reliance on Russian gas and allowing Russia to exert political pressure on vulnerable Eastern and Central European nations, particularly Ukraine. But Biden recently waived sanctions against German entities involved in the project, a move that angered many in Congress.

In one of the largest deployments of soldiers since the end of white minority rule in 1994, the South African National Defence Force has also called up all of its reserve force of 12,000 troops. Trucks, armored personnel carriers and helicopters are being used to transport soldiers to trouble spots in the Gauteng and KwaZulu-Natal province.

The violence erupted last week after Zuma began serving a 15-month sentence for contempt of court. At least 117 people have been killed in the violence, authorities said Thursday.

In a show of strength, a convoy of more than a dozen armored personnel carriers brought soldiers into Gauteng province, South Africa's most populous, which includes the largest city, Johannesburg, and the capital, Pretoria.

Protests in Gauteng and KwaZulu-Natal quickly escalated into a spree of theft in township areas, although it has not spread to South Africa’s seven other provinces, where police are on alert.

More than 2,200 people have been arrested for theft and vandalism, Khumbudzo Ntshavheni, acting minister in the presidency said Thursday. Many of those who died were trampled in chaotic stampedes when shops were being looted, according to police.

BERLIN — The death toll from devastating floods across parts of western Germany and Belgium rose above 90 on Friday, as the search continued for hundreds of people still unaccounted for.

Authorities in the German state of Rhineland-Palatinate said 50 people had died there, including at least nine residents of an assisted living facility for people with disabilities.

In neighboring North Rhine-Westphalia state officials put the death toll at 30, but warned that the figure could rise further.

Belgian broadcaster RTBF reported at least 12 dead in the country.

The flash floods this week followed days of heavy rainfall which turned streams and streets into raging torrents that swept away cars and caused houses to collapse across the region.

hockey star Wayne Gretzky married American actress Janet Jones in Edmonton. It was dubbed hockey's "royal wedding" and one of the biggest events in Edmonton's history.

NEW YORK — Celine Dion is rescheduling the 19 remaining North American dates of her Courage world tour — including four Canadian stops — due to varying COVID-19 restrictions in each city.

The dates, which were initially postponed to August and September 2021, will now run from March 9 through April 22, 2022.

Dion pushed the European leg of the tour to February 2022.

The new North American shows begin March 9 in Denver and end April 22 in Washington. Canadian dates are set for March 14 in Winnipeg, March 17 in Saskatoon, March 20 and 21 in Edmonton and March 28 and 29 in Vancouver.

"I know how frustrating it is for my fans, with all the postponements that have taken place these past 18 months," Dion said Thursday in a news release.

"My team and I are still concerned about everyone's safety this summer even though the situation has dramatically improved.

"We all feel 100 per cent comfortable that things will be very safe next spring and I want my fans to feel the same way, without any worries. I hope everyone understands."

Tour organizers said tickets purchased for the original 2020 and 2021 dates will be honored for the rescheduled 2022 shows.

VICTORIA —The federal government says cruise ships will be allowed back in Canadian waters in November, but they must follow public health requirements.

Transport Minister Omar Alghabra said the prohibition on cruise chops because of COVID-19 will be lifted Nov. 1, eliminating a ban that was in place until the end of February 2022.

In a news release Thursday, Alghabra said the $4-billion cruise industry generates about 30,000 jobs and is an important part of the country's domestic tourism sector.

"As Canadians have done their part to reduce the spread of COVID-19, our government continues to work hard to safely restart our economy and build back better," he said in the release.

"This is what we've been advocating for," he said in an interview. "For government to send a positive signal that cruise would be welcome back in 2022. It's a good day."

This report by The Canadian Press was first published July 16, 2021.